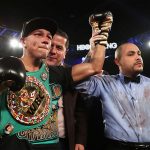 The proposed clash between WBC junior lightweight titleholder Miguel Berchelt and mandatory challenger Oscar Valdez, which was penciled in for December 12, had been postponed after Berchelt tested positive for COVID-19.

The 12-round bout was to have taken place at the MGM Grand in Las Vegas, as has been the case with all fight cards promoted by Top Rank, which co-promotes Berchelt. The fight would have aired on an ESPN platform.

According to ESPN boxing writer Salvador Rodriguez, Berchelt tested positive after being administered a COVID-19 test this week. Berchelt had taken a weekly test for COVID-19 over the last month or so as per protocol for the upcoming Valdez fight. Berchelt, who is also co-promoted by Zanfer Promotions, has been in quarantine since testing positive.

The clash between the two boxer-punchers from Mexico is one of the most eagerly anticipated in the sport. Both men throw a high volume of punches and their styles are sure to gel.

Berchelt (37-1 1 NC, 33 knockouts), who resides in the city of Merida, is rated No. 1 by The Ring at 130 pounds, and he is scheduled to make the seventh defense of his title. In his last bout on June 27, the 28-year-old stopped journeyman Eleazar Valenzuela in six rounds. However, since there was no commission present at ringside that night, due to the COVID-19 pandemic, the fight was later ruled a no-contest.

Valdez (28-0, 22 KOs) stopped Jayson Velez of Puerto Rico in Round 10 of his last bout on July 21. The former WBO featherweight titleholder, who hails from the city of Nogales, has now stopped three of his last four opponents.

Valdez is also promoted by Top Rank and managed by Frank Espinoza.

There’s no word on a new date but February or March are realistic targets. Top Rank promoter Bob Arum has stated in the past that he would prefer to have fans present.