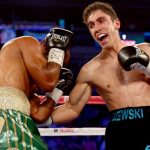 Welterweight contenders Mikael Zewski and Egidijus Kavaliauskas meet in a crossroads fight on Saturday that will go a long way to shaping the next stage of both men’s careers on ESPN+ (9 p.m. ET/6 p.m. PT) at The Bubble inside the MGM Grand, Las Vegas.

Zewski, who hails from Quebec, Canada, is eager to make the most of this big opportunity when he faces “Mean Machine”.

“I’ve been waiting for this kind of shot forever,” Zewski (34-1, 23 knockouts) told The Ring. “It means a lot, I’m excited, I’ve been asking for it. I told Top Rank and Yvon Michel that I wasn’t turning down anyone.

“[Kavaliauskas] just came off a loss to [Terence] Crawford, he did very good, it was a close fight. I feel if I go in there and beat him, like I think I can, then I can call out Crawford or anyone and it’s not going to be disrespectful to do so.”

The 31-year-old boxer-puncher appreciates that Kavaliauskas will present a tough proposition.

“He has a very good right hand, he dropped Crawford with it,” said Zewski, referring to Round 3 when Crawford went to one knee but didn’t receive a count. “He’s a quick counterpuncher, he makes his own pace and takes his time. You throw a punch and he comes back with four or five punches quickly. You’ve got to be sharp at all times, you cannot fall asleep.”

However, Zewski sees several holes in his opponent’s game that he is confident of exploiting.

“Mentally I think he’s coming back from the draw with Ray Robinson and now a loss to Crawford,” Zewski explained. “He definitely feels his career is on the edge. It will be hard to come back from a loss against me. A loss against me might mean retirement. His mentality has to be kind of fragile and I want to use that to my advantage.”

Although Kavaliauskas is physically imposing, Zewski is quick to point out that the Lithuanian may not get things all his own way.

“I feel I can move and box him, try to push him back. We’ll see how it goes in the first couple of rounds. Sometimes when he stands, his feet aren’t as fast as they should be. I can exploit that and go to work. My advantage is speed.” Zewski also believes a quick start will be beneficial yo make Kavaliauskas doubt himself after going winless in his last two bouts.

Zewski was a good amateur and represented his country at the 2009 World Championships before turning professional with Top Rank. He was progressing well and on the precipice of a big fight when he lost to Konstantin Ponomarev in May 2015. It has taken him until now to get back in position for this kind of chance.

“I choked [against Ponomarev] and I couldn’t fight at all. I wasn’t myself, so I lost,” Zewski admitted. “Everything fell down to the ground and I had to rebuild.

“I feel since I came back to Quebec I had opponents who challenged me. They weren’t great opponents, but they were guys who came to win and really tried, as compared to when I was just building my record.

“I went through a lot. I got my hand broke in the third round of my last fight [against Alejandro Davila] and knocked him out in the 10th round. I got my nose broke in the first round of a fight a couple of fights ago. Whatever happens in this fight, I think I’ll be able to handle it.”

Victory is imperative if Zewski is to reach his goal.

“I need to beat him to be considered as a legitimate challenge for any champion right now,” he said. “A big win would certainly give me that much credit.

“It’s never been about the money, the fame or the crowd. Obviously, I would love to make millions, and I would love to fight in front of fans, but my childhood objective was always to be world champion. I always wanted to have a Canelo or Mayweather type of career where you make multi-million-dollar fights. It didn’t turn out that way, but my goal was not to be a millionaire, it was to be a world champion.

“All the champions are good. I would fight any of them, but I feel Crawford would be my No. 1 opponent. I want to prove to everyone I can do it, but I also want to prove it to myself. After dedicating my life to the sport – my passion – I want to prove that I can compete against such a good athlete.”

Kavaliauskus also enjoyed a standout amateur career. He fought at the 2008 and 2012 Olympics and took bronze at the 2011 World Championships. The big-punching Lithuanian turned professional in 2013 and holds wins over David Avanesyan (TKO 6), Juan Carlos Abreu (UD 10) and Roberto Arriaza (KO 3). Kavaliauskus record stands at 21-1-1 (17 KOs).

The post Mikael Zewski: If I beat Egidijus Kavaliauskas, I can call out Terence Crawford appeared first on The Ring.