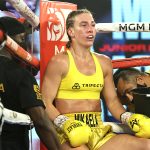 Mikaela Mayer has heard all the criticism.

“Undeserving of a world title shot!”

Mayer, 30, has taken it all in her stride, and instead of dwelling on other people’s opinions, she is eager to hear the words Saturday night that, in her opinion, have eluded her for far too long – “world champion.”

The unbeaten Mayer (13-0, 5 KOs) will challenge WBO junior lightweight titleholder Ewa Brodnicka at the MGM Grand Conference Center in Las Vegas. The 10-round bout will precede the main event between Naoya Inoue and challenger Jason Moloney.

The WBO enforced Brodnicka to defend the title against Mayer, who has been mandatory challenger for the past several months. The challenger, who grew up in the Los Angeles suburb of Woodland Hills and now resides in Colorado Springs, Colorado, believes that her title shot is long overdue and she is more anxious than nervous ahead of her big moment.

“Honestly, maybe there are other fighters who would feel nervous, but I’m very relaxed,” Mayer told The Ring. “I feel I’m deserving of this title shot. I’ve been the number one fighter to fight for the WBO title for a long time.

“I honestly thought when I fought in July against Helen Joseph that it would’ve been for a shot at the title, but I continued to wait. Now that I have my title shot, I can’t wait. It actually worked out perfectly. Coach Al (Mitchell) kept telling me that everything would work out and it did. I wouldn’t change [anything]. I think fighting for a world title after 13 fights is perfect. Over three years fighting as a pro and I’m now ready for my shot at the title.”

“This is what we had planned since Mikaela walked into my office nine years ago,” Ruiz told The Ring. “This is a culmination of what we worked on from her days as an amateur. People have thought she was a hype job, but she’s proven people wrong at every step. Mikaela is a fighter with a combination of power, speed and fundamentals. She’s surprised several of her opponents and she will be a surprise for Brodnicka Saturday night.” Brodnicka (19-0, 2 KOs), who resides in Warsaw, Poland, defeated Belgium’s Djemilla Gontaruk by one-sided 10-round decision. It washer fourth defense of the WBO title that she won by defeating Canada’s Sarah Pucek in April 2018.

Before the fight was made official, Mayer spent part of the summer calling out Brodnicka through Twitter but didn’t receive a reply.

Mayer believes Brodnicka wanted to bypass a fight against her because there were preliminary plans for her to face the other world titleholders at 130 pounds.

To prove her worth, Mayer wants to make a statement at Brodnicka’s expense.

“It’s funny how a lot of the United Kingdom fight fans wonder who I am as a fighter when [Terri Harper] skipped to the front of the line to get her world title shot,” said Mayer, who is rated No. 4 by The Ring at junior lightweight, one spot ahead of her opponent.

“I earned my status to be the No. 1 contender. It’s not like I came out of nowhere to fight for the title against Ewa. I deserve to be in against the best fighters in the division. I do need to make a statement on Saturday and send a message to the other fighters at 130 pounds, especially those that have a world title belt. I feel that I’m stronger, sharper and faster than Ewa. I’m the better fighter and my goal is end the fight [inside the distance.]”

Mayer’s journey has been well-documented, even before her days as an amateur. After attending four different high schools during three school years – she skipped classes, got into fights, and received bad grades – Mayer found boxing through Muay Thai and excelled.

After linking up with Mitchell, Mayer, to the shock of many, did not qualify for the 2012 Olympic team. She would qualify for the Olympic team four years later and was a favorite to medal but lost a close, disputed decision to Russia’s Anastasia Belyakova. Mayer would then sign a promotional deal with Top Rank and made her pro debut the following year.

Mayer looks back at her life and believes the challenges that she went through in and out of the ring have allowed her to persevere and make the most of her opportunities.

“It seems like every few years, I go through things in my life that make me stronger. I look back, not winning the gold medal, and the ups and downs, but things happen for a reason. I felt down then but I’m in a better spot now, especially with a world title shot. The hard work and perseverance has made me move forward on my journey.”

That journey could culminate with Mayer winning a world title Saturday night, but she believes there is so much more to accomplish. She is confident that she will continue to win world title belts in 2021 and, in her opinion, winning a title from Brodnicka is just the beginning.

“Winning the WBO title will be the tip of the iceberg,” Mayer said. “This is nowhere near where I want to be. I want to the undisputed champion at 130 pounds. I want to elevate women’s boxing and be the face of the division.”

“Saturday night is a steppingstone to bigger and better. I’m not going to celebrate winning the belt Saturday because there is more for me to accomplish. Once I become undisputed champion, then I will celebrate.”

Inoue-Moloney and Brodnicka-Mayer will be televised by ESPN in the U.S. and FITE.TV in the U.K.

The post Mikaela Mayer: I feel that I’m stronger, sharper and faster than Ewa Brodnicka appeared first on The Ring.