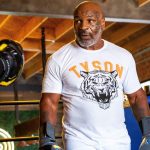 Mike Tyson should have been training and living like this, he says, back when he was in his 30s and 40s. He’s rinsed out the corrosive elements of his life, mentally, physically and psychologically, and he finds it refreshing that at 54, 15 years removed from the last time he was inside a pro boxing ring, that he’s still relevant. And yet, his celebrity is still a challenge for him.

“This s__t is crazy, man,” Tyson told The Ring in an interview on Friday morning as he prepared for his much-anticipated exhibition with Roy Jones on November 28 at Staples Center in Los Angeles and broadcast on TysonOnTriller.com or FITE TV (10 p.m. ET main card).

“At first, I started to think with everything happening around me, ‘This is why I quit (boxing in 2005 after losing to Kevin McBride),’” Tyson said. “I thought this was for a bigger cause. It’s almost like a reality show, but I don’t like being exposed like this. This is what it’s like. All of these cameras and these strange motherf_____s descending upon me. It was crazy that people thought that this was that important

“It’s still a handicap that I still matter. People knock on my door all of the time, coming right up asking to take a picture or asking for my phone number. How would you like that happening every day of your life? It’s like your life is not your own. You think that you’re safe because you’re behind a gated community, and this is a prosperous neighborhood. You never know. I’m always nervous, because something can always happen. It’s really weird. In my mind, that’s the illusion, I think I can go anywhere I want, anytime I want. I can’t. In my mind, I won’t let anyone imprison me, but I imprison myself. You don’t hear me out in clubs anymore, do you? Inside activity, I’m indoors.”

Tyson says he’s doing around eight rounds of sparring a day. He’s ripped and has lost over 160 pounds since when he weighed well over 300 pounds a decade ago. A young Mike Tyson and Cus D’Amato

“This is a lifestyle,” said Tyson, as he took a COVID-19 test. “I have 15 motherf_____s at my gym. Forget the five or six that work here. This is crazy, and it is humbling. I forget the time and the hard work that I put in. It’s why I give all of the credit to Cus D’Amato. He wanted me to have this lifestyle.”

Tyson was also asked about the trend he may have started with retired Hall of Fame fighters who are thinking about coming back, like Oscar De La Hoya, who over the summer said that he had begun training for a comeback at the age of 47. “The Golden Boy” has not fought since he deflated himself for his fight with Manny Pacquiao in December 2008, when he was stopped for the second time in his career.

“De La Hoya should come back, he can still fight,” Tyson said. “All of these guys fight because they get disappointed. A year or two goes by, and they start working out, they start looking good, and they start taking exhibitions here and they keep fighting. You’d be surprised at how well guys do when they comeback under the guidance of love.

“I want to do the right thing. I’m not here to show I’m tougher than anybody or smarter than anybody. I think what I’ve learned about myself, which I think is an interesting question, is that I want to keep pushing myself. For some reason, I wanted to push myself. At one point in my life, I wanted to die. I wanted to kill myself, then I found out that life is about the willingness to die. I listened to all of these motivational speakers and these mystics, and this meditation stuff, it’s all preparing us for our death.

“As soon as we’re born, the seconds start going for our deaths. We’re born to die, and we’re born to create and die. People will learn, people will write and people will lead. I have a 29-year-old. One or two (of my children) saw me fight when they were little babies. They’re not cool with that (Mike Tyson as a superhero legend dad). My kids see me act like a fool at the house. I’m not like the dad who is the superhero dad. I’m the dad who accepts his mistakes and continuing to move forward and developing friendships with my kids.”

“I always want to push the envelope.”

Tyson also said something interesting when the topic was broached of how time has changed the perception about him, and he’s evolved almost into this beloved, avuncular figure.

Asked if he’s ready to accept that, “Listen, people always used to come to me about being hated by other people, well, I hated me,” he said. “People can’t hate you, because they don’t know you. Only you can hate you, and you project that on other people. That’s what I did for years.” What can fans expect to see later this month when he fights Jones, “Expect to see an aggressive fighter, and I’m going to jump right at him.”

When asked if he would like to take this further beyond Jones, Tyson said, “Absolutely, but let’s take this one step at a time,” said Tyson, who weighs around 222, just above his prime weight of 217, 218. “I don’t want to stop at this one event. There are big superstars out there who are my status or more who want to get involved with this stuff. Can you imagine a one-on-one game between Metta World Peace and Dennis Rodman? You don’t think people would want to watch that?

“I’m grateful for my health, and I’m grateful to be in this physical state just to be doing this. I’m grateful that I have good people around me. I’ve been sober for the last three years. It’s why I got involved with this boxing stuff. I took this alternative medicine called ‘The Toad,’ (5-MeO-DMT, a psychedelic drug that comes from toad venom). It changed my whole life.

“I know it sounds crazy, and please forgive me for sounding like a mental case, but there’s magic out there in the world that people don’t even know about. I’ve been sober now for the last three years. For the last 15 years, no way. I’ve been trying to do stuff that will make me want to do some drugs. I’m trying, or I’ll think of something that will hurt me and will make me want to do some drugs, and I can’t understand why I don’t want to get drugs or high. I don’t know what it is that makes me think this way. I can’t imagine myself getting drunk or using cocaine, because I can’t really say I don’t want to get drunk or high. I can’t image myself being this way.

“Tell me what happy is?” Tyson asked. “I appreciate everything and I want to thank everyone for thinking of me.”

The post Mike Tyson gets candid, philosophical before his Nov. 28th exhibition with Roy Jones appeared first on The Ring.