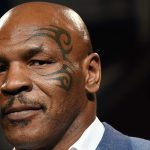 Mike Tyson will meet Roy Jones Jr. on September 12 in an eight-round exhibition bout, Tyson announced Thursday on ESPN’s First Take. The bout will take place in Los Angeles, Calif., Tyson said, though the venue was still to be announced.

Tyson said the exhibition will be broadcast on pay-per-view as well as the social video platform Triller.

Where there remains some room for clarification is about whether or not they will wear headgear, and what size the gloves will be. Tyson told ESPN that they’ll have to wear headgear, per California state rules, but Andy Foster, Executive Director of the California State Athletic Commission, told Yahoo Sports that he didn’t believe they’d be wearing headgear. Foster also said that the fighters would use 12-ounce gloves instead of the standard 10-ounce for heavyweights, while Guy Taylor, matchmaker for Roy Jones Jr. Promotions, said they’d use 10-ounce gloves.

“We’re both accomplished fighters, we know how to take care of ourselves,” Tyson said, dismissing concerns about their safety. “We’ll be alright.”

Tyson channeled his inner George Foreman, who championed the abilities of middle-aged people two decades ago by saying “40 is not a death sentence,” saying he still had the ability to perform in the ring.

“Just because we’re 54 doesn’t mean we have to start a new career and our lives are totally over. Not when you’re feeling as beautiful as I do and I’m sure other people feel the same way.”

Tyson, a former undisputed heavyweight champion, has lost three of his last four fights, and last fought in 2005, when he was stopped in six rounds by Kevin McBride. He returned briefly the following year for an exhibition bout with Corey Sanders, wearing a t-shirt while his opponent wore headgear.

Tyson had been teasing a return to the ring since April, when videos of himself training on the punch mitts were released on social media. Tyson, who said in 2013 he had weighed as much as 380 pounds after his career, looked much closer to the 220 pounds he had weighed during his prime, and showed explosiveness and aggression in brief videos. Roy Jones, who won world titles at middleweight, super middleweight, light heavyweight and heavyweight, last fought in February of 2018, defeating Scott Sigmon in a cruiserweight bout. While Tyson was enshrined in the International Boxing Hall of Fame in 2011, the only thing keeping Jones from a similar honor in Canastota was how recent he had fought.

The two came close to fighting in 2003, after Jones had defeated John Ruiz to win the WBA heavyweight title.

Tyson said the Jones exhibition would be the inaugural event of a “Legends Only” league, a seniors circuit of sorts for athletes who would otherwise be retired. He added that it wouldn’t be limited to just boxing, but would be open to MMA fighters, even basketball players to show their skills, and mentioned an Allen Iverson vs. Anfernee “Penny” Hardaway match-up as an example.

Tyson said he got the inspiration for such a league from watching retired San Francisco 49ers wide receiver Jerry Rice, who is 57 years old, showing similar speed and reflexes to his prime in videos.

“The people that we’re talking about now who society says is over-aged and washed up, they have a bigger fan base than the guys fighting and playing now.”

Still, while baseball legends come back for Old Timers games, boxing is a different sport, one that involves taking blows to the head. Studies have shown that adults become more susceptible to traumatic brain injuries as they get older. Kellerman cites Muhammad Ali, the heavyweight legend who suffered health issues in his later years, but Tyson brushed the concern aside, saying “Me and ‘The Greatest,’ we lived a different lifestyle.

“I never took that many punches after I fought the last few fights I had. I lived my life and I’ve been through some experiences and now I’m back here. I feel like I took better care of my body and state of mind than most of the fighters before me that retired and came back.”

Moments later, Tyson confronted the dangerous reality of boxing, mentioning the “unwritten clause,” where, as he puts it, “at any moment, during training or fighting, you can die.”

Headgear aside, Tyson hinted that he would not be pulling punches.

“I’m a neophyte at taking it easy. I don’t know how to do it that well, I’m just one-speed forward. I don’t know, Roy is just gonna have to deal with that.”

The post Mike Tyson will face Roy Jones Jr. in exhibition match on September 12 appeared first on The Ring.