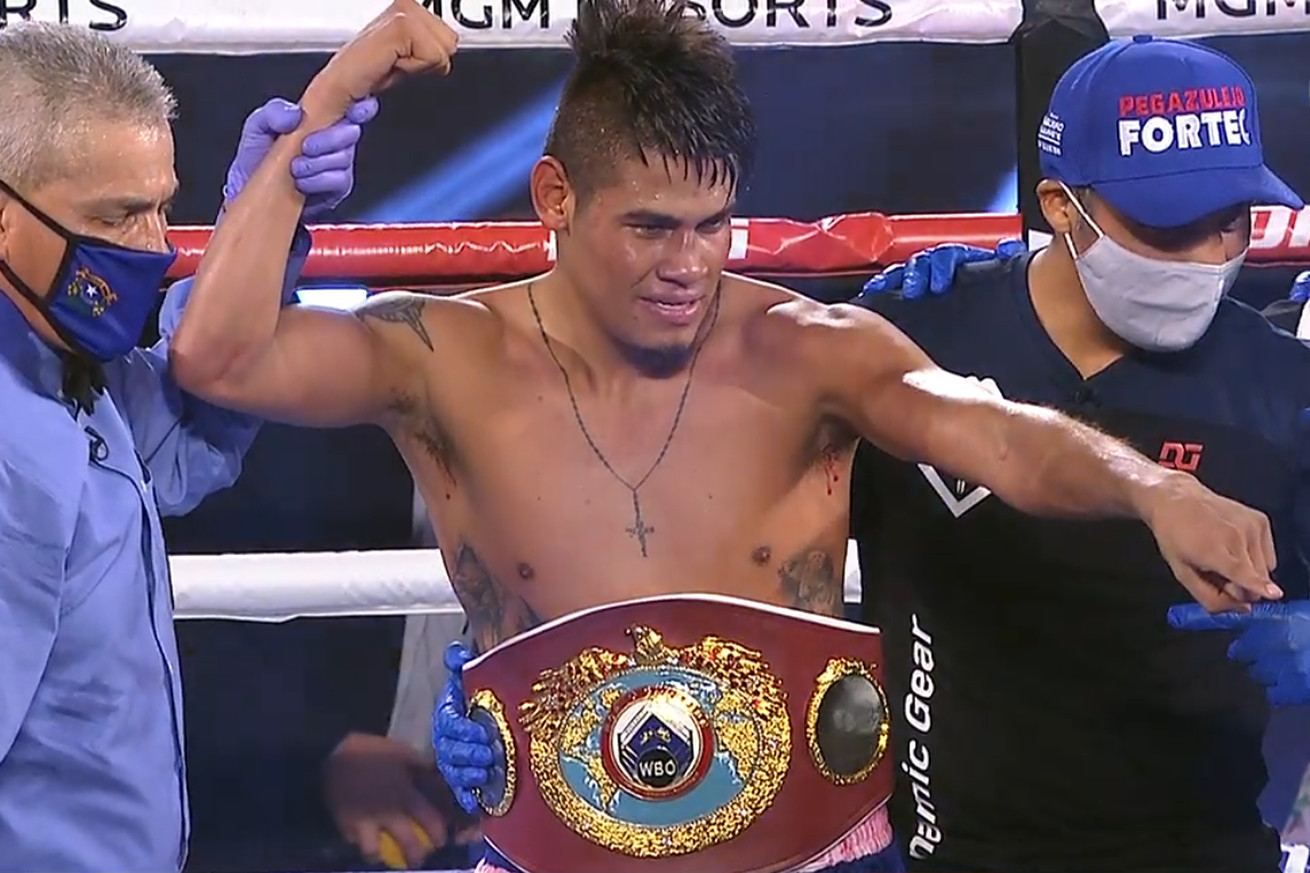 Emanuel Navarrete jumped out to a big early lead, but Ruben Villa stuck around and made a fight of it.

For six rounds, it looked like Emanuel Navarrete was just too strong and even too good for Ruben Villa, but Villa hung around and made a fight of things. In the end, two knockdowns made the difference, and Navarrete became a two-division titleholder, winning the vacant WBO featherweight title.

Navarrete (32-1, 27 KO) dropped Villa (18-1, 5 KO) in the first round on a left uppercut, and in the fourth round when he caught Villa open for a big left hand. Navarrete stayed in control in the fifth round, but Villa started turning it up a bit in the sixth, which led to a very interesting second half of the fight.

In that second half, Villa moved better, boxed better, landed some good clean shots, and started to adjust to the awkward, often reckless style of Navarrete, who found it harder and harder to land clean shots. Maybe Navarrete went on cruise control too early and couldn’t get out of it, but the scores wound up a lot closer than the first half of the fight would have predicted, and a lot closer than what the ESPN commentary team were calling, as it seemed they kind of halfway checked out of the fight in the fifth round and stuck to the early narrative that Villa was out-classed.

The scores, in fact, wound up being 114-112, 114-112, and 115-111 for Navarrete, and all were fair. They also mean that the knockdowns really won the fight, as this would have been a majority draw without at least one knockdown. That said, BLH also scored the fight 115-111 for Navarrete, and he deserved the win here, because the knockdowns were very real and definitely do count. Here’s a look at both of them:

FAST start for El Vaquero with the slick uppercut putting Villa down in R1 #NavarreteVilla | LIVE NOW on ESPN pic.twitter.com/magLW7mj1Y

All said, I think we wound up seeing a really interesting fight. Navarrete, 25, can definitely fight at 126, and his long reach and awkward style can give anyone problems. He’s also tough, it seems, and isn’t afraid to mix it up. But you have to wonder if Villa didn’t leave a lot of footage for future opponents to study, and if bigger punchers than Villa might not be able to land game-changing shots on Navarrete, who is far from a defensive wizard. We saw some of the limitations of Villa in the first half of this fight, but he acquitted himself nicely in the second half, and showed us some of Navarrete’s limitations, too.

Good fight, then. A lot to learn from this one, and wound up being a good matchup for both guys.

The co-feature saw 27-year-old Kazakh middleweight Janibek Alimkhanuly improve to 9-0 (5 KO) with a monster knockout of Gonzalo Coria late in the second round. Alimkhanuly had dropped Coria (16-4, 6 KO) in the first round, but blew him up with a right hook and a straight left, and Coria was flat-out at 2:59 of the second.

Alimkhanuly trains with Buddy McGirt and lives out in California now. There had been a bit of worry earlier in his pro career — which began in 2016 and he should really have fought more by now — about his power, but he’s won his last three by stoppage. Those weren’t exactly monster opponents (it’s also probably time for him to step up and face a decent middleweight) but they were all good power displays.

160 is starting to open up — Canelo is gone, GGG is getting old, you’ve got good titleholders in Charlo and Andrade who have some time left, but Alimkhanuly could find himself in a good position if he can keep winning.