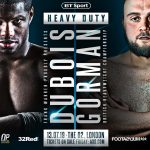 Nathan Gorman may have just become a father for the second time, but he is already focused on the biggest night of his boxing life.

He meets old amateur teammate Daniel Dubois at London’s O2 Arena on Saturday after his wife gave birth to a baby girl at 5 a.m. on Monday.

Gorman (16-0, 11 knockouts) was there for the birth, but soon had his mind back on the job, paying attention to a fight he’s always wanted.

“Two sleeps and it’s here, all the talking and all the work is done, it’s basically now getting everything right for Saturday,” he said, excitedly.

Gorman and Dubois (11-0, 10 KOs) are not friends. There’s an awkward competitiveness between them that adds to the stakes. They include the vacant British heavyweight title, although Gorman hopes to progress far beyond that.

“I don’t want to stop there,” he said. “My ambitions and dreams are way beyond British title level. My ambitions are world honors. I want to be the best I can possibly be and in my opinion that’s world title level. That’s where I’m aiming towards. This is just a little destination along the way.”

Both young guns have been afforded credit for accepting a dangerous fight early on in their careers. Many say the loser can come again and rebuild quickly. He can, but that is not something Gorman is willing to accept.

“There’s no safety net,” he said. “I want to win. There’s a lot at stake. The winner goes on; the loser goes back to the drawing board and has to work his arse off to get back to this position again. The winner has basically just opened five doors and walked straight through them, so that’s what we’re talking about here.”

And while the blood might be bad, it has not carried over into pre-fight smack talk or violence.

“The thing is, it’s not like I’m giving him bad lip, it’s not been sinister, it’s more mischievous,” Gorman smiled. “If I was to sit up there and start effing and blinding, I think a lot of people would think, ‘What’s up with Nathan today?’ They know me now. Basically, I’m just an honest lad.”

The bad blood stems from their amateur days, and Dubois, a quiet type, was hard to live with, said Nathan.

“Oh my God, it was like being there by myself,” he explained. “When you get back from training you want to have a craic with the lads and chill out because it’s tough, training. But it was very tough. We are two different personalities. It was what it was, but I changed rooms about a week after.”

Will they ever be friends?

He also draws confidence not just from their sparring sessions, but from Dubois seemingly running out of ideas against veteran Kevin Johnson.

“Kevin is probably the most masterful survivor of the game, he sits on the ropes and he’s got a coconut-head, but you’ve got to be more versatile with Kevin and I don’t think Daniel has that, he ran out of ideas against Kevin,” Gorman said. “But, on the other hand, he could have learned from that now he’s experienced it. Time will tell on Saturday.”

Trainer Ricky Hatton is convinced Gorman will shine under the brightest lights he has boxed under.

“It’s because of how much he wants it,” Hatton added. “He wanted the fight even before he met me, he’s wanted it so bad. I just can’t see him crumbling under the pressure. I think you can see by his demeanor, how he holds himself, how he talks, you can’t read into too much about someone’s mannerisms, I’d be more concerned if I was Daniel, but that might just be the way Daniel is. Nathan’s supremely confident, he had the better of him in their spars – he’s told me – from the GB squad and I do read into that because he’s so confident.

Hatton is expecting the leather to fly and for fans to get their monies worth.

“Very much so,” he continued. “I’m not sending him out to jab and move, I’m sending him out to hit him hard, have it out with him, make him miss and every time you make him miss, I want three-four punches coming back at him. Hopefully, Daniel will be hitting a lot of fresh air, which will slow him down as he’s a big, muscular lad. If he makes him miss and makes him pay, and chooses his moments when to box at a distance and when to box up close, I think it will be enough.”

For Gorman, the message is simple. The post New dad Nathan Gorman is looking to complete the job against Daniel Dubois Saturday night appeared first on The Ring.