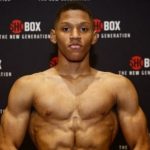 Best night of pro career and why: Norman is most pleased with his win on the non-televised portion of stablemate Brandun Lee’s “ShoBox” fight last March.

“I’d have to say my last fight with Flavio Rodriguez,” Norman told The Ring. “I wouldn’t say it was first step up but it was the hardest fight I’ve had so far but I actually did very good with it. I didn’t struggle really. He was a good opponent but I made it look easy.”

Worst night of pro career and why: The 19-year-old prodigy is disappointed that he was taken the distance by Zeus Valenzuela in August 2018.

“My first opponent I didn’t knock out,” he said. “I knew if I did more body work, I would have gotten the stoppage.”

What’s next: Norman returns in a scheduled eight-round contest against Juan Rodriguez Jr. at the Manuel Artime Community Center Theater, in Miami, on Saturday.

“I’ll wouldn’t say I’m going for the knockout but expect the knockout early and this will put me in the light.”

Rodriguez turned professional in 2009. The New Jersey native won his first 11 bouts before being stopped by Sammy Vasquez (TKO 1). He has since dropped into journeyman status, losing to Taras Shelestyuk (UD 8), Ivan Golub (TKO 1) and Jimmie Williams (UD 10). The 34-year-old has a record of 13-7 (5 KOs).

Why he’s a prospect: Norman was a talented amateur, amassing a handful of junior national titles in over 150 amateur contests before turning professional at the tender age of 17.

In the unpaid ranks, he fought and beat highly touted David Kaminsky en route to claiming the U.S. Junior Open in 2016.

Although he is based in Atlanta, far away from the training hotbeds around the U.S., Norman has sparred with Gervonta Davis when he was 15 and more recently the talented trio of Money Powell IV, Justin DeLoach and Charles Conwell.

Norman is blessed with heavy hands and is quick fisted but he feels he has other skills that shine through.

“The mental aspect of how I can push through anything,” he said. “Also I can adjust very well. No matter who it is, I know how to find my way to win. I can be a pressure fighter; I can be a boxer.”

While he looks naturally gifted, Norman quickly refutes the notion.

“[I’m] not gifted. Everything you see now, it may look gifted and talented but it all came from hard work,” he said. “My footwork is one of the best things I have, if you saw that at the beginning. I couldn’t even jump rope; now jumping rope is my favorite exercise to do. The only thing that is in my blood is the hard work part.”

Manager-turned-promoter Cameron Dunkin is known for having an eye for talent and is predicting big things for his charge. “I saw a film of at the Junior Nationals that he won in Dallas and I thought he was absolutely sensational,” said Dunkin. “He looked like a Roy Jones-type of guy. He had tremendous power with the left hook, a little bit with the right but his left hook was startling. He has so much skill and defense; he was just dominating people.

“I said, ‘This guy could really be special,’ and I called his dad. They wanted to stay in the amateurs for a while and then five, six months later, they called and were willing to go pro. We worked it out.

“He’s growing and getting better every fight. I think he’s going to be a sensational fighter because he’s not even close to his man strength.”

Dunkin, who has worked with Kelly Pavlik, Brandon Rios and Nonito Donaire and currently lists Jaron Ennis and Brandun Lee as his clients, is adept at maneuvering promising young fighters from grassroots level to world honors. He feels that Norman possesses everything he needs to be a top fighter in the coming years.

“He’s been on ShoBox twice but I want to put him on there in a good fight against somebody and let him show how good he is,” said Dunkin. “If everything goes well with this fight in Florida, that’s what I’m going to push for.”

Why he’s a suspect: Despite closing in on 20 fights, Norman is still very young and is in no rush. It is an important time in his career as he starts to step up against better opponents.

Having Dunkin steer the ship with his experience and know-how will be key going forward.

Norman knows he needs to improve across the board in all aspects of his game to reach the upper echelons of the sport.

Norman, who is definitely one to watch, looks the part and is talented but how will he react when he’s cut or hurt in a fight? Will he be able to compose himself and return fire? His power looks impressive but it will be interesting to see if he is still able to do the same to fighters at a higher level.

Storylines: Norman was born and raised in Atlanta. He has a large extended family but currently lives with his father and one sibling.

“I didn’t come from the hood or anything. I was very comfortable; I never really struggled,” he said of his formative years. “My dad made sure we ate; he made sure we went to school on time.”

His father Brian Sr. was a middling super middleweight in the 2000s, who notably went the distance with former light heavyweight titleholder Jean Pascal. Norman Sr. was often the B-side and went 17-11 (5 KOs) as a professional.

Norman decided he wanted to follow in his father’s footsteps when he was seven years old.

“My father had his last fight and I was in the garage; he came to me and said he was going to wrap up,” recalled the second-generation boxer. “And I said, ‘Can I start fighting?’ He asked if I’m sure; it’s very dangerous and, either that night or the next night, he started working with me.”

Norman’s favorite boxers are Mike Tyson, Marvin Hagler and Roy Jones Jr. but he has a healthy admiration for fellow Georgia natives Evander Holyfield and the late Vernon Forrest, who put his home state on the map.

“I thank them very much for doing that,” he said. “They gave Georgia fighters opportunities to fight on TV. Vernon and Evander paved the way so we could come through and keep it going. I will bring it all the way up.”

Norman, who has fought 13 times in Mexico as a professional, is very much under the radar. He feels he hasn’t gotten the attention other fighters have but believes that will change soon enough.

The youngster has a thirst for learning and to better himself. He enjoys spending time with family and helping people.