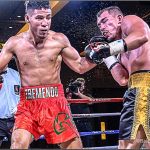 Best night of pro career and why: Castaneda is most pleased with his first fight for a variety of reasons.

“My pro debut on October 27, 2012,” Castaneda told The Ring. “Huge crowd at the Freeman Coliseum in my hometown of San Antonio, Texas, beating the soon-to-be Texas champion Albert Romero. At only 18 years old, this was a huge start to my career, coming out with the Michael Myers mask to give an entertaining Halloween showdown.”

Worst night of pro career and why: Tremendo’s own outside-the-ring indiscretions caught up with him in 2016.

“My 10th pro fight against Anthony Bowman, due to me failing a drug test (Marijuana),” he said. “I was at an immature state of mind having to gain big weight to fight Anthony Bowman. I beat him fair and square but was stripped of the win due to failed drug test.”

Next fight: The 25-year-old Texan will face the experienced Stan Martyniouk at the Silver Legacy Resort Casino, in Reno, Nevada, on Friday.

“I think highly of my opponent,” he said. “I’m expecting Martyniouk to come at me. I’m expecting an all-around ‘tremendous’ fight.”

Martyniouk (20-2, 6 KOs) was born in Estonia but moved to America when he was young and fought Internationally for America as an amateur, representing his adopted home at the World Cup in 2005. He turned professional in 2007 and won his first 10 outings before dropping a decision to unheralded Khadaphi Proctor. He had spells of inactivity, fighting just three times in four years, and dropped a decision to one-time prospect Ivan Najera in 2014. Since then, the now 34-year-old has won seven fights.

Castaneda will be favored to win but will likely have to go the full eight rounds in the process. Why he’s a prospect: Castaneda was a good regional fighter with mixed success nationally.

He won the Ringside Nationals in 2011 and back-to-back Texas State Golden Gloves in 2011, at 123 pounds and then in 2012 at 132 pounds. He represented Texas at the Golden Gloves nationally in 2011 and 2012. At the latter, he lost to eventual winner Albert Bell at the semi-final stage.

During his amateur career, Castaneda fought a slew of talented fighters. “I faced Damon Allen Jr., Albert Bell, Tramaine Williams, O’Shaquie Foster, Ray Ximenez and one of the Gary Antonio Russells. All great fights; I beat some and lost to some,” he admitted.

He didn’t try out for the 2012 Olympic Trials, instead following the lure of the professional game.

He feels his shot selection is one of his best strengths as a fighter: “I would say it is that I can combine many combinations from all angles.”

Why he’s a suspect: While Castaneda was a decent amateur and gained a lot of experience fighting many of the top guys in his weight classes, he didn’t thrive in the upper echelons domestically. It will be interesting to see if he is capable of mixing with some of those fighters now.

His 41 percent knockout ratio suggests he’s not a one-punch knockout artist. He is an active fighter and tends to get stoppages more through accumulation of blows.

In that regard, at times, Castaneda feels he’s his own worst enemy.

“Smothering my punches looking for the knockout,” he said. “I need to always stay composed and sharp, that way I do not waste strength.”

Storylines: Castaneda was born and raised in San Antonio. He is of Mexican decent and has always been around boxing.

“My early years growing up in San Antonio were great,” he explained. “I come from a tough family. Most of my family is in Mexico. I joined boxing due to looking up to my grandfather Nalo Mendez, who was a professional boxer in the 1960s in Mexico.

“Also my uncle Manolo Mendez – my grandfather’s son – was a pro back in the 1990s and he was one of Jesse James Leija’s sparring partners during his time. The fight game runs deep in my family.

“Being the baby, I was made to grow up tough, thanks to my older brothers who also had a good run as pro boxers.”

He took up boxing when he was nine years old because of his older brother Felipe “El Silencioso” Castaneda.

“We would take three buses to the West Side Gym every single day,” he said. “He was my first role model, besides my grandpa and uncle, and the rest is history.”

Castaneda stayed away from trouble and was a good student but boxing was always his first love.

“I was the good kid because I learned from my older brothers’ mistakes,” he explained. “I was an A, B honor roll kid throughout my whole life as a student. I made it to the University of Incarnate Word but dropped out because I turned pro at the same time and I chose boxing instead. The rest is history. I’ve lived by the boxing game my whole life. Hard work pays off.”

Castaneda is single and has no children. He focuses his time on boxing.

He has made ends meet outside of boxing by working for FedEx for the past four years, as a package handler.