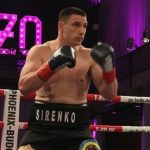 Best night of pro career and why: Sirenko is savoring every fight and the experience that goes with it.

“I feel like my best performances are coming but definitely I had some exiting fights so far,” Sirenko told The Ring through his manager Max Michailew. “For me, my first fight as professional boxer was unforgettable, and when I won my first [fringe heavyweight] title.

“I will remember every fight because every camp before is so tough but, at the same moment, full of good memories, and I had great people around me. I’m enjoying all of this.”

Worst night of pro career and why: The 25-year-old has won all 13 fights, with only one opponent hearing the final bell, and he’s scored 10 first-round knockouts.

“I’m happy with everything that I’ve done,” Sirenko said. “Of course, my team and I are getting some lessons and experience from my fights.

“We are working hard to get better. I’m happy that I have a chance to represent my country and show my culture to the world. I’m proud to be Ukrainian.”

Next Fight: Sirenko had been scheduled to face grizzled South African veteran Johnny Muller in Karlsruhe, Germany on March 28 before the COVID-19 outbreak.

“Our boxing evening was supposed to be broadcast on the Bild.de portal, Ukrainian Xsport and the Russian Match Fighter,” said Michailew. “Two weeks before, we had to notify everyone that the show was canceled. All tickets were bought for rivals, judges, our boxers, all fees were paid to sanctioning organizations.

“For three years we worked to reach this level; to get a chance to fight for titles. It was a shame to stop and step away from this.

“He was ready to fight in March, and in the fall he would have challenged someone from the top 50 in the division.”

“I took part in many competitions at the junior and adult levels and there were many top athletes,” Sirenko said. “Each competition was challenging and exciting at the same time.”

However, Sirenko, who clearly possesses power, isn’t taking his eye off the ball and is working hard to improve.

“When I was an amateur boxer, I realized that in order to achieve goals you need to work very hard and believe in your dream,” he explained. “The most important thing is to be disciplined.”

Sirenko has gained good experience fighting on the road in South Africa, America and Austria, as well as in his adopted homeland of Germany.

Michailew feels his young charge has a bright future.

“He is a very talented guy, he has discipline and he can punch with both hands,” said the manager. “No wonder he is the favorite sparring partner for Sasha Povetkin and Aleksandr Usyk. He is only 25 years old and I can say with confidence that the world will soon hear about us.”

James Ali Bashir, who has trained with many top heavyweights including Lennox Lewis, Shannon Briggs, Wladimir Klitschko and Usyk, has worked with Sirenko since the beginning of his career and sees vast potential.

“In my 51 years traveling to many parts of the world teaching boxers I have had my most success with the big guys,” said the trainer. “He’s a young, fresh, prospect who is definitely learning his craft, otherwise I wouldn’t be working with him. At nearly 69 years old I do not have any time to waste.

“We understand each other quite well. He knows that I will push him, just as he does me. Vlad is a naturally hard puncher, so my concentration is more centered around his boxing skills – offense and defense. When he understands thoroughly, he’ll be ready for the big time.

“I expect that Vlad Sirenko will become the heavyweight champion and go on to defend that position just as the Klitschkos, [Vasiliy] Loma, Usyk, and others from this region have done. Vlad is cut from that part of that Ukrainian tree.” Why he’s a suspect: Sirenko was a good amateur but didn’t fight at the biggest tournaments. Part of that is probably due to him turning professional at 22, which is young for a heavyweight.

“There are no boundaries for perfection,” Sirenko said. “Mostly I need to get fight experience; I need to get more rounds in my bag.”

Bashir is largely happy with how Sirenko is developing, however, he feels that his gunslinger attitude sometimes take over.

“Sometimes Vlad gets emotional in the ring,” said the trainer. “He gambles out of that emotional state. In boxing that’s a risk that he can’t afford.”

Storylines: Sirenko was born and brought up in the Ukrainian capital of Kiev. Boxing wasn’t his first love and he came across it in his mid-teens.

“I’ve been in sport from six years old, but my first sport was soccer,” he explained. “I was playing in a local team up to 15 years old, then our team broke up and I went to boxing classes. I loved sport the from the very beginning.”

From that point onwards, boxing played a key part in Sirenko’s life.

“I still remember my first fights and this kind of feeling,” he said proudly. “I will never forget and from this moment boxing becomes my everything.”

Sirenko lives in Ukraine, spends time in South Africa, where eight of his fights have taken place, and he trains in Germany. He is every bit the modern-day professional.

He has several boxing heroes, all of whom he admires for different reasons.

“When I was young, I used to watch Tyson and Holyfield fights,” he said. “I like Tyson for his attitude in the ring. I like Holyfield for his style and, like Wladimir Klitschko, he’s a gentleman and true legend. These people are my heroes.

“I am blessed that I have had a chance to meet Wladimir Klitschko personally and got some good words from him.”

In his down time, Sirenko likes to spend time with family, play soccer, travel and see new places.