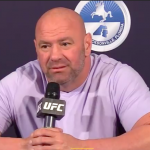 Two events down, one to go for Dana White’s UFC Florida flurry, and results are mixed, I think it’s safe to say.

Seems like the numbers were good for the Saturday night PPV, maybe 700,000 buys were achieved, and that number would prove the thinking that sports starved eyeballs will be amped to watch most anything. OK, not Aussie rules football replays on YouTube, but fresh content would be king, White knew, and that is seeming to play out vindicating common sense intuition.

As far as downside, it probably has to be interpreted depending on your political POV, as to that coronavirus positive status for Ronaldo Souza and his two crew mates. After the Wednesday night show 2 in Florida, White touched on it, minimally, at his post-event presser.

“He’s good,” said White, asking a PR person if Souza put out a release about his status. No release, he was told, but we’ll take White’s word for it, he said Souza tested positive and then basically right away drove home. No follow up questions from media, on what the company does regarding if they do follow up when one of their contractors is COVID-19 positive, and if White will be paying him for the fight he wasn’t able to engage in. NOTE: Souza did post a statement on Thursday afternoon, see below.

The White portion of the presser went into another direction, then, when a reporter referenced a NY Times story.

“Fuck that guy,” said White, dismissively. “Fuck that guy. You know what happened with that guy? That guy, who’s never covered the sport before, who’s writing a story about Endeavor, and then the UFC was one of the Endeavor, you know…whatta you think happened, when this guy and that paper covered the UFC when they’ve never covered it before it. Whatta ya think happened? The frickin’ story was huge, they did killer traffic. Now they’re writing stories three a week and they’re posting live results. I don’t give a shit what that guy thinks, what they have to say, or what he writes, good for him, he’s pulling good traffic. I don’t give a fuck. Don’t give a fuck,” he declared, appearing to give at least half a fuck.

“So far, so good,” he said, when asked for his assessment of the two fights in Florida, and noted that other sports leagues are more so talking about moving ahead, presumably because of how White fearlessly showed massive mettle. Only one positive test, he said, shows that their protocol is working, though I’m not sure why he left out the two Souza crew members. Masks are for wimps, is that the subliminal message White sent when going without during the Saturday face-off? Is this bravery, manliness, or ignorance? It probably depends on your political leanings.

“All the other sports leagues” were waiting for what White did, he said. “Somebody had to get out and be first,” he said, making sure to point out to anyone not cognizant that he’s a leader among men.

He said that another thing he noted was that gamblers were happy, because a live event gave them the opportunity to feel the thrill of victory. “Degenerates,” that’s actually what he called gamblers, funny terminology being that he’s well known for losing more on chips on a down night than he pays most of the fighters.

He also took a shot at Showtime’s Stephen Espinoza, who has mentioned that maybe he’d like to be a platform for a mixed card, pugilism and MMA. That’s not his thing, he said, he likes to keep the steak and seafood separate.

He then chuckled when asked about Top Rank saying they’ll be doing a show June 9. Reporters are bringing up “all the assholes,” looking to get a sound bite. Graciously, White said he’d tell White the “30 page plan” to do a DC (during coronavirus) event…but could he use Dana’s Apex in Florida?

He didn’t get into boxing much, thanking a reporter for not asking about Oscar De La Hoya.

A couple days ago, The Athletic’s Mike Coppinger posted a story which touched on White’s near term plans.

“The 50-year-old said he hired someone to run the day-to-day boxing operations and claimed a news conference in October or November would unveil the strategy for the new initiative,” Coppinger wrote. “I don’t know,” White said Tuesday on The Athletic’s “Pug and Copp Boxing Show” when asked if Zuffa Boxing would still come to fruition. “I have a lot of ideas on how to fix boxing. … I’ve been diving headfirst into the whole boxing thing for the last two years going through all the problems. They had big problems before the pandemic. … They have even bigger problems now.”

Maybe interesting, or maybe it means nothing, but White stroked Eddie Hearn when asked about the pugilism realm. “When this pandemic is over, the strongest will survive in this thing, and I don’t know who it’s going to be,” White said Tuesday to Coppinger and Lance Pugmire on their pod. “Al Haymon is a brilliant guy. I like Al a lot. … But the guy who to me is in a position of serious strength right now is Eddie Hearn. Eddie Hearn has some of the top guys in the world putting on these big heavyweight fights. And I think Eddie Hearn’s doing it right. When Eddie Hearn puts on a fight, Eddie Hearn actually makes money. A lot of these other guys aren’t making money.”

Money, about that…White said boxing promoters aren’t reinvesting in the sport the way he did with MMA, something he’s said for a decade. Point taken, but you know there is no shortage of his top level talent who grumble, in a whisper, because they fear his wrath, that there’s plenty of money for buildings and dividends to investors, but the portion of revenue going to the talent stays pretty static. Would his fighters, the one taking the risks to their brain matter, be happier if UFC matched boxing, MLB, NBA and NFL in percentage of revenue disbursed to the contractors, rather than making their campus more majestic? Rhetorical question. White said UFC 249 went well. It remains to be seen how many people involved in the three Florida shows will test positive…As many know, symptoms can heavily lag infection.

Also, you all likely know what I think on the issue, that White is a master at stirring pots and kicking cans. What about that “Fight Island” can? Two, three weeks the infrastructure for that fantasy island will be done, White said, so everyone can file that away and feed the frenzy of speculation.

White, it feels like, that mirrors many of the strategies in communicating that Donald Trump does.

The Athletic story made clear the level of his man crush:

Oh, and circling back to that NY Times writer, who White didn’t care about and made sure to mention that a few times, his name is Kevin Draper. And White was not correct when he portrayed Draper as a parachute artist. Back in February, the ex Deadspin writer wrote about UFC’s top draw, Conor McGregor. The Times has reported several times about legal issues hanging over the head of McGregor, who rivals White in the area of profane charisma, and seemingly surpasses him in terms of crossing lines that get looked at by law enforcement.

Last November, Drapers’ byline attached to UFC stories, so either White didn’t know that, or he was lying when he said Draper is just a Johnny Come Lately. To the contrary; here is a 2016 Draper byline that I’m bet White was told about.

If you didn’t read the Draper piece, basically the writer said there was a gulf between how UFC said they’d proceed with the UFC 249 event and the Wednesday card, and how they actually prosecuted the fight nights (excerpt below). “Team Dana” types rallied round the oft belligerent blowhard from Boston; people like UFC earlier-days standout Pat Miletich used a card from the Trump deck, and took a slap at media as a whole. He didn’t seem to specify, that I saw, what if anything Draper got wrong.

“The viral test used by the U.F.C. takes at least 24 hours to get results, and it was not discovered that Souza had the virus until Friday,” the NYT text specialist wrote in the article that White said he didn’t care about. If I’m bosses at Endeavor or Disney and ESPN, I’d not like to hear that. White dismissing what looks to be quite valid criticism in a critique from the world’s leading daily publication makes him look petulant, and ignorant, not intrepid.

Here’s another Draper section that White also really probably doesn’t care about. “Major American sports leagues, especially in team sports, are confronting very different circumstances from those encountered by the U.F.C. They have hundreds or thousands of athletes and even more staff members. They play home-and-away schedules in two dozen states, each with different local government mandates. They have 500-page collective bargaining agreements with athletes that restrict the terms that commissioners can unilaterally impose. (U.F.C. fighters are not unionized.)” You can bet dozens of UFC contractors read the Times piece and noted to themselves that the sports that have solid unions are being smarter, more cautious about returning to action.

Hamilton Nolan, one of the handful of new era labor leaders, a reporter at In These Times and Writers Guild of America-East member, weighed in. “There’s no reason UFC fighters couldn’t unionize,” Nolan told me. “They’re actually in a perfect position to do it, because they’re all working for a single organization. If a few fighters who were respected would step up and be leaders, it could absolutely be done. Ultimately the fighters are what people are paying to watch, and if they are willing to unite and withhold their labor, the UFC will come around and bargain with them.”

And this flew under lots of radars, because the daily spew of news is of such a shit show variety, that those inclined to enlarge their empire or leverage over those beneath them on the power grid can try these sorts of power grabs…But check this out.

“UF.C. 249 participants — including fighters, their cornermen and reporters who attended in person — were asked to sign a participation agreement before the event,” Draper reported. “The agreement, a copy of which was obtained by The New York Times, said fighters could lose their “purses, win bonuses, other fight-related bonuses and event-based merchandise royalties” if they “suggest or communicate” the event was held “without appropriate health, safety or other precautions.”

Luckily, the organization got caught trying to insert this “chill poison pill” language after media spoke up and said hell no, we won’t sign something that seems to try and limit disseminating opinion which may be at odds with the company’s stance.

Bottom lining it, here’s my opinion, if Dana White pretends to care or not: that Times piece made him and the organization look slap-dash, and even if he doesn’t care, people at Endeavor, Disney and ESPN do.

The post New York Times reporter hits a nerve, or three, in Dana White appeared first on The Ring.