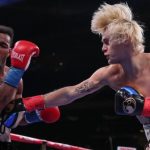 The undefeated middleweight was sparring one day in his hometown of Brooklyn, New York, when one of his teammates gave him a nickname that has stuck with him since.

“I was the only white kid in my gym,” Ababiy said. “A majority of our gym consisted of African Americans; one of them was like, ‘He’s white with a lot of rhythm. Let’s call him ‘White Chocolate,” and the rest is history! I was being pretty flashy.”

The 21-year-old Ababiy (8-0, 6 knockouts) aims for another sweet victory when he takes on Jarvis Williams (8-2-1, 5 KOs) in the opening bout of a five-fight DAZN card, on Saturday, from the streets of Tulsa, Oklahoma.

“I don’t know anything about Williams,” Ababiy said, “but I’m treating this as a world championship fight. You never know what you’re up against. I’m excited to get in there and show the world what I do best.”

Ababiy, whose mother is Ukrainian and father is Russian, had over 160 amateur fights, “with about eight or nine losses.”

However Ababiy told The Ring that his amount of defeats should have been far fewer.

But despite taking losses in those fights, Ababiy saw them as opportunities to put more in the toolbox.

“Losing is never fun but those were all lessons,” Ababiy said. “The most important thing in the amateurs is to get experience and I also learned a valuable lesson in how I should approach the professional ranks too. Don’t let the judges have a say. When in doubt, knock him out.”

Ababiy doesn’t yearn to be the hot prospect who struggles to obtain fights simply due to his dominance.

“I hope it doesn’t come to that point but yes, 100 percent, I would move up in weight just to get fights under my belt,” Ababiy said. “That’s my future move anyway. I know I can’t stay at 160 pounds forever, so if that ever comes across, I’ll move up to 168.

That said, Ababiy already has another idea in mind if he is offered a title fight.

“I’m actually thinking about going down to junior middleweight,” he revealed. “The idea is to slowly move down to 154, win a title and then move up to 160 and so on. I see myself winning titles at 168 and possibly even more than that.”

Ababiy is coming off a victory over Jonathan Batista, who embarrassed himself last November after he threw punches long after the bell, resulting in a first round disqualification.

The post Nikita Ababiy: Lessons learned and planning for the future appeared first on The Ring.