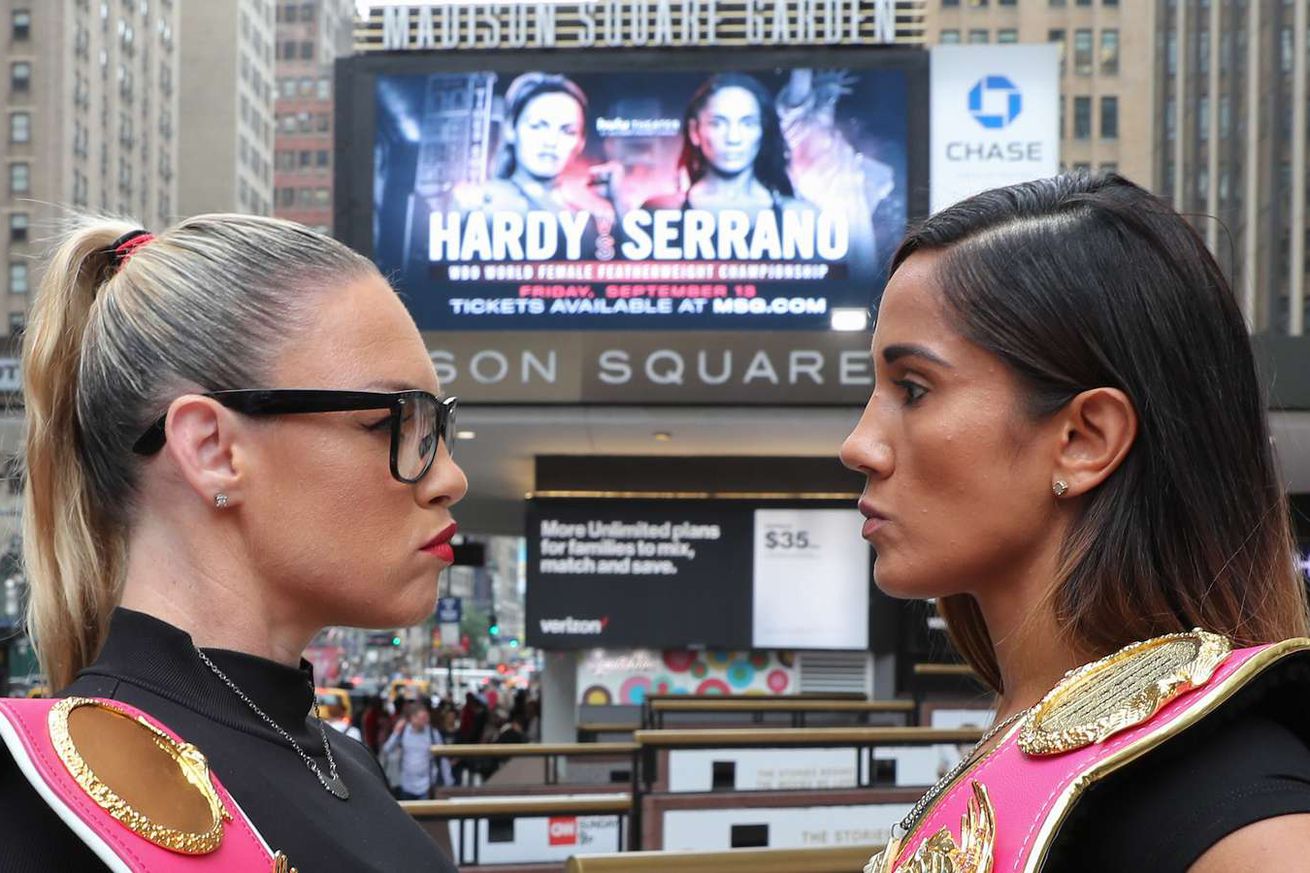 Heather Hardy and Amanda Serrano are set for a big fight next month in New York.

It is a New York super fight, pitting two NYC ladies who’ve known each other for a long spell, have sparred, and if they aren’t besties who chill together, they are two athletes who have a solid reservoir of mutual respect percolating as they count down to their Sept. 13 clash at the Hulu Theater at Madison Square Garden.

On Tuesday, Heather Hardy, the 37-year-old single mom from gritty Gerritsen Beach, Brooklyn, and Amanda Serrano, the 30-year-old pugilist who has won crowns in eight different divisions, making her the boss at calibrating diet and workouts to make weight class limits, did heavy-duty press to hype their scrap.

DAZN will screen the faceoff between the two Brooklyn fighters promoted by Lou DiBella, and Hardy’s WBO featherweight title will be up for grabs.

The hyping started out with a photo op at Madison Square Garden. The fighters, both looking deceptively stylish, dutifully stared at each other. Both in little black dresses, both of them with sneakers on to add an element of comfort in opposition to the tilt toward dressiness.

And then, Hardy lost it, cracking up. Did Serrano tell a dirty joke or something?

”Well, it’s awkward as fuck! We stare at each other for, like, minutes straight. It’s like we’re getting married,” Hardy explained. “Plus Amanda and I are all business, these things are just photo ops and for the press to hype the fight.”

So, the dynamic between them is business — no underlying simmering, turf war vibing going on? “Completely. Two confident champions. It’s gonna be a good fight!”

Hardy continued, admitting she got a bit teary when she saw herself on a billboard at MSG. “I cried! All I could think was, I wish my mom could be there to see that!” (Her mom is, for the record, alive and well, she was just otherwise detained and couldn’t make the 9:30 am ET photo op.)

After the stare down and crack up, it was off to a media luncheon atop the Brooklyn Bride Hotel. They took queries from fight-writers and videographers. Any highlights for Hardy?

“So he says, ‘Well let me ask you, let’s say they took this fight and offered you a million dollars, but you would have to fight in Saudi Arabia, where the government openly discriminates against women and minorities, would you sacrifice your beliefs and go fight there?’

Probably wise; there’s enough to get hyped about, with the stakes being what they are, the price that can be paid if you lose can be unfathomable. So Hardy probably made the smart choice, to maintain focus and not disperse energy needlessly.

No extra hype needed, then. Hardy debuted as a pro in 2012, Serrano in 2009. They didn’t try to get under each others skin, look to score a pre-fight point by belittling the other. Sounds like it was pretty drama free. Nothing Serrano said caused a ripple or a wave?

”Nothing at all. We stayed to ourselves. Took pictures when we were asked, did interviews when they asked. Exchanged a few words simply because staring each other dead in the face six inches from each other is awkward as fuck. Real business, Woods. Like always we’ve both been in this game too long for antics, this fight speaks for itself — we don’t need outside hype!”