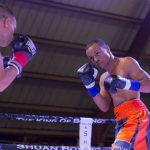 Junior bantamweight contender Norbelto Jimenez will return to the ring on May 30 against a familiar foe.

Jimenez will square off against Eliezer Aquino in a 10-round bout at the Coliseo Carlos ’Teo’ Cruz in Santo Domingo, Dominican Republic. The fight will air live on ESPN Knockout throughout Latin America and the Shuan Boxing YouTube page (8 p.m. ET/ 5 p.m. PT).

No fans will be in attendance, per regulations put in place by health officials in the Dominican Republic due to the COVID-19 pandemic.

The fight between Jimenez and Aquino will be a rematch of their May 2013 clash, which ended in a draw after the fight was stopped due to an accidental clash of heads in round five.

After beginning his pro career losing eight of his first 11 bouts, the 29-year-old Jimenez went unbeaten in his next 30 bouts and earned a mandatory world title shot before the loss to Yafai.

Aquino (21-4-1, 14 KOs) stopped Jorge Barreto after round 3 of his last bout on November 30. He has split his last eight bouts, with his two most notable losses coming at the hands of Adam Lopez in July 2015 and to Emmanuel Rodriguez four months later.

In the co-feature, Jackson Marinez will face Starling Wilson Castillo in a clash of unbeaten lightweights.

Marinez (19-0, 7 KOs) made quick work of Mexico’s Yardley Armenta in his last bout on December 28, winning by knockout in the second round. Marinez has displayed more power and aggression in recent fights, stopping three of his last five bouts.

Wilson (12-0, 9 KOs), who is represented by Sampson Lewkowicz, stopped Miguel Tavares in his last bout on February 22.

Four more bouts will round out the card.

The post Norbelto Jimenez faces Eliezer Aquino in closed event on May 30 in Dominican Republic appeared first on The Ring.