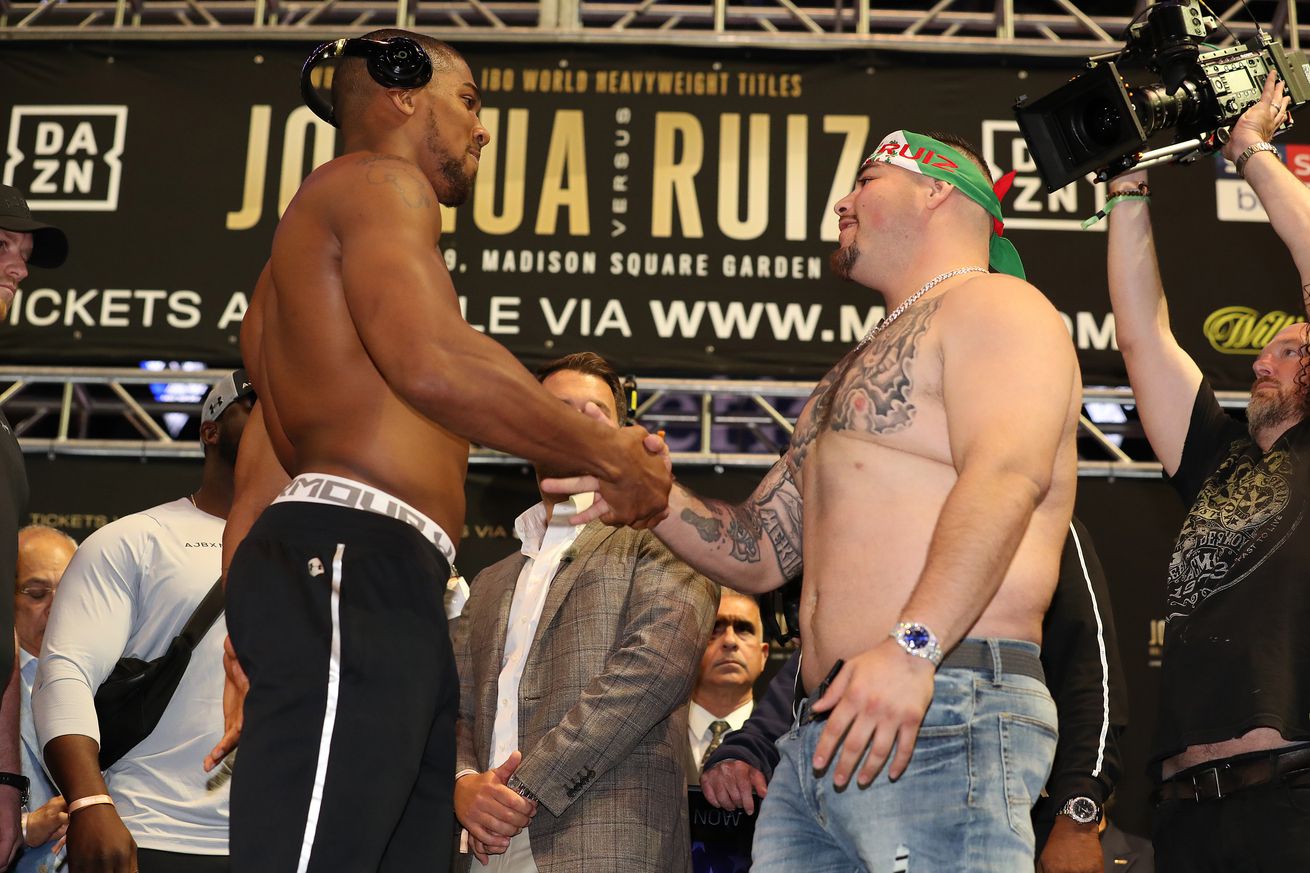 Anthony Joshua, Katie Taylor, and Callum Smith are the big names defending world titles, and all are expected to win.

[Disclaimer: I wouldn’t bet your money on fights, I’d just pocket the money you gave to me and scamper away into the night. This is not betting advice. We’re just telling you where the odds are and how the fights are being seen on the books.]

Hey, guess what? The 6’6” guy who looks like The Heavyweight Champion is a massive favorite against the 6’2” who looks like a home audio salesman at Best Buy.

Anthony Joshua is between -1800 and -3300 against Andy Ruiz Jr, who is listed between +900 and +1400. Anyone who’s seen Ruiz fight can tell you he’s not a bum they found on the street, he’s a legitimately skilled fighter. But this whole thing is bad optics to anyone, non-fan or diehard alike, and Ruiz has also never beaten anyone near Joshua’s level. An upset here would rock the foundations of the division.

The other two world title fights are not seen as particularly more competitive.

Katie Taylor is between -1250 and -1800 to become the undisputed lightweight champion against Delfine Persoon, who is between +575 and +1075. Persoon has the longer pro record, but Taylor’s time in the amateurs was spent fighting better opposition than Persoon has faced as a pro in Belgium. I expect books took a bath on installing Claressa Shields as only around a -350ish favorite against Christina Hammer in April, and they’re looking to show they learned a lesson here.

The undercard fights are all about as expected. Josh Kelly is between -476 and -650 for his fight with crafty vet Ray Robinson, who is between +310 and +501. Robinson might give Kelly some style issues, but asking him to actually win could be too much.

Joshua Buatsi, a rising light heavyweight, is between -5005 and -12500 against Marco Antonio Periban, a veteran super middleweight who hasn’t fought in a couple years. Periban is between +1200 and +2695.

The most evenly matched fight of the show is expected to be the 140-pound meeting between Chris Algieri and Tommy Coyle, which is also the estimated fight of the night in terms of competitive action. Algieri is between -252 and -450, with Coyle between +208 and +260.

In the FS1 main event, Devon Alexander is not a huge favorite against Ivan Redkach despite having the better résumé by far and being a two-division titleholder. He’s the solid favorite, but not really big. Alexander is between -303 and -455, with Redkach between +225 and +342.

The co-feature will see Hugo Centeno Jr and Willie Monroe Jr meet in a 10-round middleweight bout. Monroe, a two-time title challenger, is the slight favorite, listed between -158 and -189. Centeno is between +127 and +154, so that one’s close to a toss up on the books.

Onoriode Ehwarieme does have odds listed, but the odds are for his originally scheduled fight against Rodney Hernandez. He’s actually fighting Rodney Moore now. (Not that one.)

On the FS2 prelims, Filipino featherweights Jhack Tepora and Marlon Tapales are huge favorites. Tepora is between -4550 and -10000 against Jose Luis Gallegos (+1301 to +2450) and Tapales is between, uh, -4550 ad -10000 against … hey wait a minute these are the exact same odds for both fights. I guess that makes sense, they’re essentially the same fight. Also no offense but if you’re betting on FS2 prelim fights you might wanna call one of them hotlines.

In the main event from Cardiff, Wales, Jay Harris is favored between -450 and -650 to beat Spain’s Angel Moreno and win the vacant European flyweight title. Moreno is between +250 and +471.

Craig Evans beat Stephen Ormond back just under two years ago, and the oddsmakers like him to do it again. Evans is between -300 and -455, with Ormond between +210 and +348.