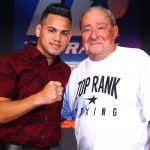 The announcement of the signing comes as no surprise as it was rumored over the last several days that Ramirez was close to finalizing a deal with Top Rank, which several in boxing consider the best at developing amateur standouts to becoming world titleholders.

After winning gold medals at the 2012 and 2016 Olympic Games, the 25-year-old Ramirez was considered a favorite to win his third gold medal at 2020 Games in Tokyo. It was during a training camp in Mexico in July where Ramirez defected from the Cuban National team.

“What a gift to sign a two-time Olympic gold medalist like Robeisy Ramirez,” said Top Rank chairman Bob Arum. The last two-time gold medalist that we signed out of the amateurs, Vasiliy Lomachenko, has become a big star. We anticipate the same from Robeisy. He is truly a special talent, and he has what it takes to get to the top of the featherweight division in short order.” Ramirez will compete in the same weight division as Shakur Stevenson and Michael Conlan, both of whom also fight under the Top Rank banner. In the 2012 Olympic Games in London, Ramirez defeated Conlan in the semi-final bout and Tugstsogt Nyambayar in the final to win the gold medal.

Ramirez defeated Shakur Stevenson in the final to the win the gold medal at the 2016 Games in Rio de Janeiro.

“I am thrilled to begin my professional career with Top Rank,” said Ramirez. “This moment is the result of the all the hard work, dedication, and sacrifice I have made since my days as an amateur boxer in Cuba. I look forward to continuing the successes I had at the amateur level in the professional ranks, and my fighting style will keep the fans entertained. Thank you to Bob Arum and Top Rank for giving me this great opportunity.”

The southpaw Ramirez will train in Gulfport, Florida and will work with trainer Rob Mendez.

Francisco A. Salazar has written for RingTV.com since October of 2013 and has covered boxing in Southern California and abroad since 2000. Francisco also covers boxing for the Ventura County (Calif.) Star newspaper, Boxingscene.com, and FightNights.com. He can be reached by email at santio89@yahoo.com or on Twitter at @FSalazarBoxing