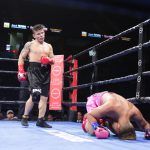 Jhack Tepora had hoped to end his forgettable 2019 on a high note. Instead, it ended with his first pro defeat.

Tepora (23-1, 17 knockouts) was knocked out at the 1:30 mark of round one by Oscar Escandon Saturday on the Tony Harrison-Jermell Charlo II card at the Toyota Arena in Ontario, Canada. The hard-punching Colombian Escandon (26-5, 18 KOs) blitzed Tepora from the opening bell, and then connected with a left hook to the body which put the Cebu City, Philippines native down for the count.

“That’s boxing. Sometimes you win, sometimes you lose,” said Tepora, 24. He adds that, other than a bit of pain on his hip bone, he’s otherwise OK.

Tepora is the second MP Promotions boxer to suffer a defeat in the U.S. in recent weeks, following Marlon Tapales’ TKO loss to Ryosuke Iwasa on the Charlo-Hogan card in Brooklyn.

“I always say in boxing the first round is the most dangerous round in boxing,” said Sean Gibbons, president of MP Promotions.

“Not much you can do when you get caught with that shot. And in the first round a really first clean shot to the body could drop any fighter. All we can hope is to get a rematch and move on from there.”

Tepora was working with new trainer Jorge Capetillo for the first time after questions about his discipline and focus arose earlier this year, when he missed weight by nearly six pounds for his fight against Hugo Ruiz on the Pacquiao-Broner card in January.

Escandon, 35, had been inactive for about 15 months. His previous biggest win came in 2014, when he defeated Tison Cave to win an interim belt at 122 pounds.