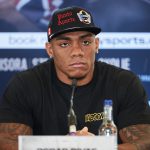 “I’m looking forward to the fight, let’s see what happens on Saturday.”

It was the usual pre-fight patter from Oscar Rivas and his team on Thursday as they came face-to-face with Dillian Whyte and his team at the final press conference ahead of their heavyweight clash at the )2 arena in London.

Rivas had been in the frame to face Anthony Joshua before the Brit was toppled in Madison Square Garden by Andy Ruiz.

While Whyte has been waiting for a title shot for some 600 days, Rivas said he was just waiting for an opportunity to crack the top tier of heavyweights.

Promoter Yvon Michel, in tow with the Canada-based Colombian, said that Rivas’ trainer Marc Ramsay is the best his country has produced and Whyte’s promoter Eddie Hearn admitted to being partially unnerved at how confident the visitors were. Ramsay said his man was injury-free and would have no excuses.

“It’s a game of opportunity and when Yvon first said [Eddie Hearn] called asking for Rivas I didn’t even want to know who the opponent was, I knew it was the chance we wanted,” Ramsay said.

Rivas has spent time in Colombia preparing, two weeks in Montreal and then 21 days in Europe acclimatizing and getting used to the time difference.

“We are ready for a massive performance on Saturday,” said Ramsay.

“We never tried to tell Rivas it was a Walt Disney fight. We have a lot of respect for Whyte, he’s a tough guy, even when he’s hurt he stays composed and deals with it and he’s able to win fights. But we’ve been waiting a long time and this is our opportunity.” The post Oscar Rivas: ‘We know Dillian Whyte is a strong fighter and a good puncher’ appeared first on The Ring.

4 thoughts on “Oscar Rivas: ‘We know Dillian Whyte is a strong fighter and a good puncher’”