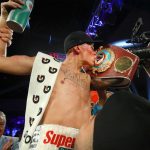 Sanchez was taking a significant step-up in opposition against Valdez. The 24-year-old Sanchez had only fought past the eighth round once, a career-best decision victory over former prospect Jean Carlos Rivera on October 31.

From the opening bell, and throughout most of the fight, Valdez landed several left hooks to the head of Sanchez. Whether it was a counter or lead left hook, Sanchez took repeated blows to the head, bruising the right side of his face.

Seconds into the fifth round, a lead left hook to the head dropped Sanchez to the canvas. Sanchez was not visibly hurt, continuing to fight on.

Sanchez had his best round during the seventh, where he closed the distance and landed several right hands to the head. The rally was short-lived as Valdez again put Sanchez on the defensive by round nine.

Valdez hurt Sanchez midway through the 12th round, connecting with a straight right hand to the chin. Valdez attempted to follow up, but Sanchez was able to grab onto Valdez and make it to the final bell.

There has been talk of Valdez likely moving up to 130 pounds, but he is hoping he can land one more big featherweight fight against any of the other world titleholders.

“I hope (to fight at featherweight again,” said Valdez, who is managed by Frank Espinoza. “I also have to listen to my body. We’re going to see what’s best. Sometimes I get tired in there, and I’m not sure if it’s because of the weight loss. We’ll talk about (my next move) as a team and we will do what is best. I want to fight everybody at 126, 130. Let’s do it.”

Promoter Bob Arum is hoping a fight could be made with two-division titleholder Carl Frampton later this year.

Sanchez, who resides in Albuquerque, New Mexico, drops to 14-1, 7 KOs.

The 19-year-old Flores fought five weeks ago before a sold-out crowd in his hometown of Stockton, California, knocking out Brazil’s Eduardo Pereira in the third round.

Flores was effective from distance, despite giving up height and reach to Briceno. Flores was at his best when he initiated exchanges to the head, but also connected hooks to the body of Briceno.

The 24-year-old Briceno did have his moments during the fight, but Flores was the more-effective fighter during the second half of the fight.

“He was a great opponent,” said Flores, who is trained by his father, Gabriel, Sr. “A lot of respect to him. I wish I could’ve done a lot more. He was cautious. I think he saw my last fight, saw I was getting better, and he was cautious.”

“I am only 19, and I am only getting better. I’m staying busy and fighting better opponents. I would like to fight again in two-three months. Top Rank is developing me perfectly, and it’s about fighting all different types of fighters to get me ready for the championship level.”

Seals backed Brooker against the ropes where he landed an overhand right hand to the head, dropping Brooker to the canvas. Brooker laid precariously over the bottom ropes as referee Jay Nady stopped the bout at 2:00.

Seals (23-2, 17 KOs), who resides in Atlanta, has now won his last three bouts since his disqualification loss to journeyman Michael Gbenga on May 25 of last year.