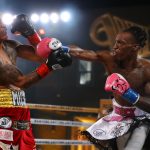 Foster improves to 18-2 (11 knockouts) and is now riding an eight-bout winning streak dating back to July 2016.

The fight headlined the debut card of “Ring City USA”, a new boxing broadcast and content platform, marking the first of several telecasts of live boxing on NBC Sports Network that will take place on Thursdays throughout 2021. A ring was set up in the parking lot outside the famed gym that is owned by Freddie Roach.

However, earlier in the day, no one was sure if the Foster-Roman fight would even take place.

Bobby Benton, who trains Foster, announced earlier Thursday on Twitter that he came across a pair of Cleto Reyes gloves that Roman was going to use for the fight that had padding removed. Benton did not only accuse Reyes outright of wrongdoing, but stated, “I will not let my fighters get cheated.”

The California Athletic Commission was made aware of the situation, confiscating the gloves and a back-up pair as well. Moments before the NBC Sports Network telecast began, a source close to the production told The Ring the fight was never going to be postponed or cancelled as the commission provided Roman with a similar pair of Cleto Reyes gloves.

After Foster was made aware of what happened, he made an ominous prediction: “He about to get this work.”

Midway during the opening round, Foster dropped Roman, who is ranked No. 9 by The Ring, with a right cross to the head. Roman barely beat the count, but was game after getting up from the canvas.

The taller Foster was the busier and more effective boxer from the outside. As Roman attempted to walk Foster down, Foster effectively countered to the head of Roman, connecting with right uppercuts or left hooks to the head.

Roman was beginning to let his hands go more during the second half of the fight. In round 9, Foster unleashed a left hook to the head, dropping Roman to the canvas. Roman beat the count, but was battered against the ropes, prompting referee Jack Reiss to stop the fight at 58 seconds. After the fight, Foster said he hopes he can contend against the elite fighters at 130 pounds.

“I’m glad I was able to showcase my skills on this big stage,” said Foster, who is promoted by Lou DiBella. “I would like to fight the winner of the (WBC world titleholder) Miguel Berchelt-Oscar Valdez fight.”

Roman, who resides in Ciudad Juarez, Mexico and challenged for a world title belt three times, drops to 62-14, 47 KOs.

Thursday marked the first fight for both fighters since the COVID-19 pandemic began. Ramirez, who had fought in over a year, was the busier and more-aggressive fighter during the first couple of rounds.

The southpaw Zepeda turned the tide in round 3, walking Ramirez down and connecting with counter hooks and crosses to the head. Ramirez’s punch output dropped significantly as he absorbed punishment from Zepeda.

Throughout most of round 5, Zepeda stunned Ramirez several times with a barrage of combinations to the head. Towards the end of the round, Zepeda backed Ramirez in a corner, raining down several punches to the head and body. Ramirez looked worse for wear, prompting his corner to throw in the towel, which referee Ray Corona acknowledged at 2:43.

In a swing bout, junior lightweight Eduardo Hernandez battered Eduardo Garza (15-3-1, 8 KOs) of Mission, Texas before ending matters with a left hook to the stomach at 2:37 of round 3. The Mexico City resident improves to 30-1, 27 KOs.

The post O’Shaquie Foster stops Miguel Roman in round 9 in Ring City USA opener appeared first on The Ring.