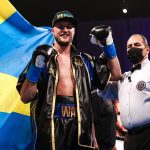 There are many benefits with fights taking place in empty arenas. You hear everything. The snap of leather each time a punch connects. The thud of a body shot. And the wind tunnel effect of a heavy mouth breather like Travis Kauffman.

After a slow start, Swedish southpaw Otto Wallin had Kauffman breathing heavier and heavier with each passing round. A mix of steady jabs, body shots and uppercuts certainly contributed to that.

Wallin (21-1, 14 knockouts, 1 no-contest) bounced back nicely from his first loss (to Tyson Fury back on Sept. 2019) with a fifth-round stoppage over the game, though outclassed Kauffman (32-4, 23 KOs, 1 no-contest) on Saturday night on PBC’s Showtime Championship Boxing telecast from the Mohegan Sun Arena fight sphere in Uncasville, Connecticut.

As a great tribute, Kauffman’s trunks and walk-in jacket were adorned with images of his former trainer, the respected Naazim Richardson, who passed away last month after a long illness.

By the fifth round, punch stat numbers bore out what everyone was witnessing: Wallin had connected on 52 of 169 jabs (31%) to Kauffman’s meager 5 of 26 (19%) jab connects. It was a clear indication of Wallin’s activity and Kauffman’s lack of it.

Wallin began asserting himself more in the fifth. He cleaved Kauffman’s high guard again with the jab, and just slightly after the midway point of the fifth, Kauffman began favoring his left arm.

Referee Michael Ortega observed Kaufmann hurting and waved it over at 2:32 of the fifth.

A replay showed that with 1:27 left in the fifth, Kauffman seemingly hurt his left shoulder when he landed an awkward left on Wallin’s right shoulder. After Kauffman landed the punch, he turned and walked away, visibly hurt with his left arm hanging.

“I tore my left labrum getting ready for the [Luis] Ortiz fight,” Kauffman said. “Like a dummy I waited like five months to have surgery on it after the Ortiz fight. So, I started feeling better and was going to do a tune-up fight in March, but then COVID happened.

“This opportunity came up and I didn’t want to pass it up and I felt good. In the first round I hurt it. I felt it, but then it went away and I thought maybe it’s just my mind and it went away. Then in the fifth round I heard it and that was it. It was torn again.