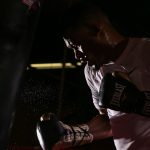 LAS VEGAS — You know the story by now, right?

Daniel Jacobs is known as “The Miracle Man” after overcoming a rare form of bone cancer that nearly ended his boxing career. Eight years have passed since surgery was performed to remove the cancerous tumor and now the 32-year-old is on the cusp of completing one of the most remarkable comeback stories in boxing when the IBF middleweight titleholder faces the sport’s biggest star in WBA (Super), WBC, The Ring and lineal middleweight champion Saul “Canelo” Alvarez on May 4 at T-Mobile Arena.

As the prevailing narrative goes: If Daniel Jacobs can knock out cancer, why should he worry about another man standing across the ring from him? If cancer couldn’t stop him from fighting, how can a human being prevent him from unifying the middleweight titles?

While it does make for an inspirational storyline that fans can connect to, it’s not necessarily as simple as that because Jacobs beating Canelo is nothing like overcoming the osteosarcoma that nearly left the Brooklyn fighter paralyzed. They are two totally different fights. But they do share a common thread in fortifying the mentality to overcome any challenge.

It simply isn’t the only challenge that Jacobs has faced in his career and isn’t necessarily the one that will help him the most when he squares off with Canelo.

Go back nearly nine years when Jacobs was known as “The Golden Child” of Golden Boy Promotions. Seemingly primed to be a breakout star, Jacobs was set to challenge Dmitry Pirog for the vacant WBO middleweight title. An undefeated fighter with a 20-0 record, Jacobs had the world in the palm of his hand. Oscar De La Hoya was prepared to push the then 23-year-old to the moon.

And it all came crashing down in just a matter of days.

“It was the biggest mental challenge that I ever had to face,” Jacobs (35-2, 29 KOs) recalled earlier this week about the fight that saw him shockingly stopped in the fifth round. But it wasn’t necessarily what Pirog brought to the ring that defeated Jacobs, it’s everything that surrounded him.

The week of the fight, Jacobs’ grandmother was hospitalized and she died due to complications from cancer. Jacobs was especially close to his grandmother, whom he refers to as “Lady Bird,” and often references Cordelia Jacobs as being the one who raised him when his mother was unable.

“The fight was on Saturday, but my grandmother was in the hospital on Tuesday and passed away on Wednesday,” Jacobs said. “We all surrounded her bed when she took her last breath and then I had to get on a plane the next morning to head to Las Vegas. I didn’t have enough time to grieve and prepare myself for battle.”

Jacobs thought about pulling out of the fight, but decided against it and perhaps allowed his emotions to get the best of him.

“I wanted to do it for her glory,” he said. “I had so many people telling me to not take the fight, but I wanted to do it in her honor. I made the judgment call even though it was the wrong call. I’m grateful for that because it made me who I am today.”

When Jacobs steps into the ring with Canelo on Saturday night, it will be the first time that he has fought in Las Vegas since that fateful night against Pirog. The sentimentality of returning to the place where he suffered his first defeat isn’t lost on Jacobs. The difference now is that Jacobs has learned how to check all of the emotions at the door before stepping into the ring.

“I think about her all the time, but I try not to think about her before a fight because it gets me emotional,” Jacobs told Sporting News. “I still have pain within from my past experiences, but I know how to turn them off and control it, so I can be the best version of me inside the ring. Boxing is mental, so I have to go in there with a clean slate with the only focus is me doing damage to my opponent.”

The stakes will be much higher for Jacobs when he faces Canelo. He was expected to defeat Pirog in 2010 and be recognized as Golden Boy Promotions’ next big thing. Against Canelo, he’ll enter the ring as a nearly 4-1 underdog and the man standing across the ring from him is Golden Boy’s current big thing and the biggest attraction in all of boxing.

MORE: Remember when Daniel Jacobs, not Canelo, was Golden Child of Golden Boy?​

But Jacobs is so much different today than he was a decade ago. His longtime manager Keith Connolly says he transformed from a “boy to a man” over the years and it’s a sentiment that Jacobs agrees with. He knows how emotions can have an effect on how a fighter performs. He won’t be entering the ring thinking about his late grandmother or beating cancer or the hostile environment he’ll be performing at where Canelo fans will be screaming at the top of their lungs on Cinco de Mayo weekend in support of their countryman.

None of that will matter once the bell rings.

“I know how to turn it off and on,” Jacobs said of what he learned after the loss to Pirog. “I have a job to do, and I do my job with mean intentions. When that first bell rings, I’m going to go out there and try to take his head off. It will be no buddy-buddy, no amigos, there’s none of that. I’m going in there and planning to take care of business. He’ll also have the crowd on his side. I want to go in there and maybe gain a few fans, but I want to go in and do damage in front of his fans. I want to embarrass him.”

Emotional detachment is necessary on this stage for a fighter like Jacobs. The kid from Brownsville, Brooklyn has endured a great deal in his life, but cannot allow it to dictate what he does against the red-headed Mexican who is looking to take Jacobs’ IBF title away from him. And although he smiles and has been respectful to Canelo and his team, none of that will matter once they are in the ring.

“I don’t take this lightly because somebody is trying to hurt me and prevent me from providing for my family,” Jacobs said, perhaps subconsciously avoiding using Canelo’s name as a means to treat him like any other opponent. “I just want to conquer him. I want to prove to the world that I’m the best middleweight in the world and will be a Hall of Famer. I’m doing this for my glory.”

He can’t take his grandmother’s spirit into the ring with him.

He can’t carry the love of his family between those ropes.

And he damn sure can’t use his victory over cancer in this particular showdown because you know who doesn’t care about any of what Jacobs has gone through?

And no previous victory or loss will be the reason he pulls off the upset. But it is the lessons he learned about who he is and how he uses it to overcome the mountain that stands in between him in the glory. Nothing else will matter for those 36 minutes. Not even cancer.

And that might be the biggest advantage that Daniel Jacobs will have over Canelo Alvarez on May 4. The post Overcoming cancer won’t help Daniel Jacobs beat Canelo, but this will appeared first on The Ring.