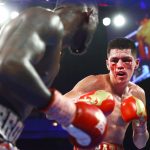 After scoring a resounding eighth-round knockout of Jeison Rosario in September to unify three belts and win the vacant Ring Magazine championship at 154 pounds, Jermell Charlo is only one belt away from becoming the undisputed junior middleweight world champion.

But Patrick Teixeira says Charlo will have to take the WBO junior middleweight title away from him if he wants to get all the glory.

“I would love to fight Jermell Charlo for all the belts,” he stated through an interpreter to The Ring. “I want the big fights and I want the belts.”

Teixeira previously called out three-division champion Terence Crawford for a showdown in June. While the 29-year-old is still interested in a fight with the pound-for-pound contender, he asserted that he had more to gain by fighting Charlo.

“I would choose the Charlo fight over Crawford right now because he has all the belts.

“Whoever wins that fight will be seen as the best in the junior middleweight division.”

If Teixeira were to defeat Charlo, he would become the first undisputed world champion from Brazil since Éder Jofre when the International Boxing Hall of Famer destroyed Katsutoshi Aoki in three rounds on April 4, 1963, in Japan.

However, that fight will have to wait for the time being.

Teixeira will defend his WBO title for the first time against mandatory challenger Brian Castaño on February 6, 2021, at the Fantasy Springs Resort Casino in Indio, California.

Golden Boy Promotions submitted a winning bid of $427,000 on Thursday afternoon during a Zoom conference call, handily defeating the $225,100 offer from TGB Promotions — which represents Castaño.

Teixeira (31-1, 22 knockouts), who has won five fights in a row since getting stopped by Curtis Stevens in a brief middleweight stint, was very happy to hear his promoter secured the purse bid victory.

“I’m very pleased with the work that Golden Boy has done,” Teixeira said. “It was a great job and a great effort to win this purse bid.

“And above all, it gives me an even greater desire to keep training.”

The unbeaten Castaño, like his future adversary, has not stepped into the ring since November of 2019 when he scored a fifth-round stoppage of Nigeria’s Wale Omotoso when the latter suffered an injury to his left shoulder.

Teixeira, who has been training since the coronavirus pandemic first shut down sports throughout much of the world, added that inactivity would not be a factor — at least for his performance.

“Since the [shutdown], I have continued to train, spar, and improve on my skills,” he revealed. “So I don’t feel that inactivity will be an issue for me this fight.”

Regardless of Castaño’s preparation, Teixeira expects him to be one of his most formidable opponents.

“He’s an excellent pressure fighter,” he admitted. “And I’m a great boxer, so it represents a challenge for the both of us.

“It forces us to work harder, to get better, and to keep growing in order to win this fight.”

Castaño (16-0-1, 12 KOs), 31, of Buenos Aires, Argentina, fought previously for a secondary belt but came out on the raw end of a controversial draw against titlist Erislandy Lara.

Teixeira provided The Ring with a glimpse of his upcoming game plan.

“The principle strategy is to fight smart from a distance,” he said. “Now, I can go in there and exchange with him, but the way to win is to be smart, and that’s what I’m going to do.”

The post Patrick Teixeira has eye on Jermell Charlo for undisputed junior middleweight championship appeared first on The Ring.