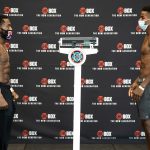 Charles Conwell had to wait six months for his canceled ShoBox main event to be rescheduled, but now he’ll only have to wait one more day.

“I know that I’m facing an undefeated, 12-0 fighter. He fought in the bubble, I know that. He’s a slim, tall type of guy who has length, and he’s athletic,” said Conwell of Toussaint, a native of Haiti who now lives on Long Island, New York. “I’ve just seen one of his fights. He has a little awkwardness and he throws some loopy shots that I need to be aware of.”

“Conwell is a great fighter but I’m a very strong fighter as well, so I’m not going to be frustrated by anything he does,” said Toussaint, who sparred with Sergiy Derevyanchenko in the lead up to his fight last month with Jermall Charlo. “I’m going to stay relaxed, box and let everything come together because like I said, this is not my first time getting in the ring.”

The fight headlines a special Wednesday night ShoBox card, the first since March, at the Mohegan Sun Arena in Uncasville, Conn. Conwell had been scheduled to headline a ShoBox card on April 10 before the Covid-19 pandemic put the sport on hold for several months. “All I know is that Nicklaus Flaz better be ready because I had a super hard training camp and we’ve been working hard,” said Bocachica, 21, of Detroit. “I want to put on a great show for something that I’ve been training so hard for. I know Puerto Rico is going to be watching this one, and I know all of his fans are going to be mine after this fight.”