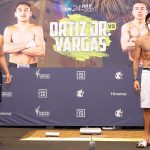 All fighters made weight on Thursday ahead of Golden Boy Promotions’ first show back since the COVID-19 pandemic began.

Vergil Ortiz Jr. weighed in at 147 pounds even for his 12-round main event fight, while Samuel Vargas was slightly lighter at 146.6. Ortiz (15-0, 15 knockouts) last fought in December, knocking out Brad Solomon in five rounds at Fantasy Springs Casino in Indio, Calif., the same site as the Vargas fight.

Vargas (31-5-2, 14 KOs) of Toronto has been in with a number of top welterweights, but has fallen short at the top level, losing to Danny Garcia, Errol Spence and Amir Khan. He last fought in June of 2019, outpointing Silverio Ortiz over eight rounds.

The Ortiz-Vargas fight was originally scheduled for March 28, but was scuttled due to the pandemic.

The co-feature was supposed to pit Hector Tanajara against Mercito Gesta, but that fight was canceled Thursday when Gesta withdrew with food poisoning. The card will stream live Friday on DAZN beginning at 8 p.m. E.T.