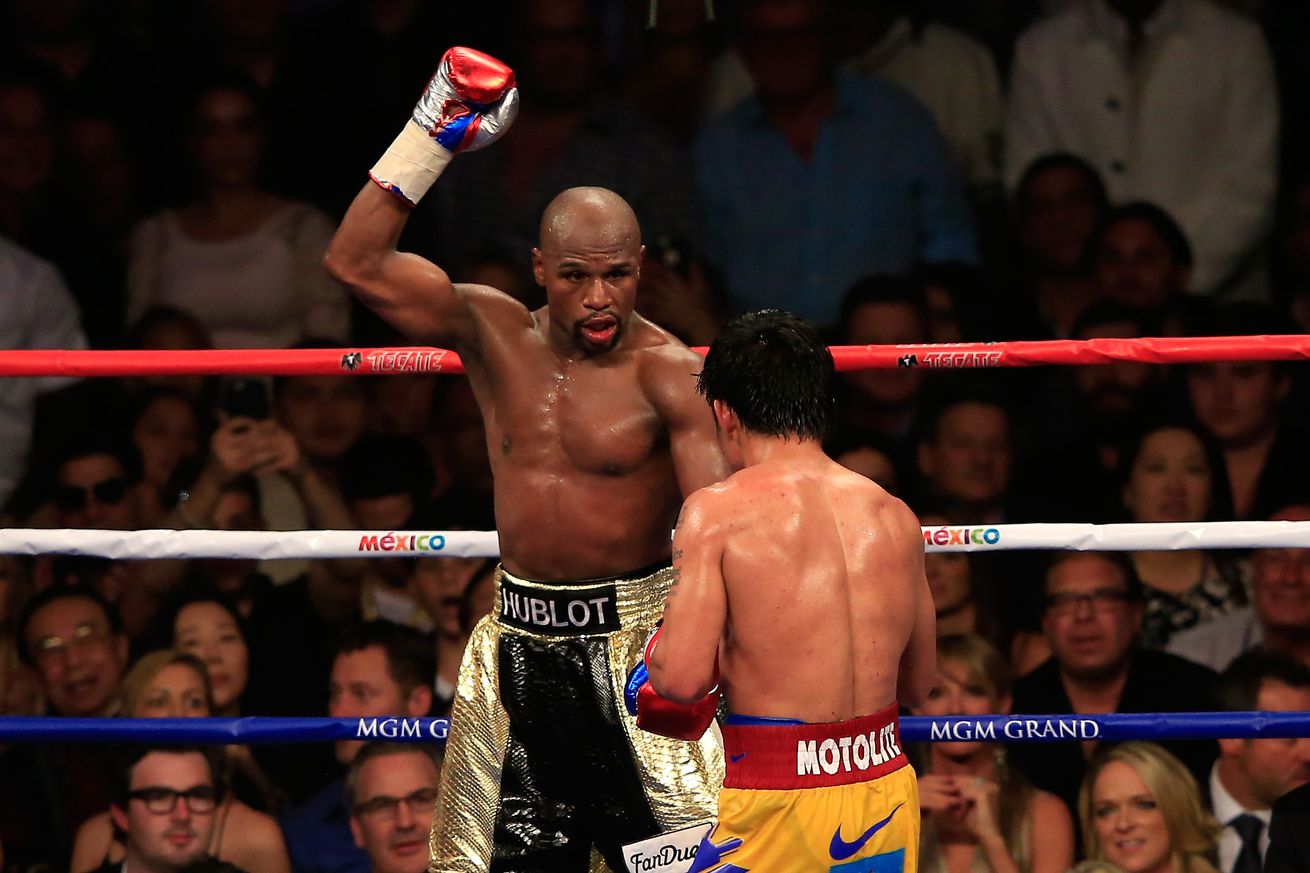 If the aging Mayweather comes back — which some expect is just a matter of time — what fighters stand the best chance at getting another crack at him?

The man is 42 years old and has done more than enough to bolster a pretty majestic legacy, which was set up by a work ethic, skill set, and ambition package that has some folks pondering whether, indeed, he could be the Greatest of All-Time.

We will leave that discussion to another time, place, and other persons, but Floyd Mayweather is still relevant, even though he hasn’t fought a true pugilism professional since Sept. 2015.

Mayweather is older, but that hasn’t lessened his name being brought up by people who want to fight him, and promoters who’d like to help facilitate that faceoff.

A few days ago it was Oscar De La Hoya talking about the oodles of money that a Floyd versus Canelo Alvarez rematch would do. Yesterday, McGregor weighed in.

Talk of rematches is in the air. Manny Pacquiao would dig another crack at Floyd, this time without a broken wing, and Conor McGregor hasn’t and will not attract the kind of purse versus anyone else that a Mayweather rematch could summon.

Let’s look at potential rematches, shall we, and rank them from least to most likely to occur.

Maidana walked away from the sport and enjoyed time puffing stogies and enjoying not having to put the brakes on at the dinner table. But no buzz beats imposing your will on another man and then having the crowd of 15,000 chant your name in appreciation. Maidana has started training, trimming down from the 200-plus pound mark, since announcing last month he’d be coming back after last fighting in Sept. 2014, against, you guessed it, Floyd Mayweather. Maidana vs Floyd would be a re-rematch, but very likely won’t occur, because Floyd handled him with ease in their sequel to a clash four months prior. He has a name, and, we suppose, could serve as a rust-shedder foe if Floyd wanted to do that — but why take the risk of doing that and maybe messing up a fight against someone who’d garner him that coveted Buffett-sized check? Chances of this happening: 5%

Stranger things have happened than seeing Floyd and Oscar re-acquainting themselves after last combating each other in 2007. That one — which grossed about $165 million — was close enough to have people convinced a rematch could be something other than a runaway Mayweather win. Judges saw an 8-4, 7-5, and 7-5 bout. And don’t think this rematch hasn’t been talked about and pondered every single year since they did it in 2007, and lately, too. That’s because every now and again, Oscar gets the itch to do it again, glove up, which he last did in Dec. 2008 against Manny Pacquaio. Chances of this happening: 8.5%

Mayweather put on a master class performance when he bettered young Canelo in 2013. No matter what CJ Ross said, the Mexican got handled and with zero doubt, too. But that was then, and this is now, and now, Canelo is the lead dog driver of the sport. He’s in his athletic prime and same goes for his sense of self. He’d love another chance, without being weight drained, at an older Mayweather, with the reflexes that have dimmed. Their tango was at the time the highest-grossing pay-per-view fight of all time, generating $150 million in revenue from 2.2 million pay-per-view buys, if you recall. Would Floyd take that risk? Rhetorical question. Not unless his grasp of calculus has changed — Mayweather knows what he’s lost and there is a reason he’s not put himself in with a young gun, a Spence or Thurman or what have you, because he wants to know he will get the W, not strongly suspect. And at this point, he cannot know that he’d beat Canelo at 154 pounds, which I think is the lowest the Mexican would fight. Chances of this happening: 10%

The Irishman is best shit talker in maybe all sports, and he managed to talk his way into a novelty rumble with Floyd in 2017, despite having a 0-0 pro boxing record. Their fight was close enough to have people able to be convinced that the UFCer could do better against a rustier Floyd: he’d grab a flashy name trainer, train at altitude, and Floyd would suggest that he’d diminished enough to give Conor a chance to beat him. Now, did Floyd, who made maybe $275 million for this spectacle, carry Conor the first time around in order to prop up the prospects of a rematch? I wouldn’t bet against it. Chances of this happening: 30%

Ya think the possibility of a rematch with Floyd had something to do with the Senator signing on with Al Haymon? Another rhetorical question. The 2015 super fight broke every financial boxing record, including doing 4.6 million PPV buys and more than $600 million in gross revenue across all revenue streams. So, my question would be when, not if, almost. But almost is with a capital A when we are where we are: Manny is 40, and he’s taking a large risk that his aura is too flat if he takes a summer fight, against a B-plus or higher grade foe, and loses or looks sub-optimal. My guess is he gets matched smartly, so the opening is there for Floyd to hit play, when he decides to un-unretire again. Chances of this happening: 75%

Those percentages, the reason they may not be higher is this: Floyd is now thinking far outside the box. His wheels are always turning, and if something pops up, a mixed rules match or whatever, he would latch on to that if the pot could be built up to the right size.

Readers, you weigh in. Will one of these sequels occur? Or will Floyd zag, and do something else entirely? Talk to me!