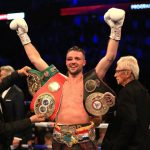 When Gervonta Davis scored that shuddering one-punch knockout of Leo Santa Cruz on Saturday, the Baltimore, Maryland native reaffirmed his status as one of the most dangerous and exciting fighters in the lower weight classes. He also extended his unbeaten record to 24-0 (23 knockouts), picked up the WBA junior lightweight title and staked his claim as an authentic pay-per-view draw.

But that’s not all.

As Davis carried out his post-fight media obligations, his potential as a pound-for-pound entrant was already being tossed around by fans and experts. Santa Cruz, a former four-weight world titleholder, had never been stopped in a 14-year professional career and Davis had switched him off for several frightening minutes. It was an electrifying finish, arguably a career-best win, and the event set the boxing world alight.

On Sunday, I voted for Davis as a pound-for-pound entrant but received very little support. In fact, only Diego Morilla agreed with me. Being out on my lonesome is not unusual in ratings panel debates, but I must acknowledge that the arguments coming my way on this one were solid. Davis was the naturally bigger man, he was a strong pre-fight favorite, and despite having contested world title bouts since 2017, this was his first BIG fight.

The more pressing issue, however, was that some panel members acknowledged that their inability to vote for Davis stemmed from the fact that neither Josh Taylor nor Jermell Charlo had merited inclusion when they were coming off impressive victories. This was not a first. When Charlo was put forth as a pound-for-pound option, following his eighth-round destruction of Jeison Rosario, I myself said that I couldn’t vote for him in good faith because Taylor had been ignored. In my view, the Scotsman had defeated better opposition than the Charlo twins and his resume was also superior to Artur Beterbiev, who, at that time, occupied the No. 9 spot on the list.

Taylor had been close to pound-for-pound inclusion but, ultimately, was found wanting. For me, that was a mistake and I made no secret of my frustration. The former amateur star had defeated Viktor Postol, Ryan Martin, Ivan Baranchyk and Regis Prograis in succession. Every one of those fighters held a place in The Ring 140-pound ratings, three of them were reigning or former world titleholders, and their combined records added up to 94-1. When the dust had settled, Taylor held Ring Magazine, WBA and IBF titles, as well as the prestigious Ali trophy awarded by the WBSS. He’d accomplished all of that inside 16 straight wins, which begs the question: What the hell else does Taylor have to do to get on the list?

Due in large part to previous ratings decisions being referenced too often, it was decided that the panel should have another shot at the bottom two places on the pound for pound list. It was unanimously agreed that No. 1 to No. 8 were solid and no changes were required. Ten of 12 panel members contributed and eight (Doug Fischer, Brian Harty, Martin Mulcahey, Daisuke Sugiura, Tris Dixon, Michael Montero, Diego and yours truly) selected Taylor for inclusion in the mythical ratings. Five panel members opted to have Taylor at No. 9 and four gave that position to his nearest pound-for-pound rival Gennadiy Golovkin (who had seven votes overall).

As a result, Taylor takes the No. 9 position and becomes the first Scotsman to adorn The Ring pound-for-pound ratings since they were first introduced in 1989. Golovkin now occupies the No. 10 spot, and Beterbiev drops from the list.