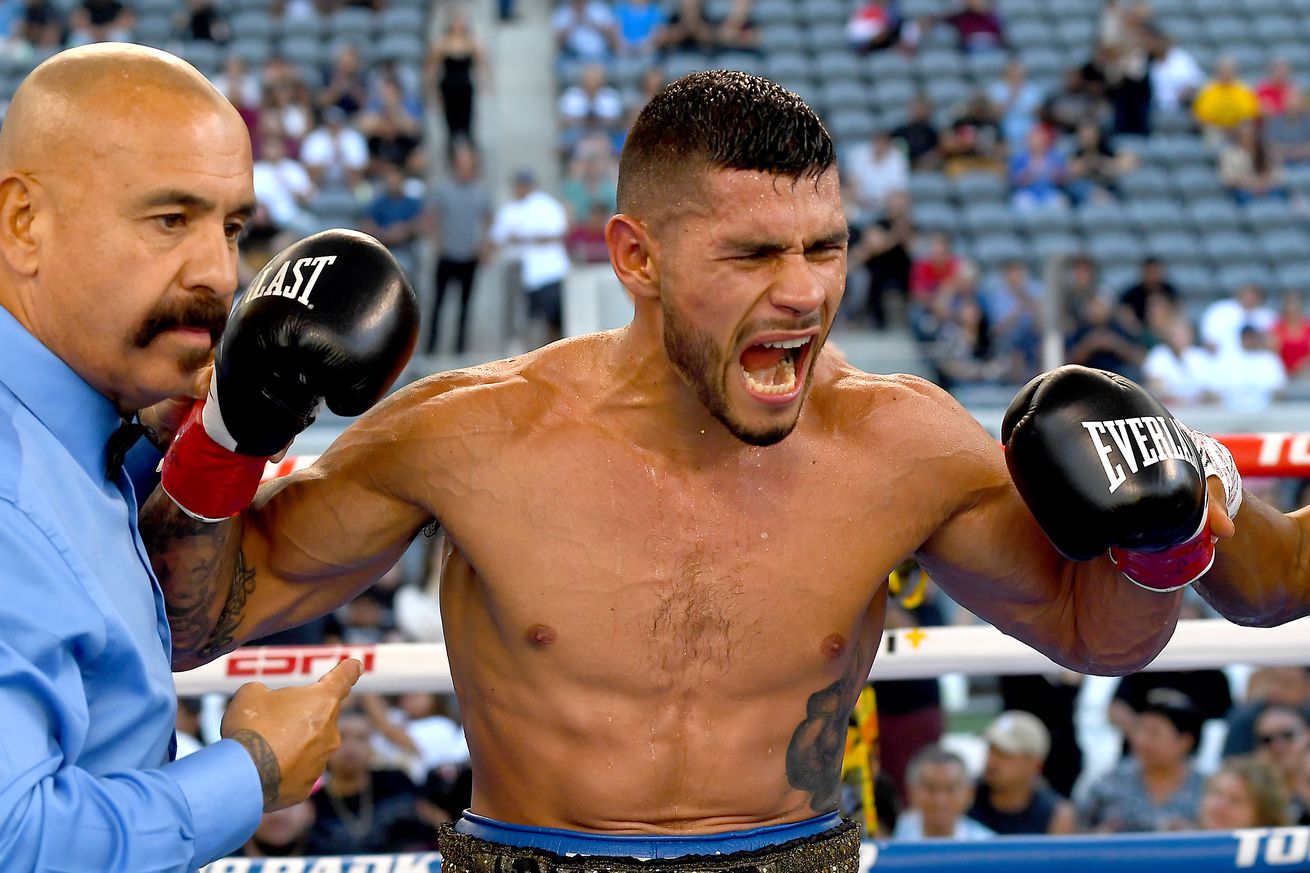 Saturday’s main event is the talk of the sport, of course, but the undercard has something to offer, too.

Saturday’s big fight between Vasiliy Lomachenko and Teofimo Lopez is one of the biggest bouts we’ll see in boxing for 2020, but there’s also a full undercard attached, featuring a solid co-feature, some good prospects, and the immortal Clay Collard, plus more.

There are seven undercard fights currently planned (you never know until the weigh-ins are done, now more than ever) in total, and five of of them are worth a few words at the very least. I started putting together the Lomachenko-Lopez main event preview, and began with the undercard. I realized the undercard section was getting a little long, and I didn’t want to fully bury it beneath the Loma-Lopez stuff, so I decided to throw this up as its own post.

The co-feature will be a meaningful 140-pound matchup between undefeated Arnold Barboza Jr and once-beaten Alex Saucedo. The 28-year-old Barboza (24-0, 10 KO) is a little long in the tooth at 28 to be seen as a prospect, but his best wins are still sort of prospect level. The 26-year-old Saucedo (30-1, 19 KO) probably could be unbeaten still, too, but he took a crack at the WBO title then held by Maurice Hooker in 2018, and lost a seventh round TKO.

This has some potential to be a really good fight. Barboza doesn’t have a flashy KO percentage, but he’s not feather-fisted, either, and he’s flashed some power in recent fights. He went a full 10 with Tony Luis on Aug. 29, but before that he’d stopped Mike Alvarado, Ricky Sismundo, and William Silva in a row. Not the highest caliber opposition, but he was doing as he should have against them. In reality his best win might still be his 2018 victory over Mike Reed, though.

Saucedo kinda snoozed us out in his last fight on June 30, winning a wide decision over Sonny Fredrickson. It was a fight he’d come into saying he was looking to be less reckless with his style, and he was, but he still got caught with shots. He’s never going to be a defensive ace, and it remains to be seen if he can — or should — stay less reckless when in against someone better than Fredrickson.

Perhaps the most exciting prospect on the show is super middleweight Edgar Berlanga, who is 14-0, all wins by stoppage, all in the first round. The 23-year-old New Yorker has still not heard the bell to send him to his corner for round two, and he turned pro in 2016. He’s starting to build some real buzz with Top Rank and ESPN, but it’s a plain fact that the competition needs to get better before we really have an idea of his ceiling and potential. Berlanga’s streak is impressive, yes, but we’ve seen a lot of knockout artists have long KO streaks and then flame out hard when the competition got better.

But Berlanga’s interesting because his power legitimately does not seem forced, and it doesn’t seem like he goes in there chasing knockouts. They’ve just happened. He hits real hard.

He’ll be facing Lanell Bellows (20-5-3, 13 KO), who is a legitimate step up for Berlanga. The 34-year-old Bellows wasn’t a big prospect and never became a contender, but has hung around as a pro, and the key selling point to this fight is that Bellows has never been stopped, and has gone a 10-round distance multiple times (this fight is set for eight). It’s worth noting that he has been dropped, and in recent fights, including his last one against Malcolm Jones. But he’s been a tough dude over his career. Berlanga still has some rawness to his game for sure, and Bellows is the right type of opponent for him at the moment.

22-year-old junior welterweight prospect Josue Vargas (17-1, 9 KO) will also be in action, taking on Kendo Castaneda (17-2, 8 KO) in a 10-round fight. Vargas does have a loss, but it came via disqualification back in 2016, so he’s never really been beaten.

We’ve seen Vargas on Top Rank undercards since 2018, and he’s looked good against the level of competition he’s faced. The 26-year-old Castaneda picked up a small amount of buzz from RJJ Boxing cards on UFC Fight Pass the last couple of years, and in 2020 has taken his cracks at bigger fights. In February, he lost a decision to Yomar Alamo. In July, he came in and lost a decision to Jose Zepeda, but he did nick some rounds from Zepeda, who now is a clear top four junior welterweight.

Castaneda has nothing real special to his game, but he’s a solid fighter, and again, this is worthwhile matchmaking from Top Rank. If Vargas is what he’s supposed to be, he should win pretty handily, but if he’s not, Castaneda is a decent enough fighter to expose flaws.

Cult favorite Clay Collard (9-2-3, 4 KO) will look to continue the minor magic he’s experienced in 2020. Collard, a former UFC fighter who also started doing pro boxing in 2017 with no significant hope of every standing out (he started his career 1-1-3), has gone 5-0 this year, a remarkable feat considering the sport was shut down for three months, and two of those wins were legitimate upsets and impressive stuff.

In January, he went to Cincinnati and won a six-round decision over Quashawn Toler in a welterweight fight. Toler was unbeaten but also really untested and not a real prospect or anything, but in February, Collard hopped up to middleweight for a PBC date against Raymond Guajardo, who is considered a real prospect. Collard and Guajardo got into a firefight, and Collard stopped the 19-year-old in the second round.

It was a fun night, but you could have figured it to be a bit of a fluke. Instead, when boxing got back in June, he got a Top Rank spot against another hyped teenage prospect, David Kaminsky. Collard battered Kaminsky over six rounds, and despite judge Patrica Morse Jarman ridiculously giving Kaminsky four of six rounds, Collard was a clear winner to basically everyone else on the planet.

The win over Kaminsky started the buzz on Collard for real, as it came at a time when Top Rank shows were all boxing fans had, and a lot of the small audience tuning in also remembered him upsetting Guajardo four months prior. It helps that Collard is likable, humble, hard-working, and has a real blue collar, everyman sort of appeal. Collard is not a textbook “good boxer” in basically any way, but he’s tough as nails, fearless, and fights like he’s got nothing to lose.

His last two wins, over LT Nelson and Maurice Williams, were fights where Top Rank and ESPN were taking advantage of Collard’s sudden popularity with diehards, fights where Collard was matched to win, and he did.

On Saturday, he faces 26-year-old Quincy LaVallais (9-0-1, 5 KO), which will be a rematch; the two met in June 2019 in New Orleans, going to a split draw over six rounds, with Collard winning one card (59-55), LaVallais winning another (58-56), and the third coming back even. LaVallais is otherwise unbeaten, but also has fought a bunch of guys who have done nothing and aren’t any good. This is a relatively enormous opportunity for LaVallais on a big stage (he’s never been on one) against a guy who has picked up a fan base, albeit a small one. It’s also a chance for Collard to keep things rolling.

We’ll also have an eight-round featherweight fight between Enrique Vivas (19-1, 10 KO) and John Vincent Moralde (23-3, 13 KO). This isn’t any huge fight, neither of these guys are seen as prospects or contenders, but it’s good enough to be worth a little look, anyway.

Both fighters are 26 years old, Vivas originally from Mexico, now living in California, and Moralde a young veteran from the Philippines. You may have seen Moralde, but if you did it was probably in defeat against Toka Kahn Clary, Jamel Herring, or Xavier Martinez, one per year from 2017-19, and Vivas will be looking to hand him his 2020 loss.

Vivas’ only defeat came last year, when he was shut down and shut out over 10 rounds by Ruben Villa in a ShoBox bout. But he’s bounced back from that, too, and on July 2, scored an off-TV win over previously unbeaten Carlos Jackson on a Top Rank card. Jackson came in with a pretty nothing record himself, but it was a good enough win that Top Rank are taking another look at Vivas.

Bad Left Hook will have live coverage for the full Lomachenko-Lopez card on Saturday, Oct. 17, starting at 7:30 pm ET.