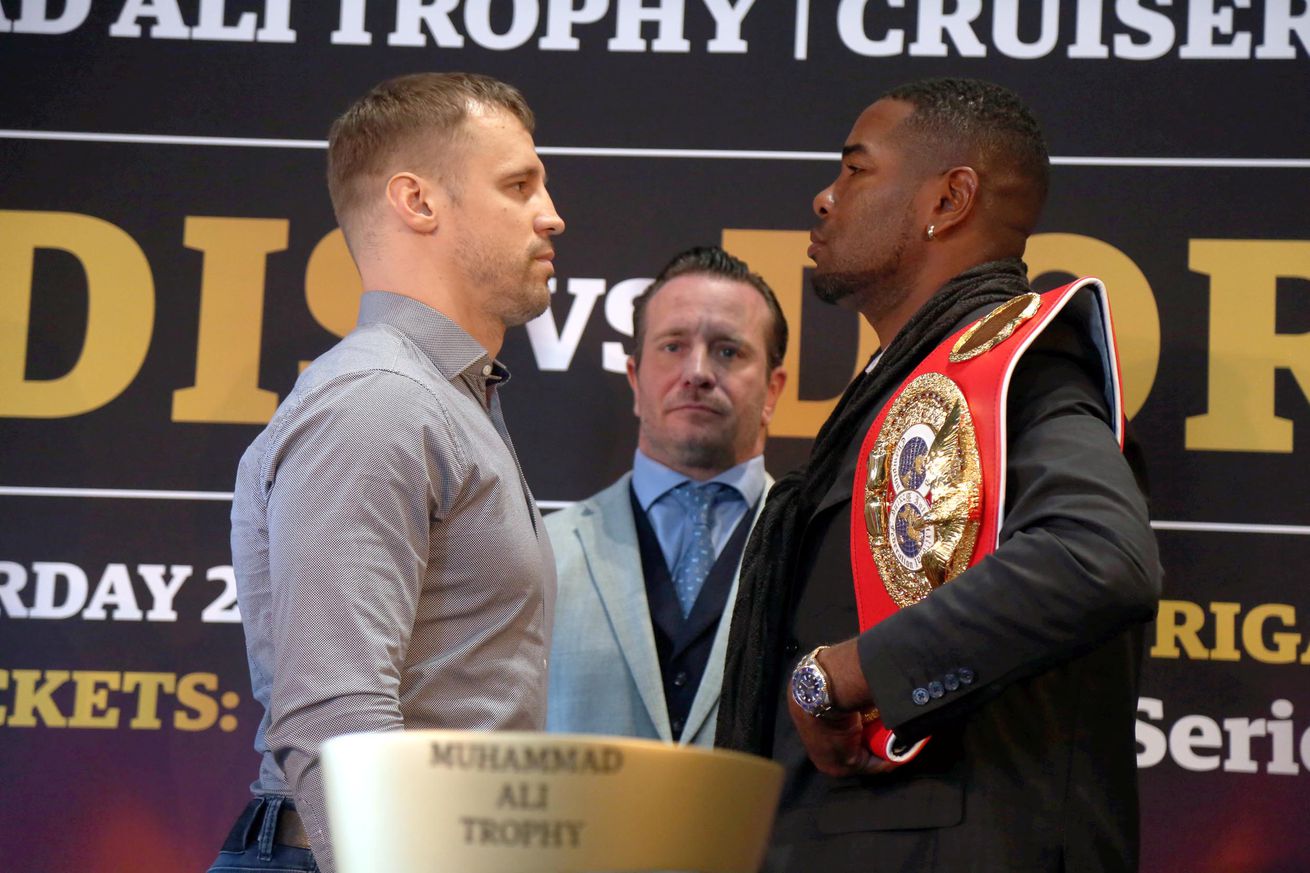 It’s been a long time coming, but finally on Saturday from Munich, Germany, Mairis Briedis and Yuniel Dorticos will square off to decide the winner of the 2018-19 World Boxing Super Series cruiserweight tournament, and also to answer the question of who the best cruiserweight in boxing is today.

It was almost two full years ago that this tournament began, with Dorticos winning a decision over Mateusz Masternak in Orlando, Fla., on Oct. 20, 2018, and Briedis kicking off his tournament in questionable fashion on Nov. 10, 2018, taking a disputed decision win over Noel Mikaelian in Chicago.

Briedis, now 35, had made it to the semifinals of the first WBSS cruiserweight tournament, where he was then beaten in a really competitive fight by Oleksandr Usyk, who would go on to rout Murat Gassiev in the tournament final.

Briedis gave Usyk by far the toughest fight he’s had to date as a professional. It was determination and grit more than skill that kept him in that fight, which I scored even and the judges had 114-114, 115-113, and 115-113 for the Ukrainian star. Briedis was fighting on his home turf in Riga, Latvia, and he gave a performance to be highly proud of indeed.

How to Watch Briedis vs Dorticos

But since then, Briedis just hasn’t looked like the same guy. He was dull while cruising through a 10-round tune-up against Brandon Deslaurier in July 2018, and then had a lot of trouble with Mikaelian a couple of months later. That fight could easily have been scored in the underdog Mikaelian’s favor, but the judges gave it to Briedis. BLH’s Wil Esco scored the fight 115-111 for Mikaelian, with Wil saying that once again, Briedis “didn’t look like himself,” and was either “uninspired” or “largely befuddled by Mikaelian’s awkward boxing style.”

Wil was also on the BLH call in June 2019 when Briedis faced Krzysztof Glowacki in the WBSS semifinal. That fight was three rounds of insanity before a TKO ruling in Briedis’ favor. Instead of trying to write it all up again, here’s what Wil wrote in the recap:

“In the second round there was a sequence when Glowacki clearly punched Briedis behind the head, with Briedis retaliating with a deliberate elbow to Glowacki’s head. Glowacki appeared to want to play up the blow from Briedis a bit (although it was brutal), taking a tumble to the canvas and laying face down for good measure. He ultimately sort of forced the referee to deduct a point from Briedis for the elbow. But this was only where things started going haywire.

“When the referee started the action up again, Briedis immediately hit Glowacki with a right hook that put him down hard. Glowacki got up, and the bell rang ending the round, except neither fighter gave two fucks the round was over! They continued to slug it out well past the bell and referee Robert Byrd never intervened because he apparently couldn’t hear the bell ringing. I honestly don’t know how he didn’t hear the bell, I could hear it ringing clearly and continuously for what felt like a full 15 seconds. And as the fighters threw down well past the bell, Briedis would land another clean shot that would put Glowacki down again.

“Glowacki’s corner was pissed, to say the least, because the knockdown was so long after the bell had rung, with a couple of their cornerman even jumping onto the ring to protest. But because the referee never stopped the action, he ruled the second knockdown as legitimate anyway. There would be serious confusion on what the fuck was actually going on and if the fight would have to be stopped, but they ultimately just decided to continue on as if nothing happened. Glowacki was still badly hurt, though, so to start the third round Briedis came right out and clipped Glowacki again, putting him down for good. The official stoppage came at 0:27 of round three.”

Here are the highlights, too:

The TL;DR version is this: things got fuckin’ chaotic in Latvia that day, and in the end Briedis (26-1, 19 KO) would vacate the WBO belt he won in the fight because it was all just such a shitshow. (That title is tentatively set to be decided between Glowacki and Lawrence Okolie in December, for what it’s worth.)

As for the 34-year-old Dorticos, Cuba’s “KO Doctor” also took part in the first WBSS cruiserweight tournament, knocking out Dmitry Kudryashov in the first round, and then getting stopped in a terrific battle with Murat Gassiev in the semifinal.

His win over Masternak in the opening round of the second season tournament was a solid one, and he followed that up by absolutely flattening Andrew Tabiti in the 10th round of a semifinal fight in June 2019, on the Briedis-Glowacki card.

Dorticos (24-1, 22 KO) has real power and is absolutely not afraid of a fight, he’ll mix it up in there. The Cuban stereotype is one of skilled fighters who are often risk-averse, but Dorticos will take chances in the ring for sure.

On paper, this is a great fight, not just because it’s No. 1 vs No. 2 by basically everyone’s rankings (other than BoxRec, who have Ilunga Makabu and Glowacki ahead of Dorticos, which isn’t even that hard to defend, to be fair), but because stylistically this could be a blast. Briedis at his best is a tough, rugged guy, but we haven’t really seen him at his best in recent outings, and the Glowacki thing was so damn bizarre that it’s hard to measure anything from that fight. Dorticos can be a lethal puncher. Both guys will mix it up and come to fight.

Dorticos will be defending the IBF title and the vacant Ring Magazine championship will also be at stake. This is a fight that should have happened in late 2019 or early 2020, but for various reasons didn’t, and then was repeatedly postponed by the COVID lockdown in the spring.

But finally, on Saturday, serious boxing fans get one of the best fights possible in the sport. This could also be the end of the World Boxing Super Series in general, as the organizers had some money issues in season two, though in the end things wound up working out.

If Briedis-Dorticos is even, like, 70% as good as the other season two finals — a fantastic Josh Taylor-Regis Prograis fight and 2019’s Fight of the Year between Naoya Inoue and Nonito Donaire — it should be worth the wait. If this is goodbye to the WBSS, that would be too bad, but if nothing else we got a lot of good fights and some really good matchups that might not have happened otherwise between 2017 and Saturday.