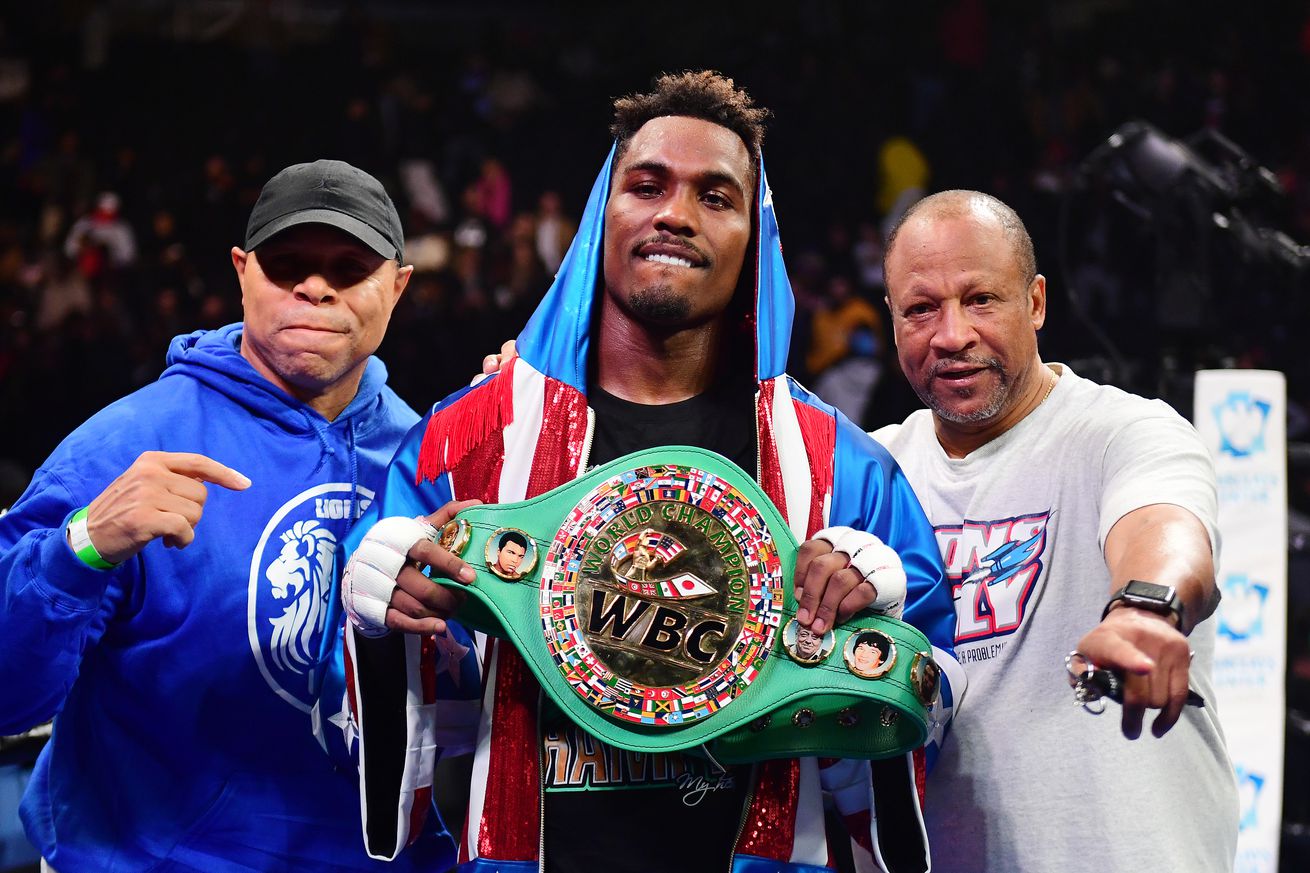 Will Jermall Charlo prove his quality, or will Sergiy Derevyanchenko finally get over the championship hump?

Saturday night on Showtime PPV, the Charlo twins both return to action in a big card from the Mohegan Sun in Connecticut, and for now, let’s focus on Jermall Charlo’s WBC middleweight title defense against Sergiy Derevyanchenko, plus the undercard bouts that will be on their half of the bill.

The Charlo-Derevyanchenko fight is a really good one. If you want to go by independent rankings, BLH has Derevyanchenko No. 4 in the division and Charlo No. 5, and here’s where they stand with others:

Bottom line is this is a meeting between two guys in the top five, or top six if you’re BoxRec and Chris Eubank Jr is the fourth-best middleweight in the world. (Listen, I deeply appreciate BoxRec and all the folks who put time and effort in there, but that is out of step with anyone else, basically. It happens, what with the computers and all.) It’s the sort of fight we wish we’d see more of in the sport all the time.

It’s also a pretty simple story, in all honesty, and a fight that’s easy to break down into a narrative. Jermall Charlo and Sergiy Derevyanchenko are both seeking a career-best win, but from different angles. For Charlo, it’s about shutting down his skeptics once and for all. For Derevyanchenko, it’s a third chance to get over that championship hump.

The 30-year-old Charlo (30-0, 22 KO) has never lacked for confidence when there’s a microphone (or a smartphone) near him, same for his brother Jermell. Their personalities have been divisive, to say the least, among boxing fans over the years. Some see them as boisterous fighters with the skills to back it up. Others see them as big talkers who haven’t quite earned the right to bark as they do.

Personally, I don’t much care either way. Yeah, they talk a lot. Yeah, I have my quibbles with the record of Jermall. But I also do think both of them are very talented fighters.

And again, Jermall can shut down the doubts on Saturday. The people who aren’t outright “haters” can be swayed if you truly back it up come fight nights, too, and taking a challenge like Derevyanchenko — who isn’t a star but everyone agrees is a serious fighter and contender — is the chance to do just that.

After winning a title at 154, Jermall made the move up to middlewight in 2017. In his first bout, he routed a hobbled Jorge Sebastian Heiland in four, and followed that with a nasty knockout of Hugo Centeno in April 2018. He capped 2018 with a competitive decision win over Matt Korobov, a fight that could rather easily have been scored even, and that some (even if a minority) felt Korobov did enough to win.

The Korobov fight is a tricky one, though, and not just in that Korobov proved tricky for Charlo on the night. Charlo was originally supposed to face Willie Monroe Jr, and Korobov was bumped to the main event on very short notice. While both Monroe and Korobov are southpaws, meaning that wasn’t the issue on short notice, they otherwise have few similarities as far as style. Monroe is slick and a mover, while the Russian-born Korobov is a more technically sound fighter. Korobov had once been a top prospect, but it never really panned out. Against Charlo, he had probably the best fight of his pro career.

But slightly more nuanced and forgiving discussion aside, the fight left people with more questions about Charlo, and his 2019 wins over Brandon Adams and Dennis Hogan didn’t really provide many answers. Adams avoided confrontation for 36 minutes and Charlo won easily, while Hogan gave it a bit more of a go and was stopped in seven, having come up from 154 pounds.

While the Texan Charlo has had the PBC hype machine behind him for years, and has left questions even in victory, Ukraine’s Derevyanchenko (13-2, 10 KO) has earned his biggest respect in defeat, and has battled his way to relevance.

The 34-year-old “Technician” turned pro in 2014, having had a good but not otherworldly amateur career. He won bronze at the 2007 World Amateur Championships in Chicago (Korobov won gold, as a side note), and tried to get going relatively quickly as a professional, facing half-decent fighters early on in his career, guys like Alan Campa and Elvin Ayala, among others.

A 2016 stoppage of faded veteran Sam Soliman in Connecticut led to a 2017 win over Tureano Johnson, who remains a fringe contender in the division. Derevyanchenko dominated against Johnson, winning pretty much every round before a stoppage win 40 seconds into the 12th and final frame.

In 2018, Derevyanchenko got his first crack at a world title, when he was ordered to face Daniel Jacobs for the vacant IBF strap. It was an odd situation for everyone involved, as the two shared a trainer, Andre Rozier, at that time. Rozier trained and cornered Jacobs, with whom he had long been close, and Derevyanchenko worked with Gary Stark Sr.

Derevyanchenko went down in the opening round, but didn’t panic and kept himself in the fight, ultimately losing a split decision that really could have gone either way. After a rather lackluster performance in victory against Jack Culcay in Apr. 2019, Derevyanchenko got another call to once again fight for the vacant IBF title, this time against Gennadiy Golovkin.

In their Oct. 2019 bout, Derevyanchenko had Rozier in his corner this time, but once again went down in the first round — and once again stayed composed and got himself into the fight. He pushed Golovkin hard, and a lot of people thought he’d done enough. GGG scraped by with narrow unanimous decision scores.

Both of those fights led to a deeper fan appreciation for just how good Derevyanchenko is, and rightly so. You could have made a solid argument for him to have won both times.

But he’s not getting any younger, either, and Saturday’s third crack at a world title will be his third. He’s facing a younger man in Charlo, and one who has good athleticism, some explosive power, and good skills. A lot of guys have won world titles, some have won multiple world titles, without having to face anyone as good as Golovkin, Jacobs, or Charlo, and speaking frankly and accepting that boxing is the way it is, Derevyanchenko should honestly be worried about this going to the cards. He’s not the guy who’s supposed to be the star, just as he hasn’t been before.

Stylistically, it could be really compelling. Charlo is taller and longer, but does he have the ability and patience to hold Derevyanchenko at bay with the jab and work from there? And if/when Derevyanchenko forces a closer quarters fight, can Charlo handle someone as good and skilled on the inside as Derevyanchenko?

Again, bottom line, this is a really good matchup, and it’s a fight you want to see.

Two undercard fights will highlight this first half of Saturday’s PPV. In one, Brandon Figueroa will defend his WBA secondary “world” junior featherweight title against Damien Vazquez, a matchup that might look a lot better on paper than it does in the ring.

Figueroa and Vazquez, both 23, are the younger brothers of known action fighters. “Heartbreaker” Figueroa (20-0-1, 15 KO) is the younger brother of Omar Figueroa Jr, who held the WBC lightweight title in 2014 but always had trouble focusing on his boxing. An all-action warrior, Omar would leave the lightweight division in 2015, and didn’t do quite so well at higher weights. He only lost once, to Yordenis Ugas in July 2019, but he just never looked like the same guy fighting between 140 and 150.

While questions of dedication have dogged Omar for years, Brandon has never been rumored or reported to have the same issue. He is by all accounts a very committed young fighter, and he’s looked generally sharp against mostly overmatched opponents so far. He did have a tough outing last November, when he went to a draw with Julio Ceja, but Ceja badly blew weight and Figueroa probably shouldn’t have gone on with the fight in the first place. Ceja’s also a pretty good fighter, period.

Vazquez is the younger brother of the legendary Israel Vazquez, who won three world titles at 122 pounds and had many a legendary night in his incredible career, which ran from 1995-2010. Israel also happens to be the all-time favorite fighter of yours truly.

While Brandon may not be Omar in some encouraging ways, Damien just isn’t Israel, or at least hasn’t been to date. Damien got a rude awakening when he stepped up big in class against former bantamweight titlist Juan Carlos Payano in Mar. 2019, losing every round of their eight-round bout, and he went to a hugely disappointing six-round draw with club fighter Josue Morales in his next outing, five months later. He last fought on Feb. 29 in Mexico, stopping journeyman Alejandro Moreno in five rounds.

Vazquez is young enough that something may click for him and he might put it together, but the Payano fight in particular is troublesome. Payano’s a damn good fighter, mind you, but he just totally out-classed Vazquez, who looked like he had no idea what to do.

Figueroa’s a busy fighter, but his style may be more the speed of Vazquez, too; anyone who fights aggressively like Figueroa is vulnerable to return fire if the other guy can hang in there, and Vazquez will get the chance to show improvement and really break through himself. This could wind up a mismatch, yes, but it’s also a really big chance for Vazquez.

We’ll also see John Riel Casimero defend his WBO bantamweight title against Duke Micah. This isn’t the fight that Casimero, 31, was hoping to have at this point; he was scheduled to face Naoya Inoue in a three-belt unification, a fight that COVID scrapped along with so many others, and it couldn’t get worked out to be rescheduled for one reason or another.

Casimero (29-4, 20 KO) still badly wants that fight, and he might well get it if he wins here. The Filipino veteran has rather quietly been one of the more successful fighters in the entire sport over the last decade. He started the 2010s with back-to-back losses to Ramon Garcia Hirales and Moruti Mthalane in title bouts, but has gone on to claim gold at 108, 112, and now 118, following last November’s upset stoppage of Zolani Tete in Birmingham, England, where Casimero’s heavy hands were just too much for the South African.

Micah, a 29-year-old from Ghana nicknamed “The Baby Faced Terminator,” will be the underdog himself in this one, but he’s no scrub opponent, either. He represented his country at the 2012 Olympics in London, where he lost in the second round to Michael Conlan, who was a top amateur and is now a pro prospect of debatable quality and much hype.

He turned pro late in 2012 at home in Accra. In 2016, he started taking fights abroad in the United Kingdom, and by 2017 he’d made his way to the United States. He hasn’t faced true top-level opposition, certainly nobody on Casimero’s level, but despite a great win over Tete, Casimero is still fighting as a small man in the bantamweight division. He’s compact and powerful, but he’s going to be giving up a few inches of height to Micah, who knows how to box and may well look to use a sizable reach advantage to frustrate Casimero. It’s not like Casimero’s some flawless fighter, he lost to Jonas Sultan in 2017, and Sultan is firmly “OK.” There could be a bit more to this one than you might think right off the bat.