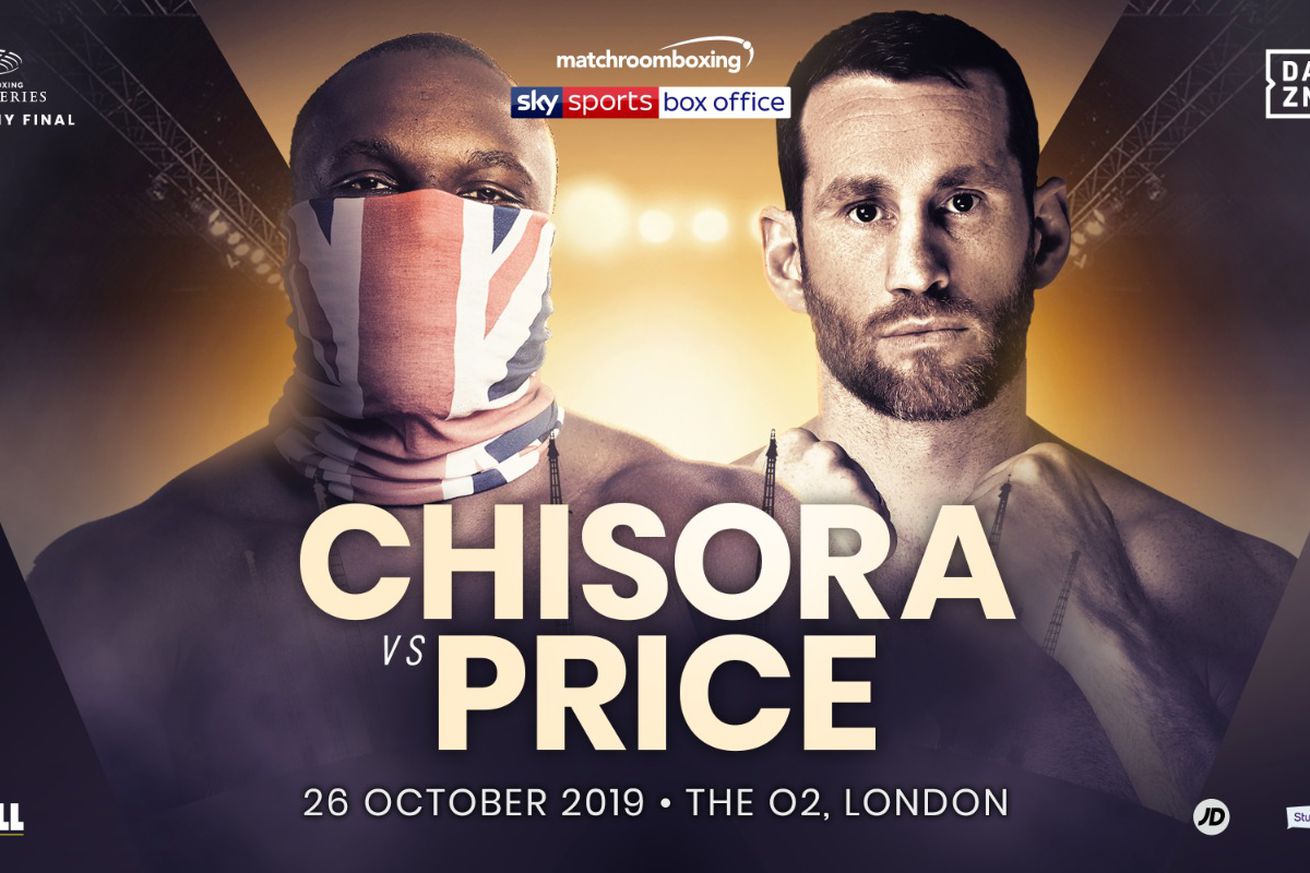 It’s a pay-per-view level undercard this Saturday in London.

This is one of those matchups where you don’t think it can possibly go a 12-round distance, so maybe it will, and if it does, it’s going to be pretty bad. But if it doesn’t, it could be explosive.

The 35-year-old Chisora has become a fan favorite in the United Kingdom over the years, something you may not have expected some years back. He won the British heavyweight title in 2010, blasting out Danny Williams in two, and added the Commonwealth title a few months later by stopping Sam Sexton.

Chisora was a bit exposed in his next outing, losing both of those titles to a young Tyson Fury by 12-round decision, and then he dropped a highly controversial decision to Robert Helenius in Dec. 2011 in Helsinki. The loss to Helenius didn’t wind up being a setback at all, though, as Chisora was called up to challenge Vitali Klitschko for the WBC title just two months later.

The Klitschko fight led to probably Chisora’s greatest fame, as he cast himself fully as the “heel” of the event, disrespecting Vitali and brother Wladimir both, before losing a wide decision in Munich. But while the fight wasn’t close, Chisora didn’t embarrass himself in the ring with one of the best heavyweights of the modern era. After the fight, however, he was involved in an infamous press conference confrontation with David Haye, setting up a grudge match between them in July 2012, where Haye smashed Chisora out in the fifth round, handing Chisora his fourth loss in five fights.

After five straight mid-tier wins in 2013-14, Chisora rematched Fury in November of that year. Fury stopped him after 10 rounds. In 2016, he lost to Kubrat Pulev after five straight low level wins. Dillian Whyte beat Chisora in a fantastic brawl in Dec. 2016, Agit Kabayel scored a majority decision win over him in 2017, and Whyte beat him in a rematch last December, knocking Chisora out in the 11th round of another competitive fight.

This year, Chisora (31-9, 22 KO) has beaten Senad Gashi, who refused to engage, and Artur Szpilka, who didn’t and got knocked out hard.

Turning pro in 2009, Price, now 36, had high hopes and high expectations. Basically, he was Anthony Joshua before there was an Anthony Joshua, seen as the United Kingdom’s great hope to win a world heavyweight title. In 2011-12, he trucked along as expected, stopping Tom Dallas, John McDermott, Sam Sexton, Audley Harrison, and Matt Skelton, none of them going past the fourth round. He’d won the British and Commonwealth titles, and was set up to face former world title challenger Tony Thompson in Feb. 2013.

Price was expected to win. He did not. Thompson stunned the prospect with a second round stoppage. Price and promoter Frank Moloney went right at the rematch a little over four months later, hoping to quickly erase the memory. Price started strong, but Thompson got him out again, this time in the fifth round.

For all intents and purposes, David Price never got back in the game. He stayed active, but lost in every attempt to step back up a little bit. He was stopped by Erkan Teper in 2015, though Teper failed a drug test. (The EBU, sanctioning the bout, did not overturn the result.) He was stopped in seven by Christian Hammer in 2017, and in 2018 he was stopped by both Alexander Povetkin and Sergey Kuzmin.

This year, though, there’s been a glimmer of hope for Price once again. After a March win over Kash Ali — a DQ due to Ali biting Price on the stomach after a tumble to the canvas — Price was matched against Dave Allen, a popular domestic fighter who seemed to be putting things together.

All of Price’s long-known flaws figured to lead him to another loss, but they just didn’t show up. Allen didn’t crack Price’s chin, and Price (25-6, 20 KO) didn’t gas. He dominated Allen, who quit after the 10th round. It was arguably the biggest win of David Price’s once-promising career.

On paper, this should be Chisora in a romp. If “War” Chisora comes out, he should get to Price pretty quickly. If Dereck is slightly more laid back, it’s unlikely he lays back as much as Allen did, which gave Price time to settle in and control the fight — Allen just didn’t let his hands go, and that’s not really a problem Chisora has often. Chisora should win, but with the way the heavyweight division goes, David Price is one win — this one — from maybe wriggling his way into a true top-level fight after all these years, and that gives this some intrigue.

Ricky Burns’ first chance at breaking through came in early 2006, facing Alex Arthur, current DAZN commentator, for the European, British, and Commonwealth super featherweight titles. Arthur took the victory that night. A year later, Burns lost a British title fight to Carl Johanneson, and it appeared Burns was just a decent domestic-level fighter, but he’s gone on to big things.

Now 36, Burns is a living legend of Scottish boxing, the first fighter in Scotland’s history to win world titles in three weight classes (130, 135, 140). He just passed 18 full years since his professional debut.

Burns (43-7-1, 16 KO) broke through in Sept. 2008, beating Osumanu Akaba for the Commonwealth 130-pound title. He went on a strong run, but still entered a 2010 world title fight with Roman “Rocky” Martinez as a clear underdog. But that night at Glasgow’s Kelvin Hall, Burns came off the canvas in round one to upset the odds and take the WBO title, making three defenses before moving up to 135.

At lightweight, Burns won the interim WBO title against Michael Katsidis, and was promoted to full titleholder status, winning defenses against Paulus Moses, Kevin Mitchell, and Jose Gonzalez. In 2013, he went to a disputed draw with Ray Beltran in a fight almost everyone believed Beltran should have won. 2014 saw Burns knocked off by rising star Terence “Bud” Crawford, followed by an upset loss to Dejan Zlaticanin that seemed to indicate Burns’ time as a top fighter was over, and a move to 140 and loss to Omar Figueroa Jr in 2015 seemed to confirm that.

Burns, though, would reset, and after a pair of tune-up wins, won a vacant WBA title at 140 against Michele Di Rocco in May 2016. He beat Kiryl Relikh five months later, but lost his belt to Julius Indongo in April 2017, and then move back down to lightweight and lost to Anthony Crolla. Again, it seemed he was done at the high level.

Then in Nov. 2018, Burns stopped Scott Cardle inside three rounds, once again proving he’s not done yet.

Selby, like Burns, stumbled before he broke through, losing his fifth pro fight back in 2009, dropping a four-round decision to Samir Mouneimne. Now, all things being fair, Mouneimne turned out to be an OK pro fighter, racking up an 18-2-1 record and fighting for both the British and Commonwealth featherweight titles.

In time, Selby lived up to his early billing, claiming the British and Commonwealth titles in 2011 with a stoppage win over Stephen Smith, and he added the European title to his collection in 2014 with a win over Rendall Munroe.

The following year, he received his first world title shot, outclassing Evgeny Gradovich to win the IBF featherweight title. His reign saw him make four successful defenses before an upset loss in 2018 to Josh Warrington at Elland Road in Leeds.

Selby felt it was time to move up in weight, but he skipped over 130 to go up to lightweight for a win in February over Omar Douglas, a fight that wound up being very competitive, opening up some worry about his ability to compete at the higher levels at 135 pounds.

The matchup here is a big one for both guys. Burns, the older man, is also the naturally bigger man, and looked good a year ago. Scott Cardle is a limited fighter and, well, it was a year ago, but Burns has seemed finished and gone on runs before. Selby is closer to his prime, but still has to prove himself at lightweight.

Being honest, there just isn’t much footage out there on Ngabu (20-0, 14 KO), who will be defending his European cruiserweight title. Ngabu is a 30-year-old from Belgium, and has fought his entire pro career in his home country. He claimed the vacant EBU title in 2017, stopping Tamas Lodi in the fourth round, and has defended twice, beating Geoffrey Battelo and Micki Nielsen.

His on-paper results say Ngabu is a legit European title sort of fighter, so we should find out if nothing else whether or not Okolie is at this level for real. The 2016 Olympian hasn’t been all roses as a professional, despite his 13-0 (10 KO) record. There’s still at times an obvious rawness to his game, and he’s not always the most exciting guy to watch. He and Isaac Chamberlain put on a dreadfully dull fight in Feb. 2018, and Okolie’s win over Matty Askin in Sept. 2018 was littered with Okolie fouls, for which he was docked three points.

But Okolie has looked a bit sharper this year, stopping all three of his opponents: the aforementioned Lodi, Wadi Camacho, and Mariano Gudino. None of them were a real threat, either, and had styles where Okolie could look more explosive than he did with Chamberlain or Askin last year.

So the jury is still out on Okolie. He’s won the British and Commonwealth titles, and the next level is European. He’s taking the step he needs to take, with the ultimate goal being world titles, probably by next year. He’s 26, so he’s right at the start of what should be his prime.