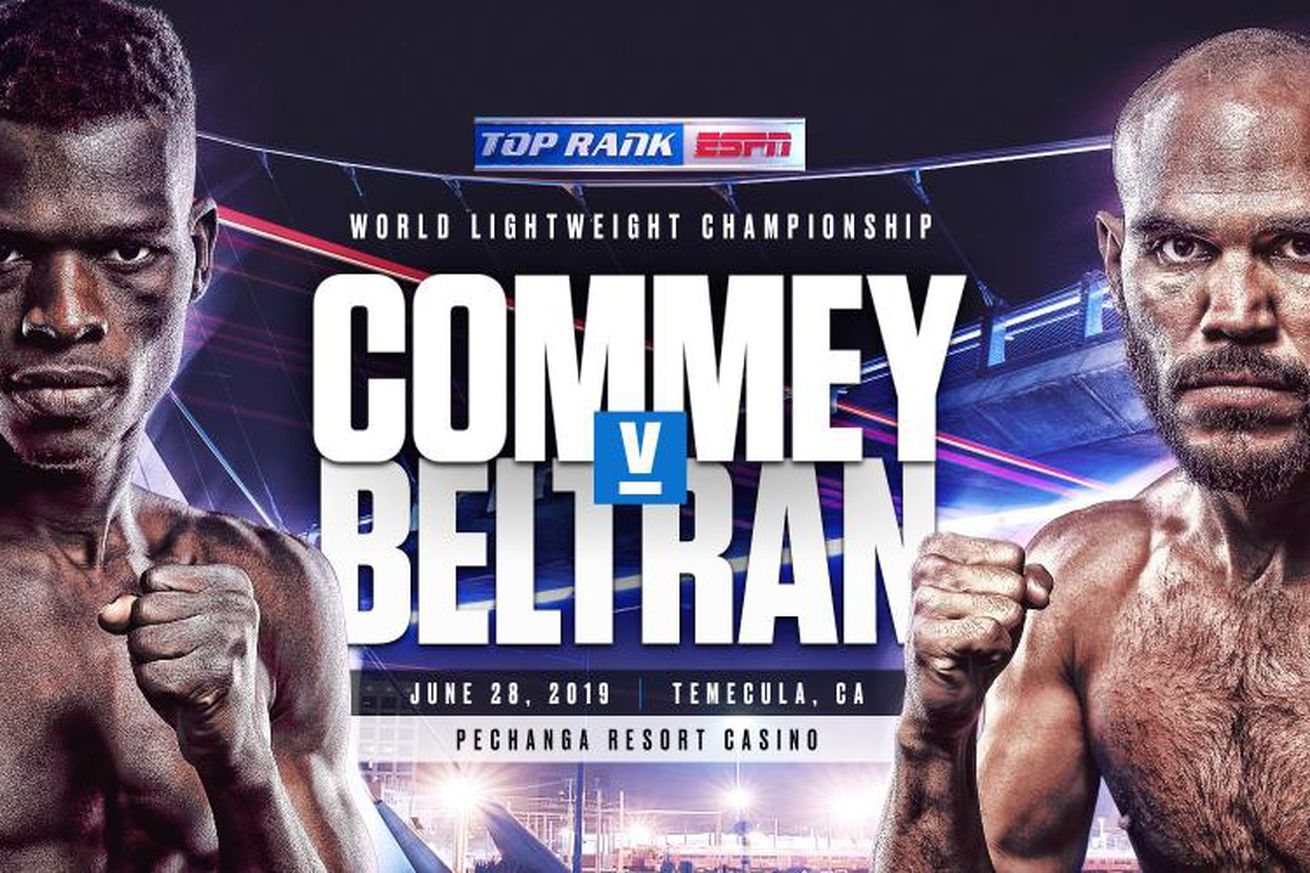 Richard Commey and Ray Beltran headline this Friday on ESPN.

Commey (28-2, 25 KO) is defending the IBF lightweight title that he won on Feb. 2 by beating Isa Chaniev for the vacant strap via second round stoppage. That victory was meant to set up an April fight with Vasiliy Lomachenko, but Commey hurt his hand in the two minutes and 39 seconds of action, and the Loma unification was put off. Instead, we’ve got Commey returning against Beltran (36-8-1, 22 KO), a former titleholder and solid veteran.

How did Richard Commey get here?

The 32-year-old Ghanaian turned pro after a brief amateur career in 2011, fighting his first 11 fights at home in Ghana, and in the 11th winning the Ghanaian lightweight title, a minor accomplishment. In early 2012, he made his way to England, where he fought a pair of bouts at London’s famous York Hall. The second of those was a solid win over Kris Hughes, a stoppage after four rounds.

After two more fights in Ghana, Commey was back at York Hall in July 2013, beating Paul Truscott via eighth round stoppage, and again a year later, beating Gary Buckland. He then fought in Denmark for two outings, then South Africa, and in May 2015 made his US debut with a TKO-8 win over Bahodir Mamadjonov on a Roy Jones Jr-promoted card in Las Vegas.

The globe trotting continued, Germany to Denmark to Pennsylvania, the latter a fight with Robert Easter Jr for the vacant IBF lightweight title in Sept. 2016. Easter got the split decision win to claim the belt. A trip to Moscow against longtime contender Denis Shafikov followed, as did another split decision loss.

Commey, undeterred, returned to Ghana for a win over Hedi Silmani, then came back to the US in March 2018, stopping previously unbeaten Alejandro Luna in an IBF eliminator. A stay-busy win last August over Yardley Cruz led to the fight with Chaniev for the belt, once again vacant. This time, Commey took the belt in dominant fashion, firmly establishing himself as a top 135-pounder.

How did Ray Beltran get here?

The 38-year-old Beltran has been around a long time, turning pro in July 1999 at the age of 18 in Tucson. Born in Mexico, the veteran has fought his career out of Arizona, and not one step of it has come easy.

Beltran, to be honest, was never meant to be a star fighter, a world champion, a serious contender, a type to main event shows on ESPN or the like. He lost his third pro fight in Dec. 1999, and his seventh bout in May 2001 in Michigan, a fourth round stoppage after dropping opponent Steve Trumble twice in the second round.

Beltran did rattle off a streak from there, winning his next 11, but lost again to Agnaldo Nunes in March 2005, and then to Ammeth Diaz in 2008. Over those years, Beltran gained a bit of notoriety as a regular sparring partner for Manny Pacquiao, but once the bell rang for real, he was looked as an opponent — tough and game, no doubt, but a fighter who would lose when the fight meant something.

That continued on with losses to Sharif Bogere in 2011 and Luis Ramos Jr in 2012, but six months after losing to Ramos, Beltran won a majority decision over Hank Lundy in Atlantic City, the best victory of his career to that point. He followed with wins over Ji Hoon Kim and Alejandro Rodriguez, and then received his first world title shot in Sept. 2013, a trip to Glasgow to face Ricky Burns for the WBO lightweight belt.

Put frankly and plainly, Beltran was robbed in Scotland when the judges turned in scores amounting to a draw. He clearly beat Burns that night, and deserved to have had the great win. Burns was down in the eighth, had bravely, to his credit, fought through a broken jaw the majority of the bout — but he was beaten. And he was lucky to leave with his belt.

Beltran got a second title shot in Nov. 2014, this time routed by rising star Terence Crawford, no controversy to that one. But Beltran got yet another shot in his next fight after Crawford had given the belt up. Beltran beat Takahiro Ao via second round TKO, but first of all hadn’t made weight, so he couldn’t win the belt, and worse, he failed a drug test, turning the decision into a no-contest.

After a year out of the ring, Beltran was back in action winning a pair of tune-ups before a wicked knockout of Mason Menard in Dec. 2016. Another followed over Jonathan Maicelo in May 2017, then a majority decision over Bryan Vasquez two-and-a-half months later.

In Feb. 2016, Beltran fought for the WBO lightweight title for the fourth time, once again vacant. He beat Paulus Moses by decision, and this time it stood. Finally, Ray Beltran had won a world title.

Celebration would be hearty but brief, as six months later Beltran was outboxed by Jose Pedraza, dropping the title. In February of this year, Beltran moved to 140 for a competitive TKO win over Hiroki Okada, but is moving right back to 135 with another title opportunity presenting itself.

Commey will have some mild physical advantages. He’s an inch taller at 5’9”, and will have a three-inch reach advantage, 71” to 68”. He also probably has the power advantage. Beltran’s game is to get inside and work, and Commey will probably try to keep him at some distance and do damage from there. They have the ingredients for a really entertaining fight, to put it another way.

No odds listed yet that I’ve seen, but Commey figures to be at least a slight favorite. It’s a good matchup, though.

Check back for our staff predictions on Thursday at Noon ET!

Bad Left Hook will have live coverage of Commey vs Beltran on Friday, June 28, starting at 10 pm ET on ESPN, with prelims at 7 pm ET on ESPN+