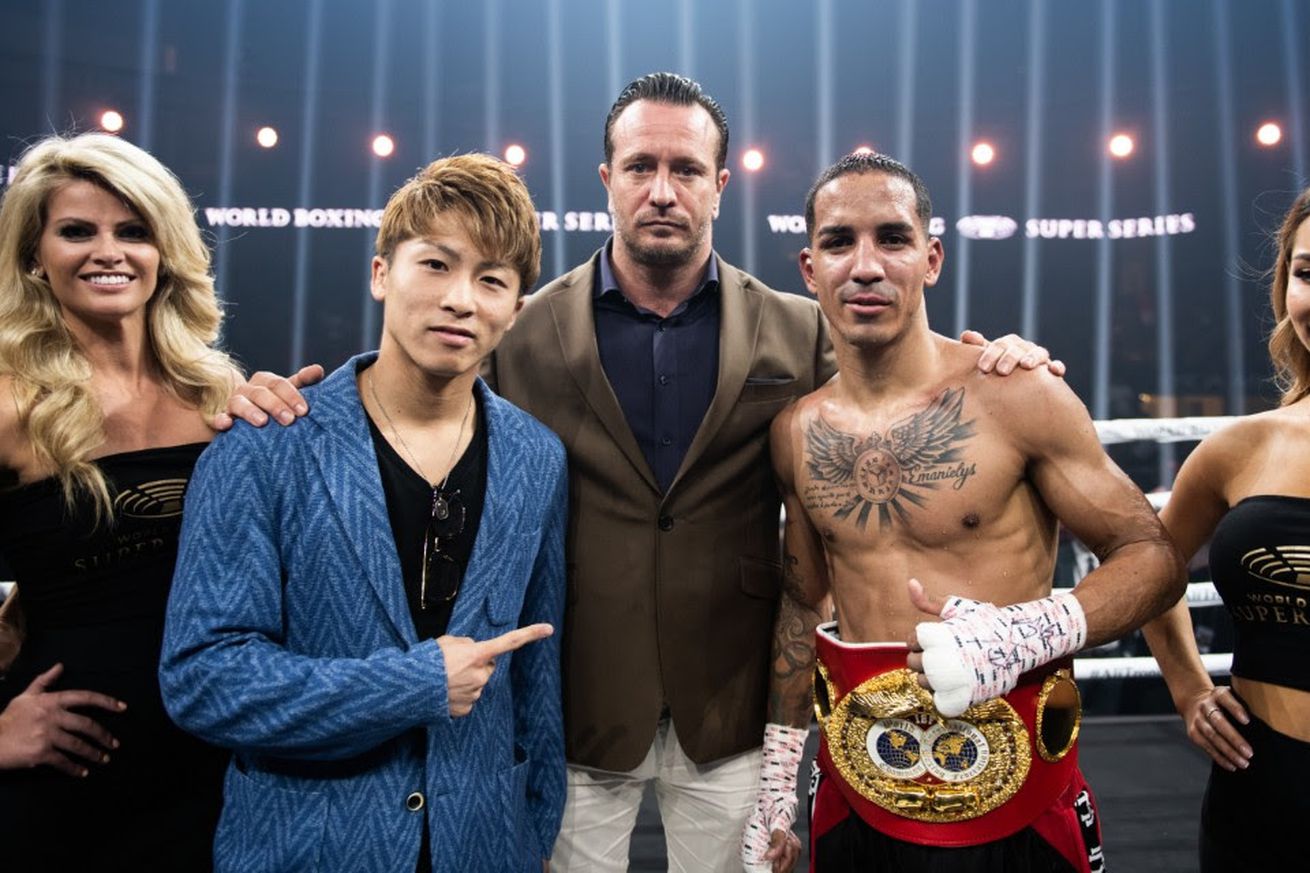 Naoya Inoue and Emmanuel Rodriguez meet in a big bantamweight showdown in Glasgow.

This Saturday in a World Boxing Super Series bantamweight tournament semifinal from Glasgow, Naoya Inoue returns against Emmanuel Rodriguez, no doubt looking to destroy another opponent. Here’s a look at the fight, which will stream live on DAZN in the United States.

Puerto Rico’s Rodriguez (19-0, 12 KO) will arrive in Glasgow with the IBF bantamweight title, and Inoue (17-0, 15 KO) with the WBA’s secondary “world” bantamweight title. Usually, the WBA requires you to be a “super world” champion to be able to unify, but an exception is being made here, probably in part because the winner will be facing “super world” champion Nonito Donaire in the final, anyway. And the vacant Ring Magazine bantamweight championship is also going to be on the line.

How did Naoya Inoue get here?

“Monster” Inoue was a good amateur in Japan, winning silver as a light flyweight at the 2010 Japanese National Championships and running up a reported 75-6 record overall. He went after an Olympic bid at light flyweight in 2012, but lost to Kazakhstan’s Birzhan Zhakypov at the 2012 Asian qualification tournament.

In Oct. 2012, Inoue turned pro, knocking out Filipino journeyman Crison Omayao in the fourth round at Korakuen Hall. Not looking to mess around out there, Inoue moved fast. In his fourth pro fight in Aug. 2013, he beat Ryoichi Taguchi by decision to win the Japanese junior flyweight title, a win that has aged incredibly well, as Taguchi went on to win a world title at 108 and challenge for a title at 112 earlier this year.

Inoue took the regional OPBF title in his next fight, stopping Jerson Mancio in the fifth round. The next step was a world title, and he achieved that, too, stopping Adrian Hernandez to win the WBC 108-pound title in April 2014. Inoue made a successful defense against Samartlek Kokietgym, and then got really ambitious, opting to leave junior flyweight, skip flyweight entirely, and move up to super flyweight to face Argentine veteran Omar Narvaez, who had held the WBO title since 2010.

Narvaez had built a reputation over the years for being the crafty sort of guy who, if up against it, could capably stink out the joint. A lot of that came from a 2011 bid at bantamweight, where he happily took HBO’s money and then avoided contact with Nonito Doanire as best he could for 12 full rounds.

But Inoue was another story. There’s no way to put it other than putting it plain: Inoue completely destroyed Narvaez, knocking him down 26 seconds into the fight, and then putting him down again just 34 seconds after that. Narvaez, at 39, had no choice but to try to match fire with fire, as he just couldn’t get away from Inoue. That suited Inoue, it did not suit Narvaez. Narvaez went down two more times in the second round, and didn’t beat the count on the latter of those floorings.

What Inoue did to Narvaez alerted the world that in eight pro fights, we had a guy who was a contender to be on the pound-for-pound list. And Inoue hasn’t looked back from there.

Since thrashing Narvaez, Inoue has lived up to his nickname. He beat Warlito Parrenas in six, did have to go the distance with David Carmona in 2016, and has won his last seven fights by stoppage, beating Petchbarngborn Kokietgym (KO-10), Kohei Kono (TKO-6), Ricardo Rodriguez (KO-3), Antonio Nieves (RTD-5), Yoan Boyeaux (TKO-3), Jamie McDonnell (TKO-1), and Juan Carlos Payano (KO-1).

The last two fights there, McDonnell and Payano, were another move up in weight, as Inoue stepped to bantamweight in 2018. If anything, he’s been more destructive than ever, ripping through a couple of good, solid pro fighters in a combined three minutes, and winning a claim to a third world title.

Simply put, if you’ve never seen Naoya Inoue, go seek him out via YouTube. And make sure you tune in Saturday. This is a can’t-miss fighter, 26 years old, comes to wreck shop, comes to win by knockout. He’s been a machine.

How did Emmanuel Rodriguez get here?

The 26-year-old Emmanuel Rodriguez has had a much quieter run in pro boxing, but quite successful all the same. Like Inoue, he was a good amateur, but didn’t have the big success at the highest-profile tournaments. He did win flyweight gold at the 2010 Youth Olympics in Singapore, and then later that same year, everything nearly came to an end.

In Nov. 2010, Rodriguez and a friend attempted to light a car on fire, having poured gasoline on the vehicle. Instead, Rodriguez wound up lighting himself on fire, suffering second-degree burns on two-thirds of his body. He wouldn’t fight again for 10 months, but did get a chance to qualify for the 2012 Olympics, the path he had been on before the accident. He wound up losing to young Jeyvier Cintron in one tournament, and to Eddie Valenzuela in another. Cintron beat him again in April 2012, and having failed to earn an Olympic berth, he decided to turn pro.

Rodriguez made his pro debut in June 2012 in Guaynabo, a TKO-1 victory over the also-debuting Jason Agosto, who would fight a few more times and get stopped each time out. In his 10th pro fight, Rodriguez won a minor WBO tile, knocking out Miguel Cartagena in the first round. A Nov. 2015 win over Eliecer Aquino was another good step up the ladder, as was a follow-up victory over Alberto Guevara in June 2016.

In May 2018, Rodriguez traveled to London to face Paul Butler for the vacant IBF bantamweight title. He dropped Butler, who had badly missed weight, two times in the opening round, and went on to completely dominate the fight over 12 rounds, winning on scores of 118-108, 120-106, and 120-106.

He then signed up for the World Boxing Super Series tournament, and was matched with mandatory challenger Jason Moloney in the opening round in Orlando. Rodriguez faded a bit late in the fight, but was able to outlast the Australian and come away with a split decision victory.

As far as dimensions go, there’s not much separating these two. Rodriguez is 5’6” with a 66½-inch reach, with Inoue listed at 5’5” with a 67½-inch reach. So they’re each giving up an inch either way, which isn’t much of anything.

As far as competition and results go, you have to favor Inoue, and that probably goes for the style, too. Rodriguez is a good fighter. Inoue has chewed up good fighters and spit them out for a while now. Outboxing Inoue, keeping him at bay, sounds a lot easier than it is. He’s not some unskilled mauler or anything, he attacks with power, speed, and accuracy, and can totally overwhelm opponents.

There’s no question that Inoue is the favored man here. As of this writing, various books have Inoue listed between -769 and -1250, with Rodriguez between +450 and +645. Those aren’t the worst odds you’ll see for a world title fight or anything, but they make things pretty clear about how the fight is being seen.

Check back for our staff picks on Friday at Noon ET!

Bad Left Hook will have live coverage of Inoue vs Rodriguez at 2:00 pm ET on Saturday, streaming live on DAZN

3 thoughts on “Preview: Inoue vs Rodriguez”