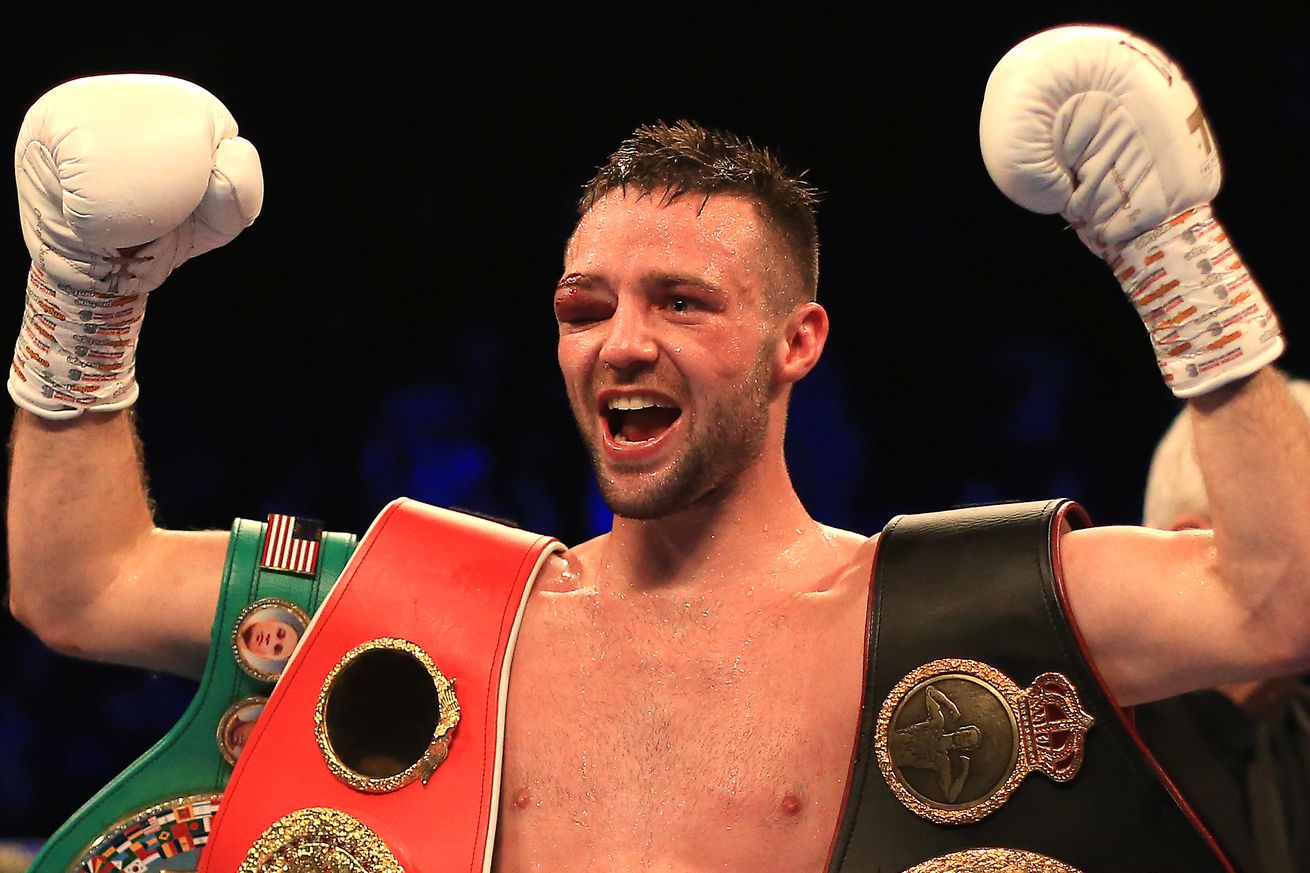 Josh Taylor’s WBA and IBF junior welterweight titles are on the line Saturday in London.

This Saturday streaming live on ESPN+ in the United States and airing on BT Sport in the United Kingdom, unified 140-pound titleholder Josh Taylor will return to action for the first time in 11 months, facing mandatory challenger Apinun Khongsong in a main event from London’s historic York Hall.

The 29-year-old Taylor (16-0, 12 KO) was last seen in the ring in Oct. 2019, beating Regis Prograis at O2 Arena to bring the IBF and WBA junior welterweight titles together, and also hoisting the Muhammad Ali Trophy as winner of the World Boxing Super Series tournament. It was a terrific fight (you can watch it in full here) that lived up to the hype it had going in, and Taylor proved he was far from overrated, taking the majority decision — but a clear win for most, even though Prograis was tremendously competitive.

The Scottish star has since had an eventful time outside of the ring. In early January, he signed with Top Rank, and that brought about Cyclone Promotions claiming a breach of contract. That never really went anywhere as far as actually disrupting Taylor’s activity, as he was due to fight Khongsong (16-0, 13 KO) on May 2, before COVID-19 caused global lockdowns and put boxing on hold for three months between March and June.

How to Watch Taylor vs Khongsong

But it does mean that Taylor will no longer be trained by Shane McGuigan, whose father Barry is the promoter behind Cyclone. Taylor and McGuigan had terrific chemistry and helped make names for one another, and now Taylor is coached by Ben Davison, who is mostly known for helping whip Tyson Fury back into shape, and also working with Fury’s friend Billy Joe Saunders for a spell.

Davison still has some skeptics as far as his actual boxing training expertise goes. Everyone gladly admits he did marvelous conditioning work for Fury, and the two had success together in the ring, too, but Fury came to a point where he decided to part with Davison — amicably, mind you — and go to SugarHill Steward at the Kronk Gym. And Saunders has since gone to Mark Tibbs, whose father Jimmy trained Billy Joe from 2009-15.

For what it’s worth, Taylor and Davison seem very confident publicly, and come off as though they’re getting on quite well.

Taylor has good wins over not just Prograis, but also Ivan Baranchyk and Viktor Postol, both of them still legitimate contenders at 140. He is, at the very least, a really, really good fighter, potentially great. But if anything might make you have even a hint of doubt about Taylor in this fight, it might be the fact that he’s going at it with a new trainer, and also possibly the idea that he might be getting ahead of himself at this point.

Khongsong, a 24-year-old fighter from Thailand, is a Sampson Lewkowicz guy, but other than that there’s not a lot to go on with his career record. He’s mostly fought journeymen and less than that, but a Feb. 2019 win over Akihiro Kondo at the famous Korakuen Hall in Tokyo showed that he does have legitimate power. Kondo’s lost nine fights in his career counting that one, but that’s the only time the Japanese veteran has ever been stopped, and he’s been in against some good fighters.

The Lewkowicz connection is the thing that, other than Taylor’s trainer switch, might be what perks interest most. Lewkowicz doesn’t always connect on his talent finds, of course, nobody does. But this is the guy who first got both Manny Pacquiao and Sergio Martinez going in their careers, and those guys are both headed to the Hall of Fame; Pacquiao obviously, and Martinez more likely than not.

Both fighters are listed at 5’10”, so there will be no big height advantage here. The safest idea going in is that Taylor’s skill and experience will win out, possibly quite handily. But Khongsong is such a relative unknown, and a total unknown at this level, that it’s hard to be 100 percent confident. We really don’t know how good he is or isn’t.

If Taylor does win, it’s expected he’ll move on to an undisputed title fight against WBC/WBO titlist Jose Ramirez, who just had some struggles against Viktor Postol but came out with the victory on Aug. 29. Ramirez said after that fight that he’s completely willing to go to the United Kingdom if that means fans can attend the fight, but frankly it’s not looking like either the U.S. or U.K. will be having notable crowds at fights any time soon. That may mean we would wait a bit longer than hoped for the possible Taylor-Ramirez fight, but it also may not. While boxing promoters have mostly tried to just fill slots during “the COVID era,” at some point more good fights are just going to have to be made with the acceptance that they just aren’t going to be the money generators once envisioned.

Former WBC flyweight titleholder Charlie Edwards (15-1, 6 KO) will return to action on the card, his first fight since his weird no contest in Aug. 2019 against Julio Cesar Martinez, where Edwards was getting thrashed by the Mexican challenger in London, only for a late shot to originally be called a third round stoppage, then immediately changed by the WBC to a no contest while everyone was still in the ring, which just doesn’t happen often.

Edwards opted to vacate his title instead of take on Martinez again, and has also defected from Matchroom to Queensberry, a move that came in late May. The 27-year-old will be fighting at bantamweight on Saturday, skipping over the 115-pound division at least for the moment, as he takes on Kyle Williams (11-2, 3 KO), a 28-year-old from Wolverhampton.

Williams has lost two of his last three, stopped by Kash Farooq in Apr. 2019 and then dropping a split decision to Ionut Baluta six months later. He’s got no wins of any real note, as Farooq and Baluta were by far the two best opponents he’s faced to date. On paper, this is a tune-up for Edwards, maybe to see how he feels fighting at 118, and if that’s the challenge for him now, or if he might want to cut down to 115 for bigger fights right now.

The aforementioned Baluta (13-2, 2 KO), a 26-year-old Romanian, will also be in action on Saturday, as he faces former amateur standout Davey Oliver Joyce (12-1, 9 KO), a 33-year-old Irishman whose career hit a speed bump last October when he was stopped in nine by Leigh Wood. Joyce is a solid talent, but a bit old for where he’s at in his career. Still, he looked sharper in a TKO-5 win over veteran Lee Haskins on Feb. 1, where Joyce moved down from 126 to 122, having fought as high as 135 earlier in his late-beginning pro career.