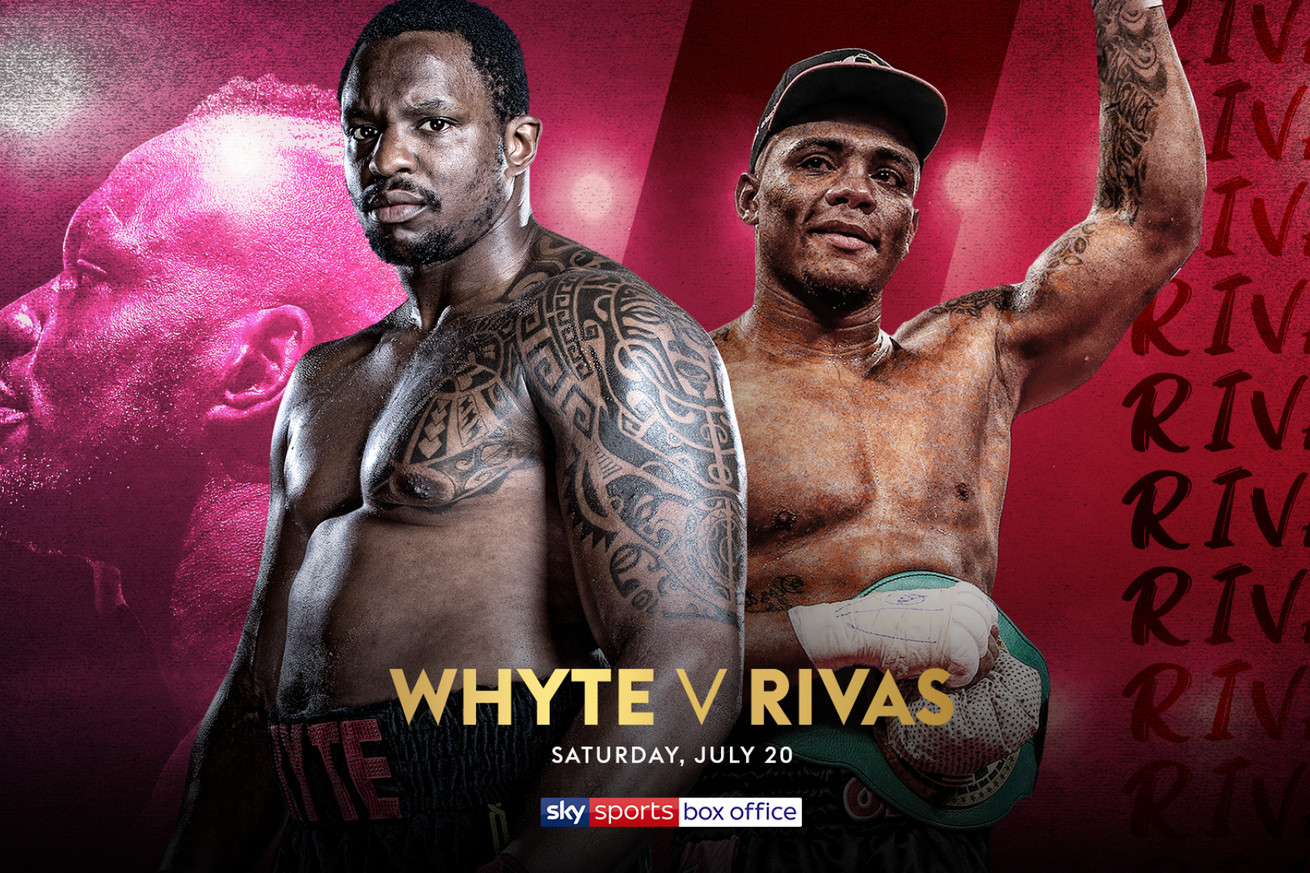 This Saturday in London, Matchroom Boxing has a big trio of heavyweight matchups, airing live on DAZN and Sky Box Office.

Let’s take a look at the three fights.

Whyte (25-1, 18 KO) and Rivas (26-0, 18 KO) will be fighting for the interim WBC title, and a guaranteed shot at the full belt by July 2020. So ends Dillian Whyte’s long battle with the WBC to recognize his status as their No. 1-ranked contender and the guy who’s held their “silver” title for nearly two years.

Whyte, 31, has become a top contender in the division following a Dec. 2015 loss to Anthony Joshua, which was a British title fight back before Joshua had won his first world title. It was expected, actually, that Whyte would rematch Joshua earlier this year at Wembley Stadium, but he wound up turning it down, feeling the deal wasn’t good enough. It was a gamble, but his focus was clearly on that WBC belt, not on Joshua, and at the very least, he has a chance to get a chance. You can debate whether it was worth it or not after seeing Andy Ruiz Jr beat Anthony Joshua in June.

Whyte’s run of wins since that loss to AJ has been solid, but not exactly spectacular: Ivica Bacurin, Dave Allen, Ian Lewison, Dereck Chisora, Malcom Tann, Robert Helenius, Lucas Browne, Joseph Parker, Chisora again. The best wins have been against Parker and Chisora, and all were very competitive.

Rivas, 32, is a former Olympian, a Colombian now based in Montreal. His pro career began a decade ago in Canada, and to be frank, never really went anywhere. Six years in he was still facing the likes of Jason Pettaway, Joey Abell, and Jeremy Bates. Eight years in, Carl Davis Drumond. He was unbeaten, but he wasn’t beating anybody.

After a decision win over MMA veteran Fabio Maldonado in Dec. 2018, which went a full 10 rounds, Rivas got back in the ring six weeks later to face Bryant Jennings in an ESPN+ main event from Verona, New York.

Rivas came in the underdog, as Jennings was the house fighter and the A-side, and for much of the fight, it appeared Jennings was in control. Then in the 12th, Rivas poured it on, feeling he needed a knockout, and he got it just 54 seconds into that final round. (As it turned out, Rivas did not need the KO — he led on split decision scores of 105-104, 106-103, and 103-106, so at worst if he’d just lost a normal round, he’d have left with a draw, but that’s neither here nor there.)

The win over Jennings was the best of Rivas’ pro career and vaulted him into the discussion at heavyweight, at long last. He has a real chance to prove he’s for real on Saturday, but it’s going to be difficult.

Whyte has some physical advantages, standing 6’4” with a 78-inch reach. Rivas is just over 6’0” with a 76½-inch reach. But he has some skills and some pop, and Whyte has been pushed hard before by guys who weren’t exactly elite. It’s a potentially interesting fight and the result will be meaningful as far as future title fights go.

The 35-year-old Chisora (30-9, 21 KO) is a weird, inconsistent fighter, and now a veteran who is what he is: a solid second-tier heavyweight who, on the right night, can be a very tough out.

Now working with trainer Dave Coldwell, he came back in April and won a deadly dull decision over Senad Gashi. Gashi had no intention of engaging with Chisora, who was happy to coast, working under some idea that in his mid-30s he could become a boxer first instead of a brawler.

But if anyone can bring out the crazy old brawling Chisora, it’s Artur Szpilka. Szpilka (22-3, 15 KO) picked up a little hype years back, then lost to Bryant Jennings in 2014, and to Deontay Wilder and Adam Kownacki in back-to-back fights in 2016-17. Like Chisora, he is what he is, but he can be fun to watch.

At their cores, both Chisora and Szpilka are pretty wild dudes, the type who can rather easily get into a batty dust-up where the fists are just flying. Chisora may not come in with that plan, but Szpilka is the type who can pull it out of him. If we’re lucky, it’ll be a war, and if Szpilka gets his way, that should be what it is. But you never know, Chisora’s been in some snoozers over the years.

The big reason is that Price, once a blue chip prospect but long busted, has about three or four rounds of fight in him anymore. His chin isn’t much and his stamina isn’t any better. So if he doesn’t blast opponents out pretty early, or they aren’t hopelessly overmatched, he’s just not going to win. At 36, Price has accepted what he is, and so has everyone else.

Allen, 27, has always been easy to root for, a funny and genuinely charismatic guy, both things kind of rare for boxing. Even more rare, he’s always been candid about his setbacks and shortcomings. He’s a blue collar everyman sort, and for years, frankly, he looked like one — a bit doughy in the midsection, wouldn’t easily be mistaken for a bodybuilder. After turning pro in 2012 with a weight of 232, he got up to 272 for a fight in May 2018, and then was over 260 for a loss to Tony Yoka in June 2018.

Over the years, it looked as though Allen would just be a solid journeyman type. He lost to Dillian Whyte and Luis Ortiz in 2016, Lenroy Thomas in 2017, Yoka in 2018. But then last July, a month after losing to Yoka, something changed for Allen in the ring.

He was matched with unbeaten prospect Nick Webb, and knocked Webb out in the fourth round. He won two more fights to close out the year, then was 13 pounds lighter than his previous fight when he faced Lucas Browne in April, a main event fight at London’s O2 Arena. Looking in the best shape he’d been in in quite a while, Allen drilled the old veteran with a body shot and knocked him out in three.

It’s true that Browne is/was quite well past it, but it was still a career-best win for Allen, and as he’s said a few times, in boxing but especially the heavyweight division, you’re always just a couple fights away from maybe getting a world title shot. This matchup with Price is one he should win, and then maybe you match him with the Chisora-Szpilka winner later this year. By the end of 2020, if he keeps winning, Dave Allen of all the people could be in a world title fight.

Bad Left Hook will have live coverage of Whyte vs Rivas starting at 1 pm ET on Saturday, July 20, streaming live on DAZN