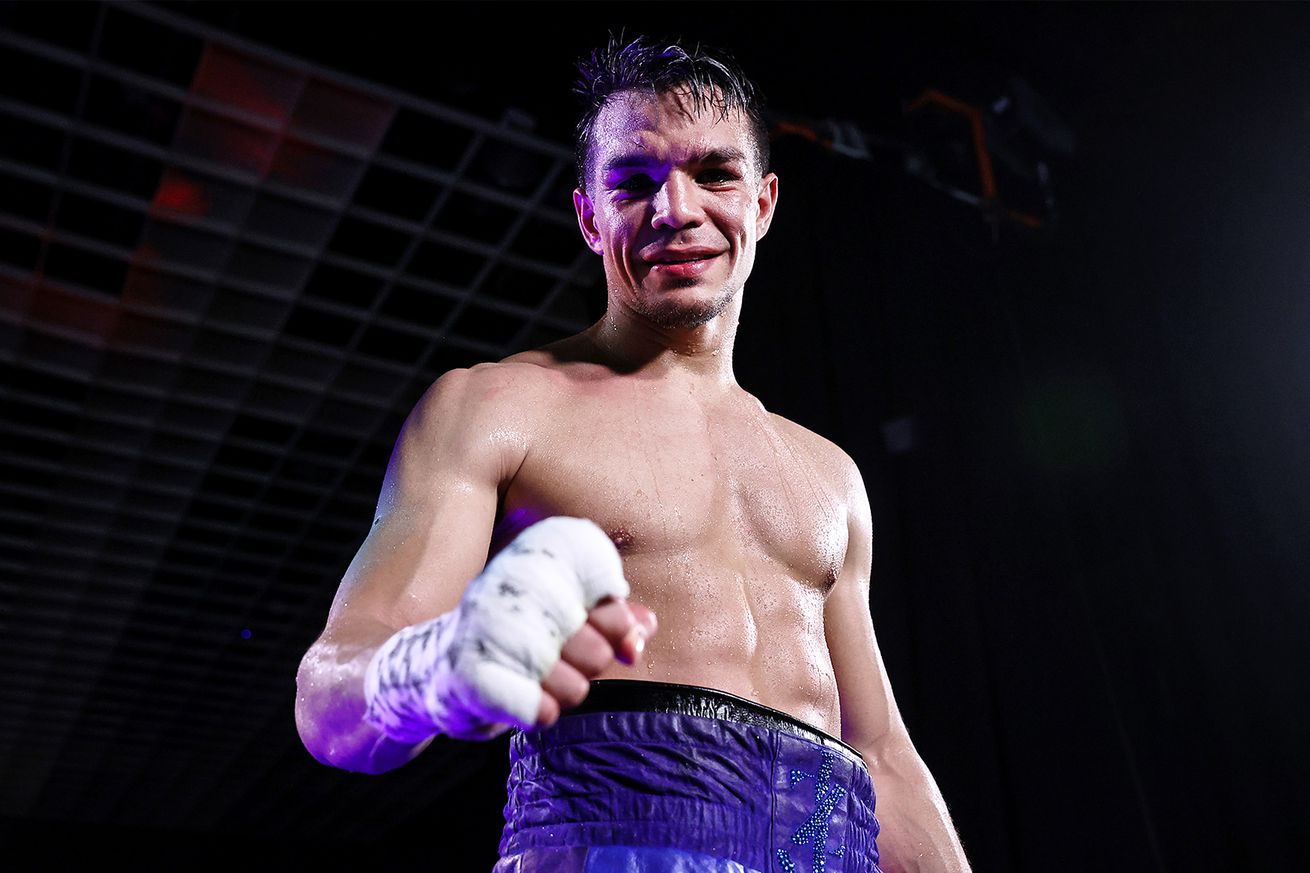 The junior welterweight contenders are very different fighters, which could be really good or really bad for each of them on Saturday.

Saturday night’s main event between Jose Zepeda and Ivan Baranchyk may not be a blockbuster showdown, but the Top Rank bout pits two top five-ish guys at 140 pounds against one another in a WBC eliminator, and is a meaningful matchup worth tuning in to see — and could have some interesting drama and a useful stylistic clash.

“Chon” Zepeda (32-2, 25 KO), a 31-year-old fighting out of California, is one of the sport’s weirder legit contenders. Back in 2015, he got the call to go over to Manchester and face Terry Flanagan for the vacant WBO lightweight title, despite the fact Zepeda had never fought at lightweight before, only flirting with the limit (but still over it) in a couple of fights in 2013.

Zepeda started well in the first round, but suffered a dislocated shoulder near the end of the second and had to retire from the fight. It was a dreadful way to lose your first big career opportunity, and another wouldn’t come until 2019, when he got a shot at Jose Ramirez’s WBC junior welterweight title.

Between the Flanagan and Ramirez fights, Zepeda had gone 7-0 (5 KO) with one no-contest, all the fights taking place in Mexico. (In the fight after he came back from the injury against Flanagan, he and Jose Alfaro went to a NC after one round due to a bad cut on a clash of heads.)

How to Watch Zepeda vs Baranchyk

But Ramirez represented a big step up in competition, so it was really mostly about how well Zepeda might do. He did pretty well, overall, taking Ramirez the distance in a majority decision loss. Zepeda started pretty well but faded down the stretch a bit, allowing Ramirez to take over late. Zepeda had never fought 12 rounds before, and only gone past six rounds three times to that point.

It’s a problem that we’ve seen repeat, too, and a big worry for Zepeda in general. He beat Jose Pedraza in Sept. 2019, and that’s the part people remember, but Pedraza was the fresher man down the stretch of that 10-round fight, too, and we saw bits of it happen on July 7, as Zepeda clearly beat Kendo Castaneda, but had his troubles, this time in the middle rounds, and wasn’t able to keep the same pace throughout the fight.

Pace and conditioning will both be key against a fighter like Ivan Baranchyk, the 27-year-old from Belarus who has settled in Miami, Okla., of all the places, where he’s very popular with the locals and got his boxing career really going, fighting on ShoBox cards and the like.

There’s even a story about one of his fights there at the Buffalo Run Casino, a ShoBox bout, where Showtime production people were a bit worried that Baranchyk going on last against another non-local could wind up having an empty crowd, so they asked if maybe one of the more popular local undercard guys could be held until after the televised main event, to keep people in the room. But local promoter Tony Holden just laughed and assured them it would be fine. Baranchyk had become a “local fighter,” basically, and overall fought at the venue six times.

Now he’s on the bigger stages. He entered the World Boxing Super Series in 2018, and bashed through Anthony Yigit, a former Olympian, in the quarterfinal round, which also won Baranchyk the vacant IBF title. In his semifinal bout, he went to Scotland to defend against Josh Taylor, and gave a big effort but was rather out-classed overall, with Taylor winning a clear decision. He came back from that in October of last year, beating veteran Gabriel “Tito” Bracero via fourth round stoppage.

Baranchyk’s loss to Taylor might be the best place to see his style in action, though. Yeah, you can get better highlights of it in the Yigit fight or some of his other wins, but the Taylor fight demonstrated that Baranchyk truly does not have another speed. He comes forward, he swings wild, full-power shots all the time, and you will not get him to stop doing that just because you’re better than him, either. There was never a point in that fight where Baranchyk gave up on it or just tried to survive. He does not stop coming forward. He is one of high-level boxing’s most relentless fighters these days.

That sort of style and game plan could be a real problem for Zepeda and his issues with fatigue and even some defensive lapses. At the same time, I think few would argue with the idea that Zepeda is a much more technically skilled boxer than Zepeda.

Both of these guys have what seem like stylistic edges that could, in theory, be neutralized by the edges the other guy brings to the fight. This one could get really, really interesting, and I think has a higher than normal chance for some real drama.

Junior lightweight prospect Gabriel Flores Jr (18-0, 6 KO) will return to the ring for the third time this year, as he was able to get in a win over Matt Conway on Feb. 22 before everything shut down, and then was bumped to a late notice main event on ESPN in June, beating Josec Ruiz over 10 rounds.

The 20-year-old Flores, originally from Stockton, Calif., and now based in Vegas, is one of Top Rank’s clear favorite prospects, but his ceiling is still up for some debate, at least in my view. I’ve seen the kid a lot now, what with this being the era of expanded broadcasts and prelim streams and the like, and he’s had a few notable card positions already, because, again, Top Rank really like him.

Flores has good boxing skills, but not the sort that you gawk at just seeing him do his thing, and while I’m not saying his opposition has been soft — it’s been perfectly fine for his development level — he has fought the sort of guys that, if he had those sort of skills, you might gawk a little at times.

As far as power, the KO rate kinda says it all. He did goom the hell out of Eduardo Pereira dos Reis back in May 2019 with a clean lead left hook, but he’s fought five times since then and gone the distance every time out. He’s not a power puncher, and the wait for his “MANSTRENGTH!!!!!!!!!!” might be eternal. Some guys just aren’t punchers.

On Saturday, he’s matched against 31-year-old Ryan Kielczewski (30-4, 11 KO), one of those northeast guys who built up a record on regional shows and had just the slightest bit of buzz back in 2015, before he lost an eight-round decision to Danny Aquino. He’s 8-3 since then, but he’s got a clear level, and it’s winning eight-round fights in Massachusetts towns like Quincy, Plainville, and Quincy.

But Kielczewski is a decent next step for Flores, too. The veteran comes to fight, as evidenced by a 2018 battle he had with Tommy Coyle in Boston. He lost clearly to Coyle, but it was a really entertaining scrap. If nothing else, he might be able to test Flores’ motor and how he responds with someone who comes forward more than others have, who maybe won’t be as easily deterred as others have been.

Flores-Kielczewski is set for 10 rounds.

Italian heavyweight prospect Guido Vianello (7-0, 7 KO), a 26-year-old ex-Olympian and another Top Rank house favorite. Vianello is also now based in Vegas, as he clearly had no great desire to start his pro journey at home, where it would have been a bit more difficult for him to get the early buzz that he’s enjoyed fighting under the Top Rank banner. He would’ve fought about the same level opposition thus far, to be fair, but he wouldn’t have the slight bit of recognition with the American fan base in particular that he does now.

Vianello will be facing 26-year-old Kingsley Ibeh (5-1, 4 KO), a native of Nigeria who moved to the U.S. as a teenager, took up football, played in college, was briefly with a CFL team — all of this football stuff somehow never gets mentioned when he fights on Top Rank broadcasts, maybe he just doesn’t bring it up — and turned pro in boxing in Aug. 2019.

Ibeh gained some fans by fighting on a couple of the Top Rank summer cards, and doing so in back-to-back weeks. On June 25, he stopped Waldo Acosta in the fourth round; that fight was a rematch from Ibeh’s only pro loss, which happened in Oct. 2019. The next week, he looked predictably sluggish against Patrick Mailata, winning a majority decision over six rounds.

But Ibeh throws his hands, and will come to fight. The problem he faces here is that Vianello is just a lot more skilled than he is, a lot better-schooled. Vianello is a legitimate, higher-end heavyweight prospect; Ibeh is a project. This fight is also set for six rounds.

In addition to those bouts, we’ll have the usual Top Rank Parade of Prospects on the undercard, all of these fights set for 4 rounds: