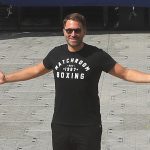 Boxing promoters are used to dealing with curveballs that mess up the best laid plans at the 11th hour. Usually, though, they themselves aren’t the curveball.

At 4:42 local time, the Hearn Twitter account read, “Gutted to just find out I tested positive for Covid-19 today and have to leave the bubble immediately. Thankfully all other tests were negative. Heading home to rest – catch up tomorrow.”

The fights are still on the track for the Matchroom show at Marshall Arena, and fights are to be shown live on Sky Sports in the UK and DAZN in the US.

A press release from Matchroom which went out before the Hearn news spoke on the protocol for the event. “The testing of all boxers, their teams and support staff began at the start of the week, with individuals being tested for Coronavirus before being allowed entry into the official hotel bio bubble to participate in the media events.” The subject of COVID, and an uptick in cases in England, came up when I chatted with Las Vegas based promoter Bob Arum, often a rival but sometimes a business partner with Hearn, on Wednesday.

Around Sept. 6, numbers of positive tests started to get to a point in England where worry among pols started to bubble up. On Sept. 12, the number of cases went over 3,000 for the second day in a row. On Sept. 22, Prime Minister Boris Johnson said they’d start fining more for rules-breaking, and a week later, more bad news. The UK showed the most cases since July, and talk of a nasty “second wave” intensified. By late Wednesday, though, news came out that the uptick may be slowing. Then, Thursday, the Hearn news.

I asked Arum about the UK COVID uptick, and if that was affecting any planning he was doing for fights to year end. For instance, we know he’s keen to make a Kubrat Pulev title challenge against Anthony Joshua, a Matchroom boxer. Indeed, Arum said him and Hearn were liking Dec. 12 as the date for AJ vs Pulev, the Top Rank pugilist. “Eddie is hoping for a limited number of spectators,” he said, about a clash that would take place in England. “But he knows it’s possible it would just be in a bubble. When you’ve got plans, you know they can be upset.”

Arum said he was of a frame of mind that change can come rapidly, with the virus’ ability to usurp plans. He’s doing the Vasiliy Lomachenko versus Teofimo Lopez lightweight matchup in Las Vegas Oct. 17 and is looking forward to the new ability to allow up to 250 people into the facility, apart from production staff. “But it will be very strict, still.”

The BBC posted a story about the Hearn positive. I emailed the promoter, asking if he was feeling OK, and will add his reponse when furnished.