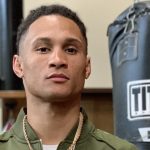 For Regis Prograis dramatic events that turn the world on its very axis have become almost commonplace.

The 31-year-old endured the challenge of Hurricane Katrina in his native New Orleans in 2005, and Hurricane Harvey in Houston in 2017.

The travails of Covid-19 and social distancing have therefore left the dynamic former WBA junior welterweight frustrated but unruffled.

“This is my third time [dealing with something like this], so I wouldn’t say I’m used to it but I’m sorta prepared for it,” he told The Ring by telephone from his Los Angeles home.

“I did the Hurricane Katrina thing when I was in my teens, then during the Hurricane Harvey thing in Houston we were stuck with water rising and all that stuff and now this.

“So, this kind of thing isn’t brand new to me like it is for the rest of the world. I’ve done it before; I’ve been through it.

“It’s still frustrating – for everybody, not just for me or for boxing, the whole world is going through it right now, man. People can’t go to work, and I really feel for the people that live from pay-check to pay-check, I used to be one of those people. Boxing seems very small compared to what’s really going on with the world right now.” Prograis was last in action in October, dropping a tight, majority decision to Scotland’s Josh Taylor in the final of the World Boxing Super Series 140-pound tournament in London’s O2 arena – a titanic and intense battle, which was a standout Fight of the Year contender for 2019.

‘The Rougarou’ is adamant that he should have had his hand raised at the end of the bout, although he expresses these sentiments in his own typically laid-back fashion, rather than resorting to hyperbole or rancor.

“My feelings towards it are I thought I won, but it was a close fight,” he says, his words tumbling out in his characteristically charming Louisiana drawl. “I still feel I won the fight and I won’t ever retract my words.

“If it was here in America would I have got the nod? I don’t know. I can’t really say. My mindset has always been – if I can hit someone and hurt them and they can hit me but can’t hurt me then I’ve automatically won the fight. “I remember I hit him in the 12th round with a big left hand and he fell towards me and if I had just like stepped around him he probably would have just fell face first or something like that. Or he would have stumbled. I hit him with a few shots and really hurt him and I didn’t capitalize on that.

“But I loved that fight because I learned so much. I love to go at it, and I love to fight. I appreciate what that fight did for me and my career. It was a historic fight and hopefully one day we can do it again. I think I won, I didn’t dominate like I usually do, it was a close fight. The decision went the way it went but I definitely want a rematch 100 percent one day down the line.”

In a move typical of Prograis’ omnipresent desire to test himself against the best possible opponents he was due to face former WBO 140-pound titleholder Maurice Hooker on April 17 – a date that bit the dust once it became clear the Coronavirus wasn’t going away any time soon.

The event promoter, Matchroom USA, is looking to reschedule the bout for later in the year, and Prograis radiates confidence that, whenever and wherever the showdown takes place, he will prevail.

“To be honest I don’t think Hooker presents any sort of challenge to me,” is his blunt assessment. “I know that I’m faster, I’m stronger, I’m quicker, I have better defense, I’m more powerful just body wise. I just feel like I have every advantage over him – period. The Prograis-Hooker bout was pushed off its April 17 date. (Photo by Ed Mulholland/Matchroom Boxing USA)

Prograis seems more perturbed by some of the restrictions the Coronavirus has enforced upon him and his young family than he does the prospect of facing Hooker.

“Quarantine’s got me feeling a little down,” he sighs, with admirable honesty, “like I don’t want to do nothing.

“I don’t have like a regular schedule right now. I’ve been on my phone making crazy videos and stuff, training at night-time, playing ping pong, playing with my kids, trying to do some homework with my son whenever he feels like it – which is really never – and playing video games, Call of Duty.

“The kids are goin’ crazy. They’re running up and down the stairs all day long and fightin’. We’re just taking it day by day.”

However, for all the frustrations of daily existence right now, the message from Prograis to the rest of the junior welterweight division is one of clear and menacing intent.

“I want to fight the best. If you look at my last two or three years all I’ve been fighting is undefeated fighters, world champions or former world champions. That’s all my record has consisted of.

“I want the big fights. I want to prove myself. I’m still hungry for the belts at 140 right now and I want to be a two-time world champion.”