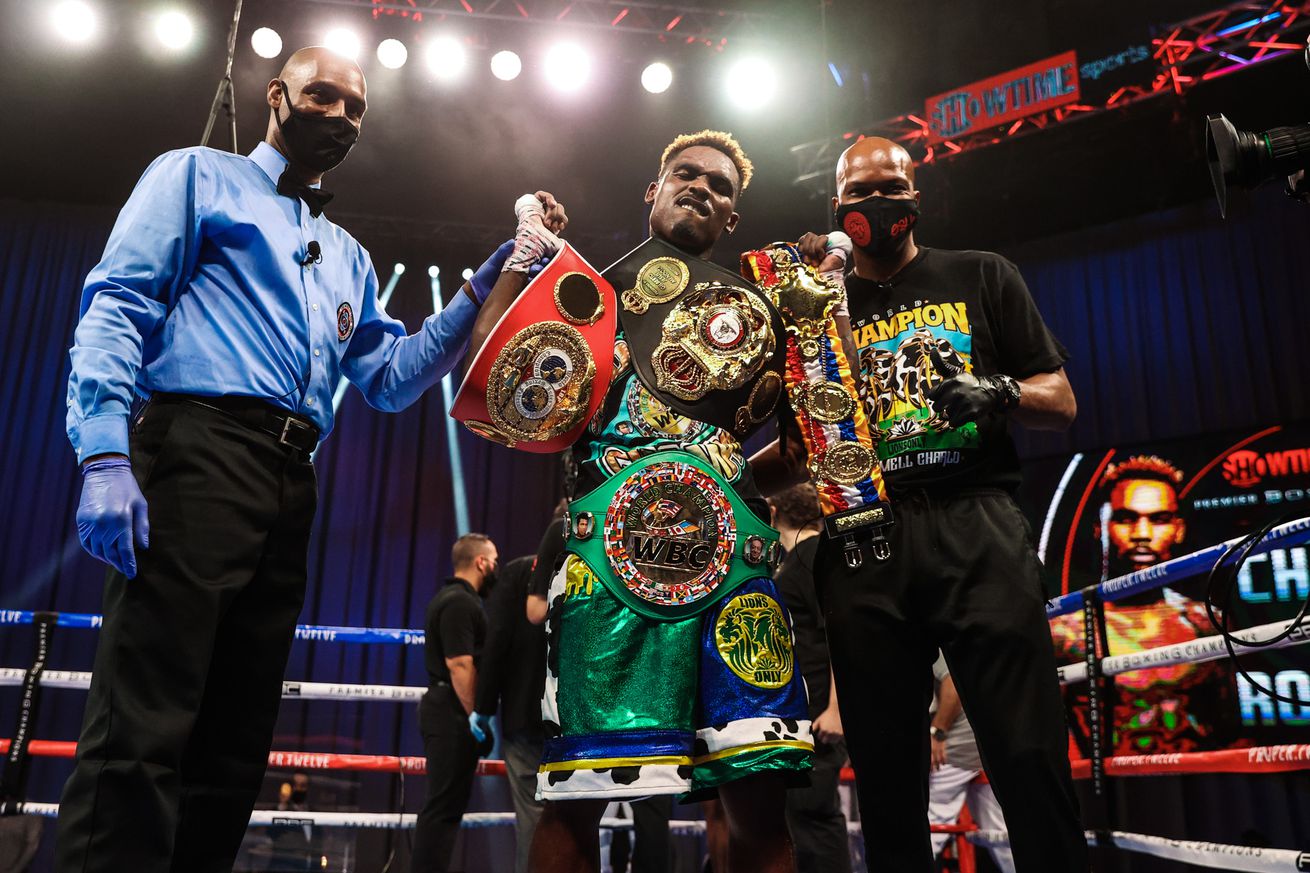 The Charlo twins and Mairis Briedis made the biggest statements of a crazy busy week in boxing.

After a hugely busy weekend with nine ranked fights, we’re back to something more normal.

Notes: Finally, it’s over and done with. After various postponements, delays, and whatever else, the World Boxing Super Series second season cruiserweight tournament ended, with Mairis Briedis scoring a clear win (no matter what one judge said) over Yuniel Dorticos, winning the IBF belt and cementing his place at No. 1. Dorticos drops a couple of spots to No. 4, but I still think he’d be a solid favorite over anyone below him here, save maybe for Okolie, if Okolie is going to wind up being the real deal.

There is some chatter that Dorticos may hang up the gloves, but we’ll get there if we get there. Considering Briedis’ lone loss is to Oleksandr Usyk, and he gave Usyk the toughest fight of his career to date, yeah, Briedis is a clear-cut No. 1 at the moment, even with some iffy performances between Usyk and Dorticos. Those performances do matter to remind us, however, that he’s certainly not unbeatable.

Notes: Everyone wanted to see if Jermall Charlo is a true top-tier middleweight. He is. Charlo scored a more than solid win over Sergiy Derevyanchenko, where really only a vast minority of people are going to argue that Derevyanchenko deserved the W this time, unlike the Jacobs and Golovkin fights where plenty of people felt he’d deserved to win but didn’t. This is not suddenly that Jermall Charlo is the unbeatable, infallible king of 160, but it’s very clear now that he is a top guy at 160, for real.

He also leapfrogs Demetrius Andrade, which is the move I was prepared to make if there was a clear winner either way for Charlo-Derevyanchenko, and it’s Charlo. Andrade just doesn’t have a win that compares to Charlo’s latest. Blame whatever you want for that, but it’s how it is, and you especially can’t be someone who had railed on Charlo’s record at 160 and still defend Andrade being over him, I don’t think, given that Andrade’s run at 160 has been Alantez Fox, Walter Kautondokwa, Artur Akavov, Maciej Sulecki, and Luke Keeler. I would love to see Andrade get a fight with a top contender or another titleholder, but he hasn’t. And his best bet to do so might actually be trying to become the fourth guy to beat Sergiy Derevyanchenko in a world title fight, but man that’d be kind of a stale story this time around, huh?

But from Nos. 2 through 6 of last week, following Charlo cracking Rosario out, THERE IS BASICALLY NOTHING SEPARATING ANY OF THESE GUYS RIGHT NOW. In this regard, I have done my best, and I will try to explain, at least in brief, my rationale for the new order, though I do not plan on having any drawn out debates about this because you can put these dudes in any order and I think you can make a case fine enough. I strongly considered, for the record, just leaving it the way it was, but I like to have a good time and occasionally overthink stuff.

This division is wild. There’s a sheriff in town now, but it’s still pretty lawless.

Notes: Do you understand how actually dull ThE beSt DiViSiOn In BoxInG is compared to 154, though?

Notes: Another fight on Saturday saw Josh Taylor knock the shit out of a guy who shouldn’t have been in the ring with him. I’ve clickety-clacked my fingertips on enough keys over that fight already. (You can’t really say “spilled enough ink” or whatever when you do a web site.)

Notes: Had a few fights with this division this past weekend. Daniel Roman got a close but not controversial win over Juan Carlos Payano, and Luis Nery came up from bantamweight to win the kinda-vacant (Rey Vargas is “champion-in-recess”) WBC title against Aaron Alameda. And we saw Brandon Figueroa ultimately wear out an over-matched Damien Vazquez.

Roman’s win wasn’t exactly stellar, but he’s also never been a DOMINANT! sort of guy. He closed the fight well and got the job done, and while I had it even, I also believe I should have had it 114-113 Roman, as Payano should have been ruled down at end of the 12th round.

Nery’s win also was not stellar, and I’m rather cautiously putting him in at No. 8 here. His upside is definitely a lot higher, but I also had his fight with Alameda, who was totally unproven, an even score. Listen, styles make fights, and Alameda, while he hadn’t fought anyone, had a solid amateur background, had fought in the World Series of Boxing in the past, and proved he can box a very effective, if quite basic fight. The feeling is Nery should have done more, but Nery wouldn’t be the first really good fighter to have a style struggle against someone like Alameda, either.

The other reason I’m giving Nery a cautious entry into this class is pretty simple: he’s been done enough favors and I don’t owe him any in my dumb rankings.

Figueroa-Vazquez went more or less like I expected. I like Brandon Figueroa and love to watch him fight, but if Nery has a sort of high ceiling at his current rating, I honestly think Figueroa’s is fairly low. This might really be as high as he’s getting, and it might be a tad generous. He walloped Vazquez, but Vazquez just isn’t that good. I think this is another division that has a lot of talent, and not at on separating most of it.

Notes: We had action here, too, as John Riel Casimero successfully defended his WBO belt against Duke Micah via third round stoppage that probably should’ve been second round stoppage. Man, did Micah come to fight, and man did he get his dome rattled.

Nery, who had been No. 2 for a good while, is out of the division finally, meaning we had an open spot to fill with last week’s 3-10 guys moving up a notch. I decided to go with Oscar Negrete, whose 0-1-2 record against Joshua Franco is looking better than before, and whose only other loss was a world title fight with Rey Vargas at 122 which he probably didn’t deserve but Rey Vargas allegedly had to fight someone on the Cotto-Ali undercard. (Remember when Sadam Ali beat Miguel Cotto? By decision? And deserved to?)

Negrete, in all honesty, is probably a placeholder. He’s a solid, fun fighter, but he’s also 33 and figures to give way to someone like Lee McGregor or the mighty new bantamweight Charlie Edwards soon enough.

Notes: Cristofer Rosales won a tune-up this week, the second he’s had recently. Honestly, after the top six guys or so, this division is really yearning for some new blood, which Nakatani and Magramo might provide. They’re supposed to fight for the vacant WBO at some point, with Tanaka planning to move up.