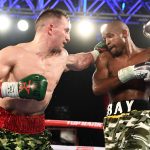 NEW YORK – Three days away from fight night and young guns, up ‘n comers, trial horses and some best of breed sat on a stage at Madison Square Garden and pondered their hopes and dreams of what could occur on Saturday at MSG’s big room.

The undercard press conference, which was presided over by Matchroom promoter Eddie Hearn, featured athletes on their best behavior. Katie Taylor, as per usual, was classy and humble, while her opponent, Delfine Persoon, offered that victory in this undisputed lightweight title fight would put boxing on the map in her native Belgium. Britain’s Callum Smith shared that he can’t get ahead of himself. He knows that he must handle vet Hassan N’Dam in their 168-pound tango before bigger stakes bouts come to him. And then there was Hearn himself, talking up 9-0 Josh Kelly, who is seeking to increase his hand and foot stamp beyond Britain. Tommy Coyle admitted that he didn’t think a fighter of his caliber would ever be allowed to participate on such a stage, while his opponent, Chris Algieri, noted that he’s still keen to make waves as a boxer, not cookbook author or nutrition expert….all of the assembled assessed the stakes and talked on near term hopes and dreams.

The Anthony Joshua-Andy Ruiz topped card will run on DAZN, and for sure, different fans will be more or less curious to see these players rise or fall.

One hitter who seeks to pull an upset, and serve notice that he is a comer in the welterweight class is Ray Robinson, the Philly fighter who impressed one and all in his last scrap. Robinson, 33, holds a 24-3-1 mark. On March 30, he battled Egidijus Kavaliauskasto a draw and, once again, he is in the same spot headed into Saturday. His opponent, the aforementioned Kelly, nicknamed “Pretty Boy” – Hearn joked how grossly handsome the lad is – is favorite. But I dove in deeper with Robinson, who debuted as a pro in 2006.

Ray spoke about the stakes of the Saturday faceoff: “My whole career I have been fighting Olympians and undefeated fighters that everyone always hypes up until I beat them. This fight is no different, only difference is I have been staying busy and getting better. June 1, I’m ready to show everyone at Madison Square Garden it’s my time. After this win, I hope it will finally prove to everyone I am ready to fight the best!”

And what is his take on Kelly, from watching video?

“Without giving anything away, after watching his fights, I’m just going to be the smarter fighter.”

I was curious, what does he see as his role coming to this bout?

“I’ve been fighting anyone they put in front of me on my way to get my shot at a world title.”

And yes, that fight with Kavaliaskas impressed many mightily. “I feel as though I simply beat him and made it a boxing match,” Robinson said.

His head coach is Bozy Ennis, who Robinson says is “the type of trainer that adds on to your game and is constantly teaching you something new.” Anyone else on Team Robinson? “Lawrence Smalls is quiet but great at what he does and can really pick a fighter apart. Jaron “Boots” Ennis is always working with me, sparring and keeping me sharp.”

He also furnished us an outside the ring lowdown. “My family has been really good. My girlfriend, Jaclyne, plays a big part. She’s basically a coach at home. She’s a fighter also, so we train together, eat good together, and are always pushing each other to be better. I have a son, Kingston, who will be two in September. He’s always in the gym with us and loves to box already, he definitely keeps me young. I have an 11-year-old daughter, Mya. She’s a big help with everything and is always there cheering me on. Life is good!”

And, big picture? “I feel like my career is going in the right direction,” Robinson said. “I have been staying busy and constantly getting better and learning. I feel the best I ever have in my career at this point. I feel as though I should be fighting the top guys, but my time will come when it’s right for me. God has a greater plan and one year from now I believe I will have a world title around my waist.” Moving on, some pundits are extremely high on Smith, The Ring and WBA super middleweight titleholder. You might want to give an extra measure of attention to him, as he is on the short list to fight Canelo Alvarez, providing he deals with N’Dam.

“He’s a good fighter,” Smith said of the challenger. “He has very good experience; a former world champion, but I believe I’m the best in the world. If that’s true, I’ll be able to beat Hassan, beat him well and look good doing it.”

Also, keep an eye on Joshua Buatsi, new to Team Everlast, age 26, and a stoppage machine (10-0, 8 KOs). He could be on the light heavy map, looking at meaningful tangoes, sooner rather than later. “I’ve prepared to go 10 rounds and if it goes the distance, cool,” said the talented prospect. “If I sense any vulnerabilities or opportunities there, I’ll take (the knockout). As always I want to entertain people.” For the record, his foe as of press time is the fearsome TBA.

And classy and quiet Katie Taylor, some think, is the best female fighter on this earth, pound for pound. “Delfine is a champion and this is exactly what boxing needs, the best versus the best. I expect the toughest challenge of my career,” the Irishwoman said. “We’re here to make history for our countries and it will be a very exciting fight.”

Readers, who are you most keen to check out on the AJ vs Ruiz undercard? Let us know, in the comments section.