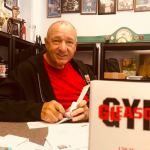 One hundred fifty people walked into Gleason’s Gym on Wednesday, starting at 5 AM ET and by 8 PM, the 14 or so hours he’d been through came off as a bit of a blur to the gym’s showrunner, Bruce Silverglade.

He paused when I asked him who exactly was the first person to enter the famed and fabled community beacon shortly after 5 AM, for the first time since the shop closed up on March 16, on orders of the Governor of New York, Andrew Cuomo.

“The first person in?” He paused two beats. “I don’t know, it was too exciting!”

I didn’t ask Silverglade, who partnered up with Ira Becker and then took over full time in the middle of the 1980s, if he feared that at the 11th hour he’d get word that the joint wasn’t allowed to throw open the doors. But yes, he admitted to me, anxiety tested him on Wednesday night, as he lay in bed, and pondered what a long and strange and at times shitty trip it’s been. The doors have been closed since March 16 to those seeking a workout, and the vibe of a club-house where people come to hit a bag, and restore their spirit and soul.

Mind you, Silverglade is a role model of positivity and right-minded focus for me. He’s helped me in trying to pay less attention to big picture matters that I have not a single strand of influence over. So, as March passed into April, May, June and July, with no word on when he could re-open, and stop the cash hemorrhage, he did a great job maintaining a base of serenity. Ah, but there were days when he felt so damned ineffectual. Why do “big sport” athletes get extra love from the Gov and boxers, from the ragged sides of the street, get dissed? Silverglade would ask that, talking to Reps. and senators and city council leaders…why are boxers being discriminated against?

Why’d no city pol give a hoot about a man with a long history of persevering through every NYC era. Someone who reps the sometimes rag-tag but equally majestic endeavor which utilizes combat to, counterintuitively, spur personal growth which is measured less by diametric growth of bicep but more so dynamic shift in character and resolve. And then he’d remember that lives were being lost…and business could wait a bit longer, though his landlord wouldn’t.

Serenity gave way to deep-to-the marrow gratitude on Sept. 2, because, finally, he was allowed by the state and city to let people do their thing in this sanctuary for pugilists and regular Joes and Janes seeking to enlargen their comfort zone.

“It was fabulous, a great day,” Silverglade told me. “Slow but steady the whole day. 150 people trained today.
I expect more tomorrow, and even more over the weekend.”

Props go out to the people at the local news channel, Channel 12, their crew met Bruce at the DUMBO gym at 4 AM, and they captured on video the mix of relief and joy the NYC native felt as the sun rose and his business came out of the dark spell.

“The responses from people were incredible,” he continued. “Everyone was just thrilled, people said ‘thanks for holding out,’ ‘thanks for your efforts.’ There were zero complaints, about wearing masks, or distancing.”

OK, but this IS Brooklyn, and boxing people we’re talking about, so it’s not like everybody hummed the national anthem all day, right?

“Yes, there were little comments about sparring not being allowed, but that didn’t last long. Totally, it was a good day!”

Doug Vannoni is a regular presence at the gym. The Brooklyn resident can often be found in the office with Silverglade, aiding the squad with his expertise on the tech side, web stuff and the like.

Vannoni is still welterweight trim as apparently his willpower stayed steady while most of us added a spare tire plus a backup spare to their mid-section, from stress eating.

“I was there and it was great being back,” Vannoni told RING. “Seeing the regulars and the trainers after so long was downright emotional at points – like when you see an old friend on the street. There was also an instant commiseration…“what the effing hell,” we all said. It makes you realize that Gleason’s is so much more than just a boxing gym, and at least to the lives of the Gleason’s gang, even more than a really famous boxing gym maybe. The vibe was still tentative and subdued, masks are hard to wear regularly and even harder while your heart is at 180 beats a minute. Most everyone, though, didn’t seem to let it bother them and all got what looked like good workouts!”

The state and city stipulate that this fitness center must not exceed 33% of capacity, so Silverglade has a sign up sheet on his website. People get online, and snag a slot, a 90 minute chunk of time. He requests they come 10 or 15 minutes before their slotted time, so they can get their temp taken, and fill out a questionnaire.

And, I was curious about this…What happens when a session is over? “Everyone leaves, we clean, and get set for the next shift,” he explained. Most of the trainers do one hour blocks, so it works out. People come, get dressed, do their workout, have some time to shower or just cool down, and then they exit. “Our numbers were steady all day,” he said.

And yes, I did poke a bit, about the anxiety Bruce referred to, how he had a hard time getting to sleep. In actuality, he didn’t fear a “bust,” or a clamp-down by a squad of inspectors. Here’s why–the Mayor, Bill deBlasio, laid out a construct for gyms.

The health department will be contacting all gyms, and will do inspections. First, a “virtual” one, probably via Facetime, and Bruce will give a tour of the facility, point out how all regulations are being followed. Then, an in person inspection will be done. Right now, deBlasio is allotting much of his daily doings on how to get kids back to school, and have it so teachers and parents and children are able to feel reasonably secure that necessary measures are being enacted so anxiety is lessened. May they all feel half the buzz Bruce had for his Sept. 2 re-open, they’ll all be OK.

Learn more about Michael Woods from his LinkedIn profile.

The post Re-opening Report: Gleason’s Gym back open for business appeared first on The Ring.