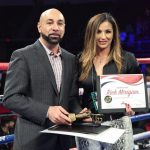 Before 2020, manager Rick Mirigian had one fighter. Granted, that one fighter was a special one, WBC/WBO junior welterweight titlist Jose Ramirez.

But it was just one.

Rodriguez won a bronze medal as a middleweight at the 2016 Olympics—and has over 500,000 Instagram followers.

“He was a rare Mexican Olympic medalist, and the last one in the past 25 years or so. I have special things both inside the ring and outside the ring that I pursue for him.”

Delgado is considered like an Edgar Berlanga or Vergil Ortiz Jr., a hidden gem many promoters know about.

“Delgado is that type of fighter, like Berlanga and Ortiz, and he’s been under the radar,” Mirigian said. “I think I’ve teamed up with him at the right time, and promotionally, we’ll look to build fights around him in California.

“You don’t find too many fighters with that power. He was a secret in the sport, known by its best. He will not be a secret anymore with my plans.”

Contreras is coming off a big victory back in June, unseating previously undefeated Rolando Vargas.

“Contreras is only 90 minutes away from my home in Fresno,” said Mirigian, who is co-managing Contreras with Gabriel Flores Sr. “He’s also a free agent, and he proved himself on the world stage a few months ago, upsetting a very good fighter.

“Coach Flores has one of the best eyes out there for young talent. I plan on featuring Contreras on fights in the Fresno area, and he impressed many people in the boxing world, me included. When COVID-19 lifts, he’ll be a great addition to the Fresno area.”