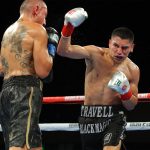 Everyone in the boxing world wanted him. Rick Mirigian and MTK Global got him.

Mirigian, the California-based manager, and MTK Global, the British-based promotional and management giant, announced that they have signed rising welterweight star Vergil Ortiz Jr. to a five-year deal.

“I always thought Vergil had real boxing talent and is a real superstar,” Mirigian said. “I felt that there is something I can do here to help him. I asked for the opportunity to speak with him, and I felt I could strengthen his brand and I know I can create a number of different things.

“I always felt Vergil was shortchanged. The goal is move him and everyone was after the kid. There is no secret about that. Everyone who is anyone was after him. The kid is incredibly talented. I always believe that the fighter is first.”

Mirigian said he would like to get Ortiz Jr. three fights in 2021. He sees the potential growth for Ortiz Jr., who’s based in Grand Prairie, Texas, to build his profile.

“Vergil is in a division that’s full of talent and he has the kind of style that make great fights,” Mirigian said. “My goal is to get him a major fight at AT&T Stadium, where the Dallas Cowboys play. Vergil lives only 10 minutes away, and I can see great things happening for him.”

Ortiz is ranked No. 2 by the WBO and No. 5 by the WBC. He’s won each of his 16 fights by knockout, including wins over the likes of Samuel Vargas, Brad Solomon, Antonio Orozco and Mauricio Herrera.

“We are proud to be partnering with Rick Mirigian to work with the incredible Vergil Ortiz Jr.,” MTK Global CEO Bob Yalen said. “Rick is one of the leading boxing figures in the US, and what he’s managed to achieve in the sport shows that he’s guaranteed to be a valued strategic partner for MTK Global.

“Ortiz has had a sensational career so far and he’s destined to become a world champion, so we’re extremely excited to now be working with this superstar.”

The Ortiz Jr. signing is another example in MTK Global’s continued expansion into the U.S., after signing world champions Jamel Herring and JoJo Diaz, and rising stars Lorenzo Simpson and Jonathan Lopez earlier in the year.

“I’m very excited to sign with MTK as an advisement group with manager Rick Mirigian, who also happens to be the manager of my favorite boxer Jose Ramirez,” Ortiz Jr. said. “I’ve heard great things about Rick and MTK and I’m looking forward to the future.”