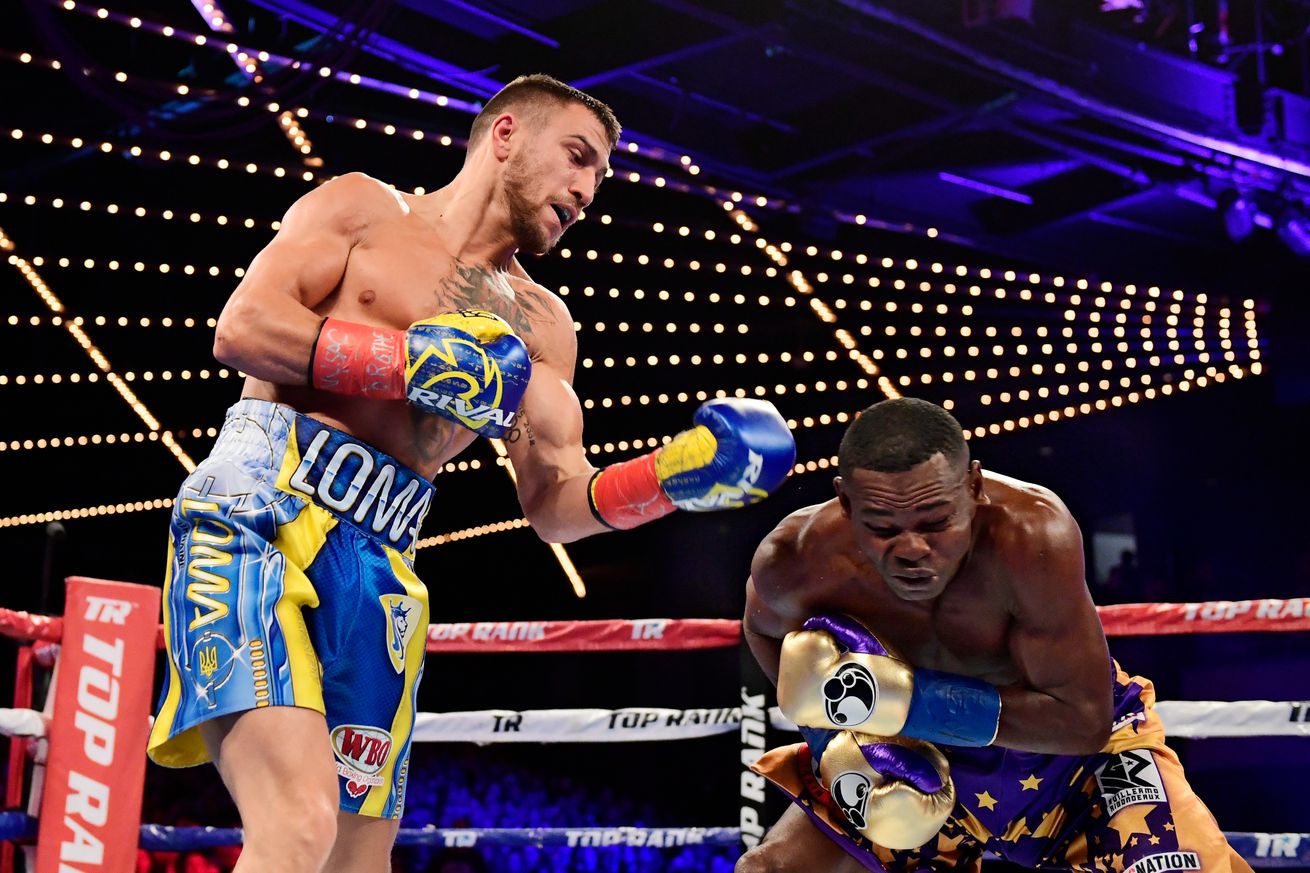 A bitter winter’s evening turned to bitter disappointment inside the Garden, as an Englishman in New York recalls.

“Ey, Luis,” I just about made out through a troubled, distant-sounding line, as Rigondeaux eye-balled me on video chat. I was en route to New York for the WBO junior lightweight world title fight between Vasiliy Lomachenko and Guillermo Rigondeaux, trying to mash together the remaining puzzle pieces of an interview I was conducting with “El Chacal.”

It wasn’t going well. Rigondeaux’s English is extremely limited and my Spanish stretches to “uno cerveza” and, with thanks to “Narcos” and years of La Liga viewing, “puta.” I wasn’t sure either were conducive to probing for enlightening answers, despite the relative obscurity of the web site I was filing for.

I’d made contact through a fixer running a Cuban boxing account on Twitter. Granted, I’m pretty fresh in this aging sport – even more so in late-2017 – but getting such relaxed access to a former two-time Olympic gold medalist, and headliner at the event I was making a London to New York pilgrimage for, felt a privilege.

We hung up and decided to stick to messaging through Whatsapp. He’d type through his interpreter as I rallied off questions concerning the coming weekend, with the odd nugget protruding from the usual pre-fight hymn sheet that fighters frequently hide behind.

Cuban fighters have a history of elusiveness inside and outside of the ring, but at this moment, Rigo was willing to trade. He appeared obligated to sell himself, rather than the upcoming duel with Lomachenko, with his guard dropping, fueled by a desire to create a headline.

Nicholas Walters, Nonito Donaire, Carl Frampton, Scott Quigg, Leo Santa Cruz; no fighter was safe from the tirade that Rigo embarked upon as he struggled to find more than two synonyms for the word “coward” to attribute to each. It was as if Rigo was so preoccupied with stoking fires for future contests, that the daunting prospect of fighting Lomachenko in the unfamiliar 130-pound waters was all but a footnote.

This was at the time where his Twitter account was doing overtime. It clearly wasn’t Guillermo behind the activity. Still, his team were probably under the instruction to voice his opinion on every topic in boxing with homemade memes making up the best of the content. Despite their best efforts, the #Rigolution didn’t entirely take off.

I’d finished my piece by the time my girlfriend and I had left Reykjavík, using valuable airport hours to hammer away in a cathartic trance. We’d stopped off in Iceland for a couple of days to utilise the jump across the Atlantic, and as we skidded onto the runway at J.F.K., it was almost as if we never left.

New York was covered in a sheet of unmarked snow. A late, long, overpriced taxi allowed us to soak in the sights, as the LED-lit city reflected off the white sidewalks peacefully. The Notorious B.I.G.’s Juicy accompanied a slither of our journey, as our driver rapped along in a sort of “Welcome to New York” rite of passage. A ‘Big Apple’ air-freshener dangled from his mirror, proudly swinging as we raced towards Williamsburg. I joked it was the equivalent of us ramming scones and pouring tea down his neck in a patriotic show of goodwill if we were to collect him from London Heathrow.

We checked into our hotel and spent the next couple of days ticking off the tourist trail of must-dos, must-eats and must-take-a-pointless-picture-of, but Saturday’s fight was never far from my mind. It would soon appear that I was almost alone in that respect.

Of all the fights I’ve attended, this one really intrigued me. The marketing mainly focused around Rigondeaux’s, and Lomachenko’s astonishing combined amateur records, with 14 losses coming in their 872 unpaid contests. “This is one of the purest boxing matches ever staged,” was where the narrative settled, as two, two-time Olympic gold medalists went toe-to-toe for the first time. It was a hard sell to the casual boxing fan, with friends struggling to pronounce any of the four names of the two fighters involved. That made it feel even more special, in a glib sense.

We arrived early to soak up the atmosphere at Molly Wee Pub and Restaurant, a stone’s throw away from the Garden. The atmosphere, it turned out, was that of a Santa Pub Crawl with forty pissed Santa Claus’ necking bottles of Blue Moon in the quickest time possible. Don’t get me wrong; I wasn’t expecting herds of Ukrainians and droves of Cubans to be congregating en masse debating the footwork, punching power, ring I.Q. and chins of both fighters. Still, I thought there would be a slight indication that there was a fight about to take place around the corner. Nothing, nada, нічого.

Forty Santas dissipated into a handful, as the remaining few made their exits along with us into the bitter cold New York evening. We skated cautiously towards the Garden, buoyed by hot toddies and adrenaline utilised to stave off jet lag. We queued for a beer half the price of the ticket and were left disappointed by the lack of merchandise to throw money at.

We took our seats in The Theater and watched the drama unfold. Shakur Stevenson, Michael Conlan, Bryant Jennings and Christopher Diaz all recorded victories on the undercard. The wait was over, but then, the fight was over.

There was utter confusion surrounding us when Rigo decided enough was enough. Lomachenko had systematically beaten down the Cuban, with the challenger seeing no way through the Matrix, and making a minimal attempt to forge one. I tried to explain this decision to my bemused girlfriend. She’d been promised fireworks but witnessed a dud.

“Maybe I change my second name, maybe I change it to No Mas Chenko,” Vasiliy quipped with the WBO strap draped over his shoulder. The boos were still ringing inside the Garden as we filed out. We’d witnessed one of the very best putting on a clinic, but there was an unavoidable stench in the air as I began questioning Rigondeaux’s intentions that weekend.

He’d promised an interview following the fight, but I was under no illusions that this would materialise. The ink was drying on an evening where one of the very best to lace them up was reduced to spoiling tactics and an eventual quit. It was hard to admit. I’ve always had Rigondeaux’s back over the years, but it felt like he’d sold out. Rumblings of a fractured hand did very little to sway me from this opinion.

Rigondeaux went missing for the 12 months that followed, returning to beat Giovanni Delgado at the start of 2019. A war with Julio Ceja and a bore with Liborio Solís followed, with the 39-year-old now looking for another huge test in the monstrous shape of Japan’s Naoya Inoue.

Two-and-a-half years have passed since that evening, enough time to reflect on the bigger picture of Guillermo Rigondeax. In A Cuban Boxer’s Journey: Guillermo Rigondeaux, from Castro’s Traitor to American Champion by Brin-Jonathan Butler, Rigondeaux’s face was described as “the saddest face I had seen in Cuba in my time there,” by Butler, as he travelled to the Rafael Trejo Gym, Havana in 2007. He would go on to note that it became “even sadder when he came to America and won a world title.”

Rigo has been ostracised and underappreciated throughout his life. Throughout his amateur career, he was all but a pawn on Fidel Castro’s political chessboard. No pain suffered by “El Chacal” in the ring could amount to what he has been forced to endure outside the ropes, labelled as a money-grabbing traitor after defecting to America in 2009. His distressing journey from Cuba to Miami, via Mexico City, is one that he often offers limited detail on, hinting at heartache and complexities.

Another career-high payday beckons if he’s to secure the Inoue fight over the next 18 months and I’m willing to invest, once again, in the inexplicable aura that enwreathes Rigondeaux when he fights.

Butler also details the time he asked Rigondeaux about his gold teeth. “Oh, you know, I melted down both my gold medals into my mouth.” Perhaps, towards the back-end of his career, we’ll see him smile so we can decide for ourselves.