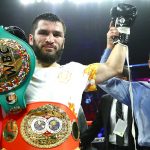 The Ring Ratings Panel didn’t have to debate about where to rank Artur Beterbiev among light heavyweights following his brutally impressive 10th-round stoppage of Oleksandr Gvozdyk last Friday. The IBF beltholder unseated the consensus top dog in the 175-pound division in Top Rank/ESPN main event, which earned him the WBC title and “lineal champion” status.

Panelists were unanimous in advancing Beterbiev (15-0, 15 KOs) from No. 4 to No. 1, but two that were ringside for the Russian’s breakout performance in Philadelphia, suggested a spot for the Montreal-based Chechen in the mythical rankings.

“I think I’d put Beterbiev No. 8 or No. 9 in the pound-for-pound rankings,” said Panelist Tris Dixon. “I was impressed and have been impressed.”

So was Panelist Adam Abramowitz: “Good shout. I’d bring him in at No. 9.”

Panelist Anson Wainwright wasn’t on board with the thinking of the two members that sat on press row of Beterbiev-Gvozdyk.

“Not for me,” he said. “Excellent win, I personally had him behind at entering the ninth. He did come on like a train and was highly impressive, but I prefer Mikey (Garcia) and (Manny) Pacquiao’s body of work as deciding factors. I would, however, have him next in. Beterbiev left me excited about seeing him fight next time.”

“I see where you’re coming from, but I don’t think the majority had him behind and there was still always an air of inevitability that he was going to catch up with Gvozdyk, sitting there,” he said.

“Beterbiev’s Gvozdyk win is far superior to anything that Mikey Garcia has,” he said. “Garcia jumps a lot of divisions, but doesn’t really fight or face top fighters. And how the fight was going is irrelevant to me. If he was down 5-4 (in rounds going into the 10th), so what? He won by a definitive knockout, which left no doubt about supremacy.”

Panelist Martin Mulcahey was in line with Wainwright.

“I’d hold off on Beterbiev (in the pound for pound rankings) for now, I am an early adopter of his, but Garcia and Pacman showed they can pull off equally impressive victories. If Beterbiev beats another top five lightweight, given the strength of division, then I would argue for his inclusion over Garcia first.”

Abramowitz wasn’t going allow the debate to end on Mulcahey’s note and the newer panelist issued a challenge to the senior member.

“So, Marty, what was the comparable victory for Mikey?” he asked. “You already said that (Sergei) Lipinets in your estimation is one dimensional (in your junior welterweight summary). I just don’t see the same level of opponent and definitive type or result in Mikey’s career.”

Mulcahey retorted in defense of Mikey.

“Taking the whole package into account with Garcia, not like Gvodzyk (Beterbiev’s best win), he beat a roll call of champions, and before Spence no one came to close to Garcia on the scorecards or in any other area,” he said.

“Garcia moved around in weight but it was not like he was avoiding anyone, he was in fact looking for best opposition in my opinion. Not much between them, no big argument if (Beterbiev) gets in top 10. I picked Beterbiev to win and always appreciated his positives, I just prefer Garica’s skillset at this time. As I said, if Beterbiev beats anyone else in the light heavyweight top five, he displaces Garcia. Yes, Beterbiev is on rise while Garcia may have plateaued, but overall, I think Garcia still the better of duo in P4P hypotheticals.”

Dixon noted that if Beterbiev entered the rankings at No. 10, he would displace Pacquiao, not Garcia, who was at No. 9. He preferred to keep the Filipino icon in over the Mexican-American standout.

“Loving this!” Dixon said of the debate. “I still say Beterbiev, but I respect the Garcia case. I just think his career is also going in a very different trajectory and we probably have seen the best of him.

“Looking at the rankings, I would actually make Garcia more expendable than Manny.”

“I agree with Garcia out over Manny, on recent results, and Beterbiev a good shout but I don’t want to get carried away by the moment either. Heck, I can see argument Donnie Nietes over both. Good to have these problems.

“Also, let’s not forget that Garcia is still younger than Beterbiev, there’s still time for both to give an argument in coming years.” “For me, Beterbiev entered the pound-for-pound top 10 on Saturday,” he said. “He took a fellow unbeaten titleholder at the top of his game, broke him up and took him out. I’ve seen various attempts to minimize the quality of the performance because Gvozdyk was ahead on (two of the judges’) cards, but that’s asinine reasoning. It’s a 12-round fight and Beterbiev was inflicting serious damage from the get-go. He knew what he was doing, and the scorecards were rendered meaningless.

“I was never in favor of Pacquiao re-entering the pound-for-pound top 10. He’s an all-time great, but I don’t think he’s one of the top 10 best fighters in the world ‘today.’ I’ll be in the minority there and I accept that, so I guess we need to review Garcia’s standing. Garcia has a better resume and a better skill set, but the Lipinets and (Robert) Easter victories feel like a lifetime ago. I would move Mikey out and put Beterbiev into the No. 9 slot. Either way, Beterbiev should be on this list.”

Panelist Michael Montero put a cap on the healthy debate:

“Good stuff everyone. I agree with Anson that Gvozdyk was up 5-3 going into that 9th round but then Beterbiev hit another gear,” he said. “I also agree with Adam that the win over Gvozdyk (who was undefeated, lineal/WBC champ, Olympic medalist) is better than anything Mikey Garcia (a weight-jumping opportunist) has ever done.

“Artur Beterbiev is not the prettiest fighter in terms of aesthetics, but that relentless pressure and iron will are definitely pound for pound. Add my vote to Beterbiev entering at No. 9, keeping Pacquiao at No. 10, and Garcia (who will lose to Pac next spring) exiting.”

Pound for pound – Beterbiev enters the rankings at No. 9, displaces Mikey Garcia. Manny Pacquiao remains at No. 10.

Light heavyweight – Beterbiev advances to No. 1. Oleksandr Gvozdyk drops to No. 3.

Welterweight – Kudratillo Abdukakhorov, who scored a technical decision over veteran former titleholder Luis Collazo on the Beterbiev-Gvozdyk undercard, advances one spot, from No. 10 to No. 9.

On Saturday, in London, 140-pound titleholders Regis Prograis and Josh Taylor, The Ring’s Nos. 1- and 2-rated junior welterweights, will vie for the vacant Ring Magazine championship in the World Boxing Super Series tournament final, which will be broadcast on DAZN (in the U.S.) and on Sky Box Office (in the U.K.)

On Thursday, November 7, in Saitama, Japan, Naoya Inoue will defend his Ring Magazine bantamweight and IBF titles against WBA beltholder Nonito Donaire in the WBSS tournament final. The bantamweight championship bout will headline a DAZN broadcast.