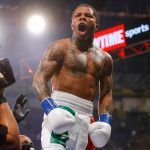 Halloween weekend was one of the busiest of the year. On Friday, October 30, former 154-pound beltholder Jaime Munguia made a case for himself as a middleweight player with a victory over battle-tested gatekeeper Tureano Johnson, who had to withdraw from the fight after six competitive rounds due to a gruesome lip tear that was a result of a well-placed uppercut from the 24-year-old Mexican upstart. Munguia (36-0, 29 KOs) no longer has the decided edge in size and brute strength that he put to use at junior middleweight, but he exhibited enough skill and technique in dealing with Johnson’s pressure to merit a No. 10 ranking at middleweight.

The boxing bonanza on Saturday, October 31, began with another unbeaten former champ, Aleksandr Usyk, looking to prove himself in a heavier weight class by taking on the grittiest gatekeeper in the division, Derek Chisora. The former Ring Magazine/undisputed cruiserweight champ outpointed the heavyweight pressure fighter over 12 competitive rounds but not without some rough and uncomfortable moments.

Usyk (18-0, 13 KOs) boxed well enough against Chisora to hold his No. 4 place in the pound-for-pound rankings but didn’t dominate enough against the British veteran to crack the heavyweight rankings.

“I thought (Usyk) won everything after the first three rounds,” noted panelist Anson Wainwright. “Say what you want but it’s going to take a top guy to beat him. He’s probably our next guy in (the heavyweight rankings).”

“If Usyk had stopped Del or been ‘a little’ more convincing, then I could justify his inclusion. I had the fight 116-112, so it was a lot more competitive than I expected. I still think Usyk will have success at heavyweight, but he’s in the 11-15 range right now.” “Agreed that Usyk isn’t in the top 10 quite yet,” said Montero. “Several currently ranked heavyweights have fights coming up and that could change things. For example, if (No. 10 Kubrat) Pulev gets blown out by (No. 1 Anthony) Joshua, that could be how the former cruiserweight champ jumps in.”

Martin Mulcahey was the lone panelist suggesting that Usyk be ranked at heavyweight.

“Aleksandr Usyk easily beat Michael Hunter (who we have ranked No. 8 at heavyweight, yes at cruiserweight but it counts in my opinion) head-to-head and would best small heavyweight (No. 9 Oscar) Rivas in my opinion. I would bring him in at No. 8 and move others down. Pulev will be out after next fight anyhow, so can wait until then if we must.”

Usyk’s fellow pound-for-pounder Nayoa Inoue held his lofty No. 2 spot in the mythical rankings with his second defense of the Ring Magazine bantamweight championship against No. 6-rated Jason Moloney. Inoue (20-0, 17 KOs) halted the rugged former title challenger in the seventh round, retaining his WBA and IBF belts in his Las Vegas debut.

And in a fitting finale to a boxing-loaded day, Gervonta Davis returned to the 130-pound division to battle it out with four-division titleholder Leo Santa Cruz in San Antonio. Davis (24-0, 23 KOs) was pushed by the valiant effort of Santa Cruz, the defending WBA beltholder, but the 25-year-old Baltimore native’s greater speed and reflexes began to take over the fight by the fifth round. In Round 6, the vaunted power of “Tank” found its mark with an explosive uppercut that instantly turned Santa Cruz’s lights out. The sensational stoppage is a strong candidate for KO of the Year and prompted Associate Editor Tom Gray to suggest that the southpaw boxer-puncher enter the pound-for-pound rankings.

Gray’s suggestion was rejected by most of the Ratings Panel, which led to a long debate that resulted in a slight recalibration of the last two spots of the pound-for-pound top 10 (the details of which will be addressed in a separate article to be posted soon), but there was no arguing that Davis, who exited the 130-pound rankings when he abdicated his WBA strap to fight Yuriorkis Gamboa at lightweight last year, is among the best junior lightweights in the world.

Panel members suggested re-entering Davis somewhere between Nos. 2 and 4. The majority wanted him at No. 2, so that’s where he’s landed.

Pound for pound – Naoya Inoue remains at No. 2. Aleksandr Usyk remains at No. 4. Josh Taylor enters at No. 9 (see Gray’s article on the mythical rankings for details).

“A lot of people feel that Munguia was being seriously tested, but it was the uppercut that caused the injury,” said Gray. “I think Munguia could replace (No. 10 Janibek) Alimkhanuly at No. 10. (Gary) O’Sullivan and Johnson back-to-back more than match what he’s done so far.

Junior welterweight – Regis Prograis (25-1, 21 KOs) remains at No. 2 after dispatching Juan Heraldez in three rounds. Mario Barrios advances one spot to No. 7 after stopping Ryan Karl in five rounds.

Lightweight – George Kambosos Jr. (19-0, 10 KOs) enters rankings at No. 9 after scoring a split-decision over Lee Selby.

Some members of the Panel thought Selby deserved the nod.

“Personally, I thought Selby won, neither guy greatly impressed me, I’d like to see more before I would say consider a top 10 spot,” said Wainwright. “Isaac Cruz was very impressive drilling poor Diego Magdaleno in a round and is on the fringes of the top 10 and probably jumps over Kambosos on the basis of this excellent performance.”

“I disagree with Anson here. I thought Sky (commentators) were off the mark with their scoring, but my impression was that Kambosos earned that victory in the championship rounds. I was very impressed with him, particularly because Selby’s style is so difficult to look good against. I could see Kambosos enter at No. 9. Cruz blasting out Magdaleno is eye-catching but was this right time-right place? No issue with him being behind Kambosos, but I was more impressed with the Aussie’s win because, for me, Selby was in a better place than Magdaleno coming in.”

“Like Anson, I thought Selby won, but I don’t think Kambosos winning was an unjust outcome. I agree with Tom to bring him in at No. 9.”

“Kambosos and Cruz both deserve consideration in place of (No. 10 Rances) Barthelemy. I know many people who felt Selby edged Kambosos, so perhaps we should put Cruz in at No. 10, he’s got two quality wins in 2020.”

“Saw replay (after I knew the outcome) of Selby-Kambosos, guess we should honor the judges who do have best seat in house, but I leaned towards Selby in that fight. Was not an enticing bout and neither deserved top 10 off that performance. I fear for Diego Magdaleno if he keeps boxing, but Isaac Cruz opened a lot of eyes with that kayo. Lightweight has gone from one of weakest to strongest divisions fast, so would hold off on bringing Cruz in for now.”

“Gervonta Davis wrecked Leo Santa Cruz with a left uppercut from hell,” said Wainwright. “Davis has to come into the rankings. I’d have him at No. 2. He has a bogus belt at 135 and I know we do rank in rare occasions fighters in two weight classes. He weighed in 130 so let’s just rank him at 130 for now. He certainly left me looking forward to seeing him fight next time. Lamont Roach stopped Neil John Tabanao in three rounds to stay in the title hunt. (He’s) just outside the top 10 in a strong division.” “I thought Davis was excellent and that was career-best performance. I will not take anything away from him and he deserves full praise. I agree with Anson, it was a brilliant victory and No. 2 sounds right to me. I’d like to know what Berchelt’s plans are going forward. Is he staying at 130?” [Editor’s Note: Berchelt’s WBC 130-pound defense vs. Oscar Valdez was recently postponed due to his testing positive for COVID-19.]

“Gervonta Davis showed his class, and if he can stay at weight is a wrecking ball with his physique and speed. I’d have him at No. 4, since he did beat a smaller man.”

Flyweight – Andrew Selby, who recently announced his retirement, drops from the rankings. Angel Acosta (21-2, 21 KOs) enters at No. 10.