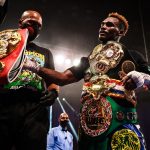 In Connecticut, in the final bout of September 26 (actually, September 27 for East Coast and UK fans), Jermell Charlo won the vacant junior middleweight title and unified the WBC, WBA and IBF 154-pound titles with an eighth-round body jab KO of Jeison Rosario. All three Ring champs are elite boxers, but Charlo’s accomplishments over his 12-year pro career prompted one member of the Ring Ratings Panel to suggest his inclusion in the magazine’s pound-for-pound rankings.

“I would like to bring Jermell Charlo in at No. 9, pound for pound,” said panelist Adam Abramowitz. “(He’s a) three-belt world champion, (his) dubious loss (to Tony Harrison) was avenged with a knockout. (He’s) faced much better competition than (current No. 9-rated Artur) Beterbiev. I think he’s clearly one of the 10 best in the sport.

“And like Beterbiev, he won all his current belts by knockout. No debate on his victories.”

Associate Editor Tom Gray agreed that Charlo is an exceptional talent and competitor, but firmly believes (and it’s not just Scottish pride) that if any unified champion deserves to crack the top 10 of Ring’s mythical rankings, it’s Taylor.

“Hey Adam, I’m not far away from (charlo being rated), but if Josh Taylor didn’t hit the top 10 pound-for-pound, then I can’t justify Jermell coming in.

Never one to back down from a ratings debate, Abramowitz replied: “The one difference between Charlo and Taylor in my mind is that there was no debate in his title winning victories. I thought Taylor beat Prograis, but certainly not everyone did. He was a small step above. No debate with Charlo’s wins to get titles.”

Gray, who’s not known for backing down from heated discourse, retorted: “Sounds good, but caliber of opposition needs to be factored in here. Should you be penalized for scoring a close points win over a terrific unbeaten world champion because someone else stops a fighter who isn’t as good? I don’t know many people who rated Rosario higher than Prograis pre-Taylor, unless they’re using 20:20 hindsight.

“There might be debate there, but not for me.”

Gray: “Rosario was great against Williams, but he also had a standout stoppage loss to (Nathaniel) Gallimore and a six-round draw to a complete unknown.

“Prograis was tipped for stardom, and he blasted out Relikh in a way that no one ever had.”

Abramowitz: “Tipped for stardom doesn’t mean much to me. You beat who you beat. Hype doesn’t factor into it for me. I don’t know a single person who thought Relikh would win that one. He was a beltholder, a placeholder, who beat an indifferent (Rances) Barthelemy to win his belt. Not much there for me.

Gray: “Yeah, the reason you don’t know anyone who picked Relikh is because Prograis was that good. It took Taylor to beat Prograis. “We can play bat and ball all day and we’ll probably never agree. Taylor is unbeaten and took out (Viktor) Postol, (Ryan) Martin, (Ivan) Baranchyk and Prograis in consecutive fights. Not only is his recent run better than Jermell’s, it’s better than most fighters in world boxing. It’s even better than Beterbiev’s, and he made into the top 10.

“For me, there’s absolutely no argument, but we’ll see what the guys say.”

Said Morilla: “I still regret being the one vote that broke the tie to keep Taylor out of our top 10 pound-for-pound back in the day. I agree with Tom here, his last five opponents are much better than Charlo’s last five (or more).”

Said Wainwright: “I still stick with Beterbiev overall. His win over (Oleksandr) Gvozdyk was terrific, a clear and pound-for-pound type win.

“Both Tom and Adam make good points. Personally, I don’t even think Jermell is the best twin, I prefer Jermall. I get Jermell is the man at 154 pounds and Jermall is one of the guys at 160, but Jermall is behind other pound-for-pound top guys, Canelo and GGG.”

Cruiserweight – Mairis Briedis is elevated to champion. Yuniel Dorticos assumes the No. 1 spot. Michal Cieslak enters at No. 10

Middleweight – Jermall Charlo advances to No. 2. Sergiy Derevyanchenko remains at No. 4.

“Really good performance, did better against Derevyanchenko than Jacobs and GGG,” said Wainwright. “Excellent win for Jermall Charlo, an aging Sergey Derevyanchenko will push anyone at the weight,” agreed Mulcahey. “Move Charlo above (Demetrius) Andrade, and I can even see a move above Gennadiy Golovkin given (Charlo) handled Derevy easier than GGG in my opinion. I still value GGG’s overall record more though, but it is getting close because of age factor.”

Added Montero: “Jermall Charlo did great against Derevyanchenko, but we shouldn’t lose sight of the fact that the Ukrainian had been softened up by 36 hard rounds against Jacobs, Culcay and especially Golovkin.

“I really think the GGG fight aged him; he took tremendous punishment last October. That being said, he’s still clearly a top 10 middleweight and tough as nails.

“No way in hell Charlo rates above GGG for beating a bunch of guys outside the top 10 (some outside the top 20) and then decisioning a softened up Derevyanchenko, whom he dwarfed in the ring. But we should definitely put him at No. 2 above (Demetrius) Andrade.”

Junior middleweight – Jermell Charlo is elevated to champion. Jeison Rosario drops to No. 3. (But Jarrett Hurd assumes the No. 1 spot, while Julian Williams falls back to No. 4.) Tim Tszyu enters at No. 10.

“Tough to work out the order after Charlo with several fighters winning and losing against each other. Obviously, Rosario has to drop and having beaten Williams in definitive fashion in January he has to stay above J-Rock,” said Wainwright. “So, have come up with this:

Wainwright was impressed by Luis Nery’s unanimous decision over Aaron Alameda (25-1, 13 KOs) and suggested the former bantamweight champ (31-0, 24 KOs) enter the 122-pound ratings at No. 4.

“I could see Nery a bit lower, in the 4-6 range, but others have shown some limitations and feel Nery to be above (Brandon) Figueroa and (Ryosuke) Iwasa.”

The Panel did not agree at all with Wainwright’s suggestion (with the exception of Mulcahey). Abramowitz led the charge. “I wouldn’t bring Nery in the rankings at all,” he said. “He has fought in the division once, against an unranked guy, and didn’t look particularly good. Why does he deserve to be ahead of Stephen Fulton, our No. 10, who has a solid body of work in the division, let alone at No. 4 or No. 5?

“I have made this point before and I will make it again. What someone does in one division has no bearing on where he is ranked in another division. Pound-for-pound rankings is where other divisional history is considered, not the divisional rankings. Nery needs to establish a legitimate body of work at 122 pounds like any other fighter before he should enter the rankings.”

Added Montero: “Agree with Adam that we shouldn’t rate Nery at 122 just yet. We didn’t rate Gervonta Davis at 135 pounds after beating Gamboa in Atlanta.”

Added Gray: “Yeah, I’d leave Nery out for now. Davis wasn’t rated after picking up a belt and neither was Ricky Burns when he grabbed a title at 140. Need to stay consistent.”

Wainwright: “I get the reasons for leaving Nery out at 122, the Gervonta, Burns examples, but I feel Nery is top 10 worthy. Alameda was a pretty solid guy who was in and around the 11-15 range. Better than the current version of Yuriorkis Gamboa and undeserving Michelle Di Rocco. Both of those were WBA secondary titles, this was the WBC title. Can’t see how Nery isn’t top 10. All opinions respected and we shall see how he goes from here. Wainwright suggested moving Casimero up one place to No. 2, but did not receive support from the Panel.

“I’d keep Casimero where he is at 118,” said Abramowitz. “I think (Nordine) Oubaali has the better body of work in the division.”

Flyweight – Cristofer Rosales remains at No. 9. Charlie Edwards exits to campaign at junior bantamweight. Jay Harris enters at No. 10.

Mulcahey suggested brining in Jesse Rodriguez instead of Harris, but Wainwright reported that he had recently spoken to Rodriguez, who confirmed that he is campaigning at junior flyweight (108 pounds) for now.