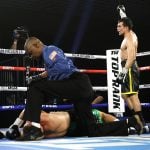 Several elite-level matchups have been scheduled for the final three months of 2020 – including two Ring Magazine championships this month (Vasiliy Lomachenko vs. Teofimo Lopez on October 17 and Naoya Inoue vs. Jason Moloney on October 31) and the November 21 welterweight clash between Errol spence and Danny Garcia – but it’s safe to say that the upcoming showdowns will not match the breathtaking action and drama that Jose Zepeda and Ivan Baranchyk delivered on October 3. As far as hardcore fans are concerned, Zepeda’s chilling up-from-the-canvas fifth-round stoppage of Baranchyk is hands down the Fight of the Year and KO of the Year. Zepeda survived being dropped twice in the opening frame, they traded knockdowns in Round 2, Baranchyk was dropped in Rounds 3 and 4, Zepeda took a hard technical knockdown in Round 5 before ending the shootout in a manner that was as sudden as it was exhilarating and frightening. There were eight knockdowns between the former titleholder (Baranchyk) and former title challenger, but it was Zepeda who kept his composure and held his superior form under the tremendous heat the Belarusian puncher put on him.

The Ring Ratings Panel was impressed enough to advance Zepeda (33-2, 26 KOs) from No. 6 to No. 3 in the junior welterweight rankings. Baranchyk (20-2, 13 KOs), whose only other loss was a decision to Ring champion Josh Taylor, only dropped two places, from No. 3 to No. 5.

“What an excellent fight between Jose Zepeda and Ivan Baranchyk,” said panelist Anson Wainwright. “Take a bow guys, (that fight was) absolutely ‘thrill-a-minute.’ Both guys were at their most dangerous when they were hurt, and on the canvas multiple times. Quite possibly fight of the year and knockout of the year. Zepeda to No. 3 and Baranchyk to No. 5. Rematch please!”

Added panelist Martin Mulcahey: “100% agree it was a great fight between Zepeda and Baranchyk, and (Zepeda) deserves to be elevated for getting up four times… but remember in future evaluations in such a tough division that he was also on canvas four times. Still, Zepeda beat the No. 3 (junior welterweight) and on that performance definitely deserves the No. 3 spot. (The) boxer will always get more credit for getting up than being knocked down, that is the nature of this sport. I am good with Baranchyk at No. 5, (and) can even see him (dropping) further because this fight may have taken a ton out of him. We won’t know until his next outing.”

Nobody agreed with the prospect of dropping Baranchyk further than No. 5.

Added panelist Diego Morilla: “Zepeda-Baranchyk may end up being one of those Gatti-Ward type of fights: great matchup, but difficult to use as a yardstick when you try to imagine how they would fare against better opposition with their leaky defense. I am OK with the proposal. Time will tell whether we’ve been too generous or too harsh with them.”

Junior welterweight – Jose Zepeda advances from No. 6 to No. 3. Ivan Baranchyk drops from No. 3 to No. 5. Said Wainwright: “Maysayo struggled with Hermosillo and looks rather high (in the ratings), (but I) hate to see a fighter drop coming off a win. King Tug (Tugstsogt Nyambayar, rated No. 6) didn’t exactly bash down the door last time out so keep (Magsayo) where he is for now. A definitive and impressive win from (Emmanuel) Navarrete or (Ruben) Villa on Friday could see them jump ahead of these guys.”

Added Mulcahey: “(It’s) forgivable that Mark Magsayo struggled a bit early, (I) think the long layoff did him no favors and Hermosillo is a southpaw who knows how to survive given level of competition he has been in with recently. I agree, though, that (the struggling performance) gives others an opportunity to leapfrog him (in the ratings).”

Added Wainwright: “Super interested in Villa-Navarrete (on) Friday, that’s a really good match up. Will Villa live up to his early promise or will the busiest man in boxing make an impression at 126 pounds?”