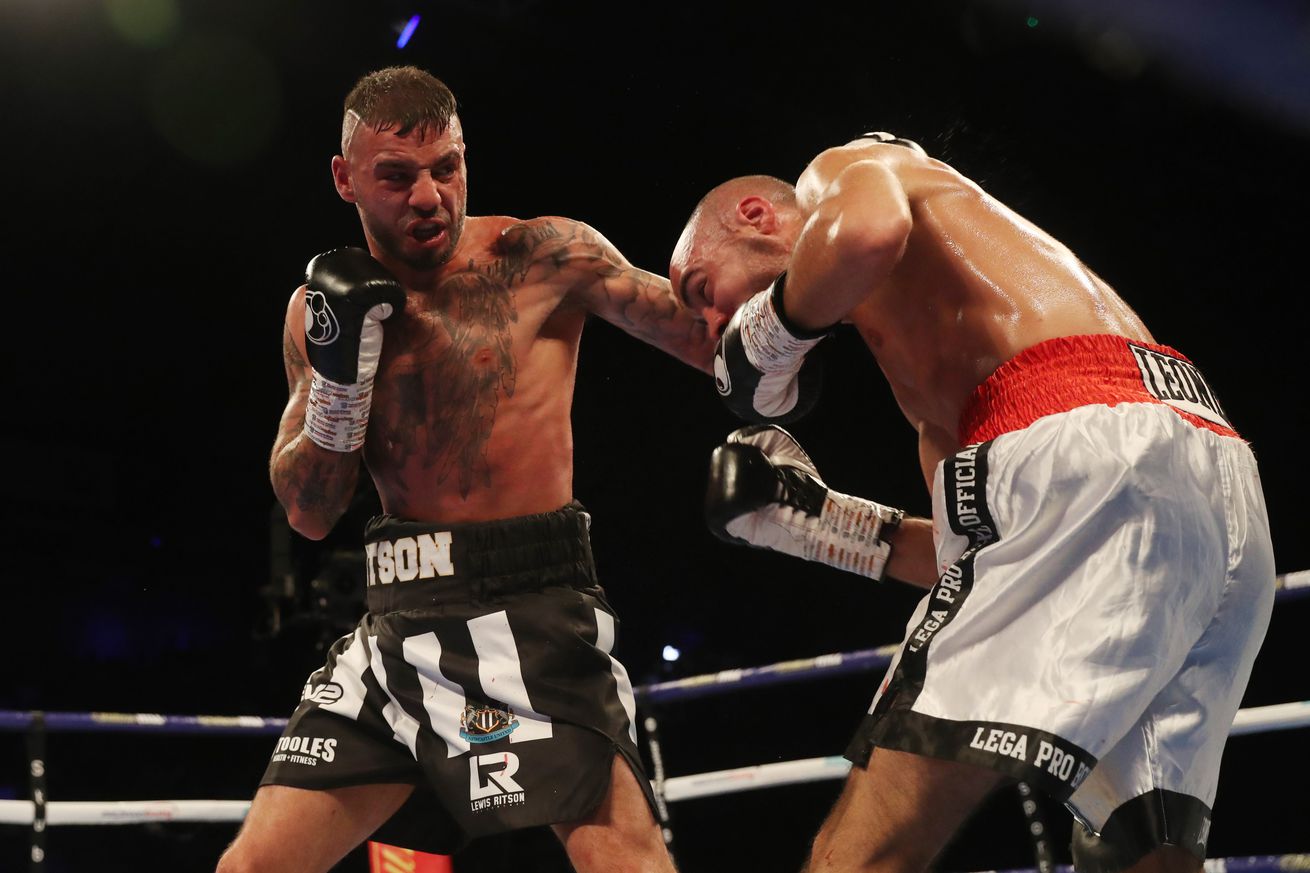 Lewis Ritson gave his career a big boost last time we saw him in the ring just about one year ago, beating Robbie Davies Jr in Newcastle to establish himself as a solid player at 140 pounds after his dreams of a lightweight world title were dashed by Francesco Patera in 2018.

But Ritson (20-1, 12 KO) says that while he’d love to face Josh Taylor in an All-UK world title fight at 140, he doesn’t expect that to happen, with knowledge from Taylor directly:

“No – I’ve done a bit of sparring with Josh for this fight and he said he wanted to unify and then move up divisions. I was putting the feelers out a little bit, saying, ‘What would you do if you won all the titles?’ He said, ‘I’ll move up to 147 pounds.’

“So if he still has that in mind then the belts will be vacant and we’ll fight for the vacant ones. But who wouldn’t like to fight Josh Taylor? St James’ Park, pay-per-view. It would be a great fight to do, but after the Robbie Davies Jr fight [last year] there was maybe a little bit of a chance that it could have happened, but I think the ship has sailed now and he’s on his own direction and I’m on mine.”

WBA/IBF titlist Taylor (17-0, 13 KO) just crushed Apinun Khongsong in one round on Sept. 26, and has his sights set on a full undisputed fight against Top Rank stablemate and WBC/WBO titleholder Jose Ramirez. Taylor-Ritson isn’t a fight anyone is demanding, to be clear, but obviously it would be a fight the 27-year-old Ritson would love to get if possible. And you can never say never in boxing, either, especially considering Ramirez, who just made a WBC mandatory defense against Viktor Postol, now has a WBO mandatory due with Jack Catterall. If Taylor, 29, needs to take an interim fight between now and the Ramirez bout, hey, Ritson could conceivably get a call.

First up for Ritson, though, is Saturday’s fight with former lightweight titleholder Miguel Vazquez (42-9, 16 KO), which the “Sandman” is looking at as the toughest he’ll have to date:

“Miguel Vazquez is the toughest test of my career, 100 percent. He’s been there, done that, got the T-shirt. Even though I’m confident of the win, I think he’s going to show me a few things that will be new to me that I’ve never seen in the boxing ring, so I’ve just got to see what he comes with, adapt and get that win.”

Ritson has already said he feels he can get a stoppage win, and like everyone, he sees the 33-year-old Vazquez as perhaps a bit past his prime. But it’s good to not underestimate a guy like Vazquez, who is crafty, smart, and very experienced. He’s a good spoiler still at the very least.

Ritson-Vazquez will air on Sky Sports in the United Kingdom and DAZN in the United States on Saturday, Oct. 17. Bad Left Hook will have live coverage for the card starting at 2 pm ET.

Alexis Rocha: I’m prepared for the best Rashidi Ellis there is