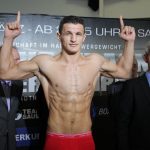 Robin Krasniqi breathed life back into his career on Saturday night, knocking out top-rated light heavyweight Dominic Boesel in three rounds at the GETEC Arena in Magdeburg, Germany.

Krasniqi (51-6, 18 knockouts) landed a thudding right hand nearly two minutes into the round to score the first knockdown, though local referee Oliver Brien inexplicably decided not to give Boesel (30-2, 12 KOs) a count, ruling it a slip. That decision probably ended up hurting Boesel in the long run, as Krasniqi went right back to work, this time putting Boesel flat on his back with an overhand right, where the fight was waived off at the 2:25 mark.

Boesel, who is three years younger than Krasniqi at 30, entered the fight as the no. 9 rated 175-pounder by The Ring. The loss is his first since he was stopped in 11 rounds by Karo Murat in 2017. Prior to the fight, he had won six straight.

Krasniqi has now won two straight, with the previous win coming in August against Stanislav Eschner. That decision win broke a 15-month layoff for Krasniqi, who had fallen short previously in title attempts against Nathan Cleverly and Juergen Braehmer.